The Spotlight Effect: Why it Seems that Everyone Is Looking at You

Do you ever feel like you're on the Truman Show? In psychology, there's something known as the "spotlight effect", which is when you overestimate your presence and the attention others are giving you. 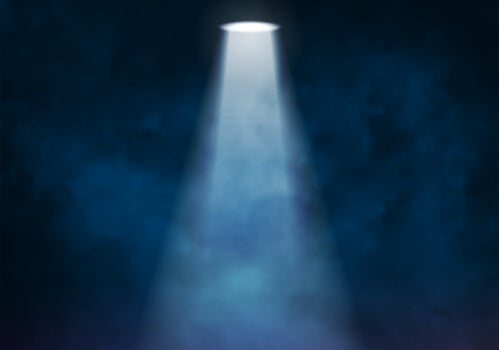 The spotlight effect is when we feel that those around us are looking at us more than they actually are. Dozens of social psychology studies have supported this phenomenon. What’s the explanation behind the spotlight effect? Well, basically, it’s the result of our rampant self-centeredness.

We’re all the center of our own worlds. This doesn’t mean that we’re arrogant or that we value ourselves more than others. Rather, it means that we analyze our entire existence from our own experiences.

You use the feeling that everyone is looking at you or observing you in order to evaluate the world around you, including other people. However, those other people don’t know anything about you nor about the ideas you may have about them. Why? Because they’re also the centers of their own worlds and have other distractions.

When you’re concentrating on something that affects us, you often assume that it deserves other people’s attention as well. This is the heart of what social psychologists call the spotlight effect.

The spotlight effect and the Barry Manilow experiment

The Barry Manilow experiment was conducted at a university in the United States. The researchers asked ten people to visit the psychology department. They invited nine of them at the correct time and took them to a room to fill out some forms.

However, they invited the last participant fifteen minutes later than the rest. This participant entered the office of one of the researchers. They were told to put a large T-shirt over their own clothes, a T-shirt that many would consider “ugly” and “flashy” with a picture of the singer Barry Manilow.

After putting on the T-shirt, a researcher took the participant to the room where everyone else was completing the forms. After spending five minutes standing around waiting, another researcher told the participant that it was okay to be late and that they could start filling out the same forms.

Five minutes later, they were told that their late arrival in the room did affect the results and that it was better for them not to participate.

In the end, the participant was asked to try to estimate the number of people who had noticed they were wearing a Barry Manilow T-shirt. The people selected to wear the T-shirt in the entire experiment consistently said that about eight people had noticed it.

After that, the rest of the participants who were just filling out the forms were consulted. Surprisingly, none of them had noticed the T-shirt.

The participants overestimated the number of people in the room who had noticed the T-shirt. If you put yourself in their situation, their answers make a lot of sense. If you were forced into a room with a T-shirt that you thought was ridiculous, you’d also think that everyone would notice it.

This isn’t just an effect of a Barry Manilow T-shirt. The same test was replicated with a Vanilla Ice T-shirt. The researchers sarcastically stated in their report that Vanilla Ice was a pop icon whose 15 minutes of fame had already passed when this study was conducted”

Turning off the spotlight effect

However, one exception is worth mentioning. In another study, when researchers allowed time for participants to get used to wearing their new pop culture T-shirt before heading to the other room, they weren’t as vulnerable to the spotlight effect.

Thus, when you find yourself thinking that everyone is looking at something you just did, ask yourself if it’s just because you’re obsessed with your own actions. The truth of the matter is, all those other people who you think are looking at you are actually worrying about their own behavior and thinking that others are paying way too much attention to them!

Is it all about you?

One of the most limiting beliefs human beings have is that everything revolves around them. In many areas of our lives, we feel as if there’s a big spotlight shining on every tiny movement we make. We feel that we’re being monitored and that everyone is watching us.

If you feel as if you’re being watched, you’ll spend your entire life wanting to please others. You won’t want to look bad and you’ll tend to spend an infinite amount of energy trying to fulfill the expectations of everyone around you. But remember that scientific evidence shows that other people aren’t as concerned about you as you think they are!

Selfishness in Love: Give Me Everything in Exchange for Nothing
Is selfishness only bad? What are the consequences of selfishness in love? And what does self-love have to do with it all? Read on to find out all about it. Read more »
Link copied!
Interesting Articles
Social Psychology
Learn All about Genovese Syndrome

Everyone, at some point in their lives, has assumed the role of the victim in painful or traumatic situations. We've…