How to Stop Being an Obsessive Person 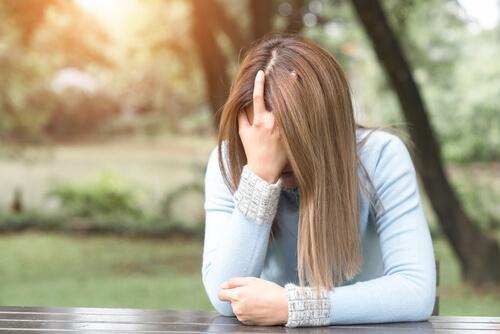 We all know people who think too much. They do so to the point that they can have problems in their daily lives because of it. We are referring to people who keep thinking about the same topic. As a result, they feel anxious, extreme worry, and stress. If this happens habitually, it might be the case that this is an obsessive person.

In today’s article, we’ll see what causes obsessive persons  to fall into these vicious cycles. We’ll also see some of the latest theories on the topic.

Why do obsessions come about?

The cognitive theories regarding anxiety disorders say it is data processing deficits. Data processing deficits are one of the most important factors for starting obsessions. They are also important in maintaining this type of disorder (Beck, Emery, and Greenberg, 1985). Even so, the interest in the cognitive aspects of people with Obsessive-Compulsive Disorder (OCD) is recent. Few studies have been made on the processing of emotional information in obsessive people.

Recent studies show that obsessive people have difficulty with tasks for measuring distortions. And also for cognitive biases (Steketee, Frost, Rhéaume, and Wilhelm, 2001). Studies undertaken over relevant emotional information processing show something. Obsessive people may have a higher level of sensitivity toward stimuli related to their fears.

Obsessive people enter into a vicious cycle when their emotional reactions are similar to those taking place in front of real stimuli. This is when these reactions comes as a result of thoughts on their fears. Obsessions are defined as recurrent and persistent thoughts, images, or impulses. These are felt to be, at one point or another, intrusive and inappropriate. They cause significant anxiety and distress.

The thoughts, impulses, or images cannot be reduced to just excessive worrying on real-life problems. They go much further than that. The person afflicted tries to ignore or suppress these feelings, impulses, or images. Alternatively, they might try to neutralize them through other thoughts or actions.

So, the objective of these actions or behaviors is the prevention or reduction of the discomfort from a negative event. Nevertheless, these behaviors or mental operations might not be realistically connected to that which they attempt to neutralize. On the other hand, they might be clearly excessive.

Obsessions, the anxiety of the 21st century

In the latest editions, the American Psychological Association (APA) has included Obsessive-Compulsive Disorder (OCD) in the DSM. This is due to its handicapping properties. It is also because of its high incidence among the population in recent times.

Those who have this disease feel they are its captives. For hours, they repeat, in the most extreme cases, a specific action without any control over their behavior. Also, these people have a higher propensity for depression or other psychological ailments. These may be the likes of hypochondriases or phobias. This is as a direct consequence of the anxiety produced by the OCD.

According to the experts, OCDs can be classified under several categories. Following are the most important:

Nevertheless, there are many other types of obsessions. Some of the typical ones of modern society are addictions to social networks. Their growth has turned them into another type of obsession. People repeat the same parameters and compulsions as with traditional obsessions.

With regard to obsessions of romantic life, the same thinking, behavioral, and cognitive patterns are repeated. What is different is that, in this case, what the obsessive person wants to control is another person instead of an object. So, in some cases, the uncontrollable desire to be with someone becomes a strong obsession. It is so strong that we end up confusing it with love.

This type of obsession makes you act compulsively to get what you want. That is, to be with that person. But, paradoxically, what ends up happening is that with these obsessive behaviors, you drive the beloved person away forever.

Treatment to stop being an obsessive person

“Obsession implies insatiable love in a relationship. One of the members of the couple is never satisfied with her relationship. She cannot do anything without her partner. She shows strong dependence.”

The treatment for eliminating obsessions is based on the modification of incorrect beliefs the obsessive person has over their fears. In this say, the intention is to reduce anxiety that is caused by thoughts.

At the same time, this type of treatment also seeks to eradicate compulsions. These are involved in the maintenance of beliefs about responsibility (Salkovskis, Richards, and Forrester, 2000). So, the central idea of cognitive treatment is first that behavior lies in emotional responses. Also, behaviors are nuanced and influenced strongly by cognitions and perceptions.

The principal objective of this behavioral focus is to encourage the development of specific behavioral patterns in the obsessive person. These should create changes in the way the patient sees herself and the world around her. For that, it is necessary to emphasize the change of mental processes. Also, thoughts such as the habitual ways in which the person behaves.

“Obsessive thoughts are the firewood that feeds the fire of anger. We can extinguish this fire can only by thinking on things from a different point of view”.

The Fine Line Between Preoccupation and Obsession
When does worry stop being normal and become pathological? How do you know when you've crossed the line between preoccupation and obsession? Read more »
Link copied!
Interesting Articles
Sports Psychology
5 Psychological Benefits of Physical Activity

Meditation is a technique for health and well-being that has a huge impact on everyone: men, women, the elderly, adults,…

Psychology
Are You Sabotaging Yourself with Defensiveness?

Defensiveness is a mode of self-protection, in anticipation of a danger or of someone who could hurt us. When we feel threatened, we…