The Myth of Asclepius, God of Medicine

The myth of Asclepius refers to a deity who had a wide cult in Greece. This god combined Chiron's wisdom with Apollo's healing powers. In fact, his insignia became and is currently the universal symbol of medicine. 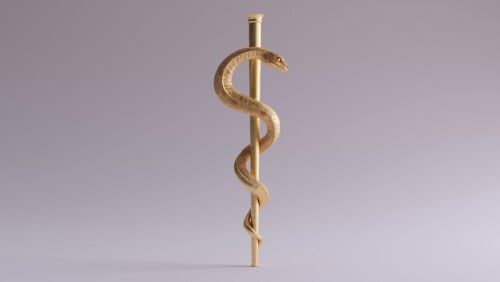 The myth of Asclepius, Aesculapius for the Romans, isn’t only about the god of medicine but about an entire family dedicated to the healing arts. Even though most of the gods had some sort of healing power, Asclepius was the one who mastered this knowledge best, nearly to the point of being able to restore a person’s life after their death.

Historians believe the myth of Asclepius takes after the legend of an Egyptian architect, Imhotep. He lived about 2,000 years before the myth of the Greek god took shape and was the scholar considered the father of modern medicine. Also, the first to practice this profession as such.

Imhotep authored an extensive pharmacological recipe book and he’s the first human being who described clinical cases from a rational and not a magical perspective. At least as far as historians know.

He used opioids as anesthetics and made the first known anatomical descriptions. As you can see, the myth of Asclepius may, in fact, be inspired by this real-life person.

“Let food be thy medicine and medicine be thy food.”

The origin of the myth of the god of medicine

As usual, there are several versions of the myth of Asclepius among the Greeks. The best-known ones indicate that the god of medicine was the son of Apollo, the sovereign deity of the sun and the arts, and of a mortal named Coronis.

Mythology describes her as a rather beautiful woman, so much so that Apollo fell madly in love with her as soon as he saw her for the first time. According to the story, they had sex near a lake and that the god had to transform into a swan to do so. Coronis became pregnant after this encounter.

Afterward, Apollo had to return to Delphi. But before he did, he placed a white crow as guardian of his wife during his absence. However, Coronis became the lover of a warrior named Ischia when Apollo left, and when the crow found out, it quickly flew away in search of its master.

On the way, the white crow ran into a hooded crow who warned against being the bearer of bad news, but the white crow ignored the warning. Of course, Apollo was completely shocked, and, in the midst of his anger, he cursed the bird. He turned its plumage black as punishment and condemned it to live with the reputation of being a dark bird of ill omen.

The myth of Asclepius indicates that Apollo went back to Coronis and, full of anger, shot her with one of his arrows, piercing her chest. Then, he changed his mind as he saw her dying and tried to keep her alive but it was too late. Afterward, he took her dead body to a funeral pyre. Thus, when the fire consumed it Apollo decided to remove their unborn son from her womb.

Asclepius was rather remarkable and so Apollo entrusted Chiron, the centaur healer, with his upbringing and education. This way, the boy grew up under the tutoring of a teacher who mastered the healing arts. Thus, he became familiar with medicinal plants and treatment techniques at an early age.

Asclepius had so many healing abilities that he even learned how to revive a dead person. This aroused the anger of Zeus, who believed it was dangerous to reverse the condition of mortals. So, using a Cyclops, he sent a thunderbolt to kill Asclepius.

Apollo, enraged at the murder of his son, killed the Cyclops who executed Zeus’s plan. Then, using his divine powers, he brought Asclepius to Olympus and turned him into a god. It was from that moment when mortals began to worship him and ask him for favors when they needed help overcoming an illness.

Asclepius’ death also brought virtues to the family he had on Earth. This way, his wife, Epione, acquired the power to ease pain. Of their daughters, Hygieia became the symbol of health prevention, Aceso of the healing process, and Iaso of recuperation from illness.

Panacea, another one of his daughters, became synonymous with treatment. Similarly, his son Telesphorus became the symbol of convalescence while Machaon and Podalirius became the protectors of doctors and surgeons.

Hippocrates later claimed to be a descendant of Asclepius. And the insignia of this god, a serpent entangled in a rod, became the universal symbol of medicine.

Wolf Medicine According to Native Americans
Wolf medicine is a medicine of the soul. It has nothing to do with alternative therapies or other derivatives. Learn more with us! Read more »