Ancient Egypt stood out due to its multiple innovations in medicine, science, and literature. It was also a more egalitarian society than other contemporary cultures. For this and many other reasons, let's delve deeper into one of the most amazing times in history. 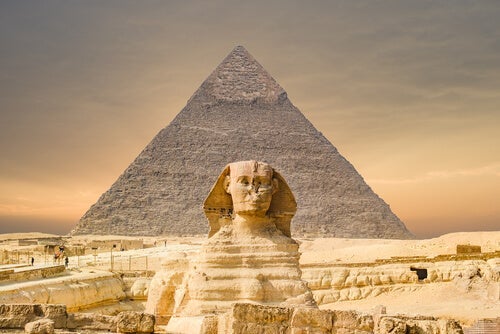 Egyptian culture has been one of the most admired and mythologized cultures in history. We’re talking about probably the most prosperous civilization that mankind has seen; the same civilization that gave birth to great thinkers and incredible scientific, technical, and academic breakthroughs.

In fact, after Mesopotamia, Egypt was the second place where written language developed: the famous hieroglyphs.

The word hieroglyph comes from the Greek hiero, which means “sacred”, and glifo, meaning “writing”. Curiously enough, Egyptian hieroglyphs have a structure never seen before in Mesopotamian territories Sumer and Akkad.

Though it’s been centuries since the practice and interpretation of these images was last used, more people are becoming interested in it. This is due to the revival of Egyptian culture thanks, in large part, to globalization and the rise of social networks.

Despite what popular belief says, slaves didn’t build Egypt’s pyramids. The men who worked on them did it under three-month contracts, were paid fair salaries, and were highly respected, even if they were from humble origins.

The admiration was such that, if they died during work, people buried them in the Giza pyramid complex. That way, they were even closer to the pyramids than the pharaohs, which was a great honor. On the other hand, slaves usually dedicated their time to doing domestic work.

Egyptians worshipping cats is no secret, but people can’t quite understand the extreme veneration they manifested toward them. This is because, according to Egyptian culture, felines were the embodiment of Ra, the deity of the sun, which had come to earth to assassinate the god of chaos, Apophis, a serpent.

Then, Ra’s figure became a subordinate of Bastet, a female deity, protector of homes and warrior goddess. She turned cats into sacred and untouchable beings, who later became domestic animals.

Egyptians created this material, which is used to build construction elements. They used it to give shape to the pyramids’ foundations. However, currently, people debate whether Etrurians took part in its creation as well.

The pyramid of Cheops was the first to use mortar, around 2.600 BC. From this moment and as a result, Egyptians developed different types of plasters, among which the plaster casts, finishing plasters, and decoration plasters.

4. It was a much more egalitarian society than the Greek or Romans

In Ancient Egypt, women had more rights than their Greek and Roman contemporaries. In fact, Egyptian culture allowed divorce and inheritance (like the Celts), and abuse was frowned upon.

Moreover, women were able to have their own businesses and work in numerous types of jobs. Most of them, of course, were health and maternity-related.

“The kingdom of heaven is within you, and whosoever shall know himself shall find it.”

If you take a look at any statue built in Ancient Egypt, you’ll notice that the left foot is always forward. This is because Egyptian culture believed that the left side of the body was the one that gave life since that’s where the heart is.

In fact, during attacks to temples, the enemies used to destroy the statues’ left legs. That’s how they symbolically destroyed the pharaoh’s “life”; this meant the pharaoh was then destined to be forgotten forever.

6. Their mourning color was red

Ironically, black was their good luck color. This belief comes from the color of the Nile’s riverbank, which turned black due to the abundance of loam, that they associated with a good harvesting season.

Red, however, was the color inside coffins. It represented the fury of life, the anger of combat, and, in a less symbolic way, the blood of animal sacrifices that only upper-class families could afford for their funerals.

Egyptian culture has been useful in the development of many cultural (and not-so-cultural) elements that are part of Western culture today. Their medical and scientific innovations remain at the forefront of any other civilization and their culture’s amazing architecture is one of the most unbelievable examples of megalomania to ever exist.

How Do We Relate to Cultures Different from Our Own?
There tends to be very little talk about cultural intelligence and a lot about emotional intelligence. Read more »
Link copied!
Interesting Articles
Culture
Three Instincts That Rarely Fail

"The very essence of instinct is that it's followed independently of reason." -Charles Darwin- "How did you know that?" "It…

Culture
Masturdating: How to Truly Get to Know Yourself

Pablo Neruda was one of the most influential Chilean poets of his time and of history. He left us with…