How a Rumor Spreads

Rumors can completely ruin the reputation of people, discredit causes and undermine morale, spreading them is often used as a propaganda tool. However, if you remain alert, you can detect them effectively. 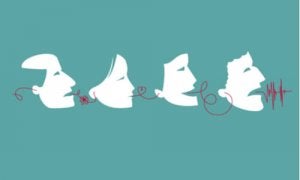 A rumor is a social phenomenon that needs at least one person to create and spread it as well as many others to modify and transmit it. Therefore, understanding how a rumor spreads is critical to avoid them.

Many of the conversations we have on a daily basis are full of rumors. The unfound rumor immerses itself in society. In fact, its fleeting quality is due to its tendency to hide behind the mask of real information.

Therefore, the veracity of rumors is often in doubt, or rather, cannot be proved. Typically, rumors are generated and transmitted through word of mouth. However, it’s true that sometimes they can spread through the media.

Rumors usually arise to influence the thoughts or behavior of people with a specific purpose. Although at first, you cannot prove its veracity, it doesn’t take long for it to spread. At any rate, it’s because rumors tend to be shocking or controversial.

For example, a large company can start rumors about the financial situation of another competitor. In turn, this would create a lack of confidence among customers and workers. Thus, it will create a hostile work environment and therefore harm the competitor.

“We must emphasize that, as new technologies arise, rumors spread like wildfire through social media.”

Characteristics of a rumor

Before delving into how a rumor spreads, we’ll explain its main characteristics. By doing so, you’ll be able to understand this phenomenon adequately and all it entails.

Every rumor has to have a certain degree of public interest. Otherwise, no one would bother communicating it, nor waste their time listening to it. Thus, it would soon be forgotten.

So, in order to achieve greater impact, the message must be short, simple, and relevant to the recipient. This concept is key to understanding how a rumor spreads.

Its goal is to convince

A rumor’s goal is that people accept it as an explanation. Its goal is to convince. Therefore, its main purpose is that people believe it. So, the person who starts or transmits the rumor defends its accuracy. For this reason, they demand trust in its veracity.

On the other hand, the original source of the rumor is usually attributed to someone important, to make it seem as truthful as possible.

“To spread a rumor is to share a belief, a claim by someone who seems or professes to be a witness.”

The information is not verified

As we said before, the information that a rumor transmits has not been verified. Therefore, we settle for trusting that the source is reliable.

The underlying foundation in our thought process to believe a rumor is that we don’t make sure all the information we receive on a daily basis is true. And, even then, in most cases, the information is correct anyway.

The rumor as a weather balloon

The originator of the rumor can also use it as a “weather balloon.” In other words, before making an important decision, first, they release incomplete and brief information to the public. Afterward, the information reaches the target audience and returns full of opinions and other useful information.

For example, as a result of the difficult economic situation during the last decade, many governments released public messages promoting policies of economic austerity and loss of workers’ labor rights. The purpose of these messages was to gauge the response of the population and see how the decision would affect voters’ decisions during the elections.

How a rumor spreads and originates

There are certain conditions that originate the birth of a rumor. On the one hand, the content of the message must consist of ambiguity. On the other hand, it should immediately capture other people’s attention.

If you were to study how a rumor spreads and then create your own, the first thing to keep in mind would be to have a good story that catches the recipient’s attention. In addition, it’s important to mix some truth with a bit of exaggeration. Similarly, add as many details as you deem appropriate to give it some truthfulness.

However, you mustn’t forget that during the rumor’s transmission, others will add new content to the information. Some of it will stick while most will be forgotten. In this way, the original message changes.

“Understanding how a rumor spreads is the key to identifying one.”

Findings from the investigations of Allport and Postman lead to the following basic laws to describe the movement of rumors:

In conclusion, much of our daily conversations consist of rumors. All topics, from the moral behavior of a co-worker to the future of the country, attracts the interest of captivating and disturbing rumors.

Thus, when accurate and complete data on an issue isn’t available, rumors proliferate. Since rumors can completely ruin the reputation of people, discredit causes and undermine morale, spreading them is often used as a propaganda tool. However, if you remain alert, you can detect them effectively.

Lies in Social Networks
Lies in social networks, as in other areas of our lives, invade us constantly. Find out why people lie and what are the benefits according to science. Read more »
Link copied!
Interesting Articles
Social Psychology
The Aladdin Factor and Assertiveness