The Myth of Atalanta, the Beautiful Hunter

The myth of Atalanta is about a female figure that aroused the admiration of the Greeks due to her courage and military skill. She's the symbol of the capable, self-determined woman who eventually falls out of favor when she falls in love. 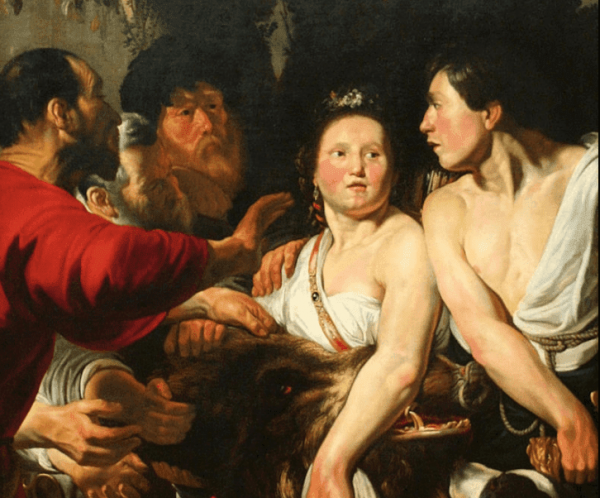 The myth of Atalanta is about a strong and self-reliant female figure, something that’s quite rare in Greek mythology. She’s a beautiful hunter specifically dedicated to that activity because she loved it. Thus, she developed it rather skillfully.

According to the myth of Atalanta, the oracle said when she was born that, if she ever married, she would morph into an animal. She was the daughter of Eschaeus and Clymene, two characters who came from the Boeotian culture in Western Greece. The truth is that her father longed to have a boy and didn’t want a daughter at all.

Therefore, the father didn’t hesitate to abandon his little daughter on the side of a mountain, as soon as she was born. However, a bear took pity on the little girl. The myth of Atalanta says that the animal breastfed her and took care of her until some hunters found her and decided to adopt the little girl.

“It’s our choices, Harry, that show what we truly are, far more than our abilities.”

The myth of Atalanta, a strong woman

The myth of Atalanta says that this woman wasn’t exactly feminine. Her wild origin made her passionate about nature and hunting. She soon became a beautiful woman, but she didn’t want to be like the others. So, she decided to devote her life to the goddess Artemis, protector of the hunt, and imitate her in everything.

The cult of Artemis required her to remain a virgin all her life and Atalanta had no problem with that. The goddess also advised her to stay between the mountains and the fields and devote herself fully to hunting. Therefore, Atalanta developed great physical skills and learned to handle weapons with great dexterity; the javelin, in particular.

The myth of Atalanta says that two centaurs called Hilo and Reco tried to rape the beautiful girl, subjugated by their desire to possess and dominate her. Centaurs were beings with a human head, arms, and torso and a horse’s lower body and legs. They were mostly wild and dominated by their animal passions. The girl confronted them and defeated them.

Atalanta was a woman fond of combat and adventure. Some say that she was the only woman who participated in the expedition of Jason and the Argonauts.

However, what made her popular was her participation in Calidon’s boar hunt. Mythology says that the other hunters refused to let her tag along, but that the hero Meleager allowed the girl to join the group.

The myth of Atalanta states that she was the first to injure the beast and that Meleager witnessed it. He was the one who finally killed the animal, but he gave her the skin, in honor of the courage she displayed.

Later on, Meleager’s uncles were opposed to the girl being given this award because they considered her unworthy of it. However, the hero confronted his relatives and finally killed them for opposing his decision. He then returned the boar’s skin to Atalanta, who became widely respected by all.

Because she was a servant of the goddess Artemis, what the oracle said at her birth, and her strong character, Atalanta was reluctant to be with a man. However, suitors abounded and besieged her. To put an end to the annoyance, the woman announced that she would only marry the man who could beat her in a race. However, if the man lost, she would kill him.

Despite the terrible warning, many signed up for athletic competition with her. However, she defeated them all without exception. There were already many who had gone down when a young man named Hippomenes appeared. Aphrodite, the goddess of love, wanted to help him win.

Aphrodite gave him some golden apples, which came from the famous garden of Hesperides. So, when the usual race took place, the young man began to drop the apples one by one. Atalanta, enraptured by the beauty of these magnificent fruits, stopped to pick them up every time Hippomenes dropped one of them. This way, she lost time and he beat her in the race.

The two youngsters got married and were happy hunting and fighting side by side for some time. However, they made love in the Temple of Cybele, goddess of Mother Earth, and she went into a rage. Thus, she turned the couple into lions and condemned them to pull their chariot forever. The fountain of Cybele, on the Paseo del Prado in Madrid, it’s a reminder of the myth of Atalanta.

Link copied!
Interesting Articles
Stories and Reflections
The Story of the Ring: Who Determines Your True Worth?