The Mysteries of Octopus Intelligence

Read all about octopus intelligence in this interesting article! 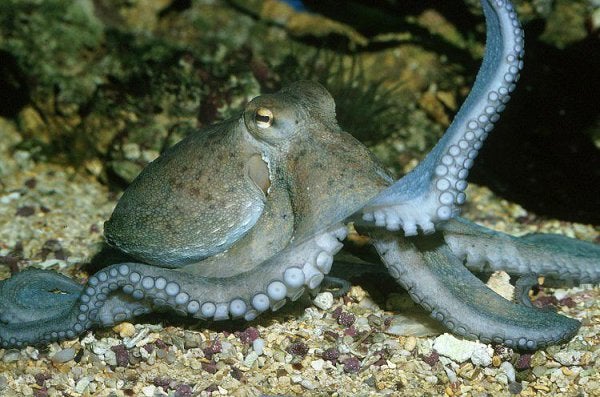 Octopus intelligence is a very interesting subject. These creatures have an amazing mind. Interestingly enough, the more than 500 million neurons octopuses possess are located in their tentacles. An octopus tentacle helps it feel, smell, and even make decisions.

Those who work with these animals know that they can be troublesome. There are many stories about escapist octopuses, or of them getting into other tanks to steal food.

Some scientists believe that octopus intelligence is no big deal and that their skills are just ecological intelligence, meaning that this animal develops strategies depending on their environment. Thus, octopuses are just like any other animal trying to figure out how to get food.

Nonetheless, Piero Amodio, a researcher at the University of Padua, shared a video that went viral. In the video, you can see an octopus getting a shell and hiding in it. Later, the octopus takes the shell with it because it knows it might be useful in the future. That’s planning right there.

Characteristics and Mysteries of Octopus Intelligence

Over 275 million years ago, cephalopods had a hard shell. That shell could protect them from predators but it made it hard for them to get food. Getting rid of the hard shell has allowed them to freely explore their environment, enter narrow openings, gain the strength to break shells and rocks, and hunt more precisely.

However, not having a shell can have its cons as well. That’s why octopuses have come up with ways to protect themselves. Amazingly, octopus intelligence goes way beyond this. Peter Godfrey-Smith, an Australian philosopher and octopus expert, has been exploring the origins of consciousness through cephalopods.

Other Minds: The Octopus, the Sea, and the Deep Origins of Consciousness is a very interesting book that can help you better understand octopuses and even yourself. In his book, Godfrey-Smith talks about his encounter with a giant cuttlefish in Australia. This fish wasn’t scared of him and came closer and was very curious about Godfrey-Smith. That delicate contact was truly special for the philosopher.

Octopuses Can Modify Their Genetic Code

Eli Eisenberg, a researcher at Tel Aviv University, studied octopus intelligence to discover how these creatures can manipulate their own genetic code.

Cephalopods adapt their nervous system according to their environment’s climatic changes. Their organism shuffles their ribonucleic acid (RNA) and sends new proteins to its genes to better adapt to the environmental changes. Human beings can do it too, but at a painfully slow rate called evolution. Octopuses do it based on their current needs.

The Same Amount of Neurons as Dogs

Octopuses have roughly 500 million neurons, the same number dogs have. Cephalopods’ nervous system goes through their tentacles, so these represent nine brains: a central brain and eight peripheral ones.

Tentacles are essential to octopus intelligence. Their tentacles help them explore their surroundings and smell, taste, and even make decisions. Although each tentacle can make its own decisions, they decide to work together, which is probably for the best.

Biologists have discovered that some octopuses communicate among themselves through a language similar to Morse code. Also, those who have seen an octopus in action know that they can be incredibly creative.

If they feel threatened or unconformable, octopuses launch a water stream at their attackers. They develop manias, form associations, have favorite toys, and also not so favorite ones which they consequently destroy. They can misbehave and form loving bonds and also feel hatred for others.

In short, learning about octopus intelligence can help you understand your own consciousness.

An Animal’s Eyes Have the Power to Speak a Unique Language
When I look into the eyes of my dog, my cat, or any other animal, I do not see an “animal.” I see a living creature like myself, a friend, a soul that feels Read more »
Link copied!
Interesting Articles
Cinema, Television, and Psychology
4 Films That Will Touch Your Heart

There are many types of headaches, but the ones triggered by stress are the most common, familiar, and persistent. These headaches…