The Heartwarming Story of Christian the Lion 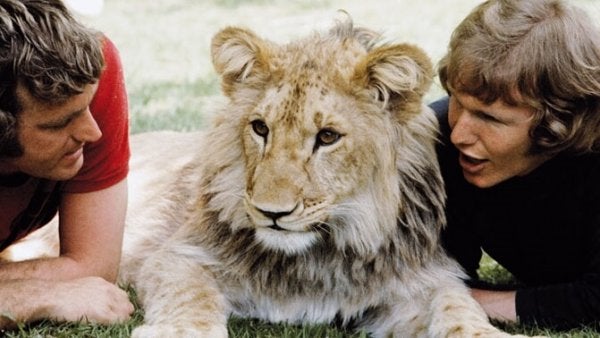 The story of Christian the lion is a surprising tale about the endearing love that can arise between man and other animals. It’s a real story, which has been documented, and which raises some questions that are still unresolved.

It all started in London, in 1969. A couple of young Australians, named John Rendall and Anthony “Ace” Bourke, went shopping at Harrods. To their surprise, they found a lion cub for sale. It was just a cub and the owner wanted to get rid of him because he had ruined his merchandise the night before.

“The greatness of a nation and its moral progress can be judged by the way its animals are treated”.

The boys bought the lion and took it to their house. Together with a couple of friends, they started to raise him and they noticed that he was very sociable and nice. When the little cub turned one year old, it was no longer possible to have it in the house. They decided then to take it to a furniture store that they managed and that was curiously called “Sophistocat”.

The sad goodbye to Christian the lion

Neither Rendall nor Bourke ever imagined that their little friend would grow at such an accelerated pace. In a short time it was impossible to keep him in the furniture store. He did not fit anywhere and, unwittingly, he caused a lot of destruction everywhere. So they went to a friend who was a priest and asked him to let Christian stay in the parish cemetery. The priest agreed.

Christian, the lion, continued to grow. He was already an adult and ate outrageously. Maintaining his diet cost a fortune to his human friends. They began to understand that soon it would be impossible to allow him to live in London. After all, he was an animal. What if he became dangerous? He was always very friendly, but you never knew …

Two film actors visited Christian and suggested that they put him in the hands of George Adamson, a famous Kenyan conservationist. He would take care of bringing him to his natural habitat and allowing him to live like a real lion. The boys agreed, not without feeling great sadness. It was the best for everyone.

Christian returns to the jungle

The youths agreed to take Christian to the Kora National Park in Kenya. It was the ideal place for him to start a new life. His conservationist friend reunited him with another older, male lion, whom everyone called “Boy.” He also joined them with a female, to form a new herd. Little by little the animals moved away from the humans, until one day they did not return anymore.

A year after this, Rendall and Bourke took the initiative to go visit their friend Christian the lion. It was a bit of a crazy idea. He had already returned to his habitat and now acted like an ordinary lion. Anyway, they wanted to at least see him, to know that he was okay. The conservationist alerted them. They must be very careful. Christian could attack them.

The young men went to the outskirts of Kora and waited a while. Then they started calling Christian, but he did not show up right away. At last, a lion was seen peeking cautiously among the rocks. The boys kept calling him. Quickly, the lion reacted and went out to meet his old friends. Against all odds, he remembered them perfectly. He threw himself at them, hugged them and licked their faces. All this was recorded on video.

A story without answers

A year later, something even more extraordinary happened. After the last meeting, Christian the lion returned to the jungle. They could see that he had become king of a pride of lions. From one moment to another, he disappeared. Nothing was heard from him in more than nine months. His human friends wanted to visit him again, in any case.

Without knowing how, or why, a day before the arrival of the boys, Christian returned to roam in the places around Kora. The same scene of the first meeting was repeated the next day. The lion looked at them cautiously first and then rushed at them, as if it were the same puppy they had raised. The only difference is that he had already doubled in size since the last time they had seen him.

The story of Christian the Lion and his human friends became a documentary that contains real images. They also wrote a novel based on his story and countless articles in various newspapers and magazines around the world have been written. There are still no definitive explanations about this endearing and wonderful relationship between a “beast” and a couple of boys who decided to offer their love and, more importantly, understanding his future needs.

10 Animal Movies to Help you Think about how we Treat them
Animal abuse has to go out if we want a more peaceful society. We usually treat them as tools or objects, but there are also animal movies out there that show us a different side of things. Read more »
Link copied!
Interesting Articles
Culture
6 Benefits of Having a Pet

Art and Psychology
Gustav Klimt and the Search for Psychological Truth

Gustav Klimt was born in Vienna, Austria, in 1862. Klimt is famous because he founded the Vienna Secession movement. He…

Culture
What Exactly Does it Mean to Have Attitude?

You've probably heard the phrase "have attitude" at some point. Although its meaning might seem obvious to some, this phrase actually…