Can a person shatter into a thousand pieces? People who suffer from the glass delusion believe they can. 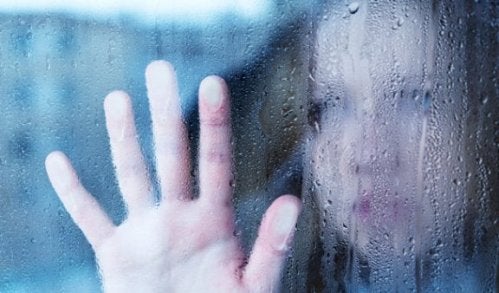 There are people who believe they can shatter into a thousand pieces if someone or something bumps them even slightly. This is the glass delusion. People who suffer from this believe they’re as fragile as glass. The truth is, however, that they’re actually not.

What do we mean by “delusion?”

During the 17th century, experts based the concept of madness on delusions. This happened to such an extent that “being crazy” was the same as “having delusions” and vice versa. These days, people also have their stock image of a crazy person. If you ask a person to describe their stereotypical image of a “crazy person,” they’ll probably say someone who believes they’re Napoleon or that aliens are after them.

The definition that experts use and reference the most these days is the one Jaspers came up with in his book General Psychopathology (1975). For Jaspers, delusions were false judgments. They persist because the individual maintains them with a high level of conviction. In fact, experience doesn’t influence them and neither do irrefutable truths. Aside from that, their content references impossibilities.

The glass delusion as a psychological malady in the Middle Ages

It would seem that this disorder became popular when Charles VI suffered from it himself. This, of course, happened during his reign several centuries ago. In fact, historians record that Charles VI was a monarch with schizophrenia, porphyria, and histrionic personality. According to certain accounts, he killed a member of his court during a psychotic episode.

Charles IV prohibited his subjects from touching him. That’s because he was afraid that he’d disintegrate like a fragile piece of glass. In order to avoid what he feared, he would wrap himself in thick blankets and would spend hours locked away in his room. That way, he avoided any person who might touch him and shatter him.

Dutch psychiatrist Andy Lamejin has currently confirmed that one of his patients suffers from this disorder. It looks like it’s not just a thing of the past, right? Recently, his patient came to him complaining of symptoms similar to that of a delusion.

This patient complained of feeling as if he were made of glass and even transparent to others. According to this patient, there was a switch inside of his brain that allowed him to change states. He claimed he could change from being invisible to visible at will.

Living with the obsession of avoiding being shattered

According to documentary sources, some people with this illness would tie pillows to their backsides. They would do this to avoid shattering when they had to sit down somewhere. Experts of the time also observed that they would only relieve themselves standing. That way, they could avoid sitting down and breaking their bones.

Another related delusion is the “bottle delusion”, which is when patients believe they’re living inside of a glass bottle. They’re obsessed with not shattering themselves. They direct all of their efforts toward never leaving this supposed bottle as a thousand glass pieces.

Psychotic patients have transmitted this disease among each other via the phenomenon of imitation. The mentally ill sought a reason to justify their feelings of fragility. Thus, those stories reached the French royal family and helped to popularize this syndrome. Let’s not forget the popularity of Miguel de Cervantes’ The Lawyer of Glass.

What’s the cause of the glass delusion?

One of the theories about the source of this problem is that the glass delusion might be related to defense mechanisms. This defense mechanism arises in people who are under a lot of pressure. Additionally, these people tend to feel the pressing need to display a specific social image. Thus, their symptoms might be a response to their fear of projecting vulnerability.

Another hypothesis is associated with the development of glass. This doesn’t seem strange because the first cases of the glass delusion arose at the same time this material did. Whatever the case may be, we’re talking about a serious mental disorder. Its treatment requires antipsychotics. One example of such a drug is haloperidol. The problem also requires psychotherapeutic support. Anyway, we can tell you something that’ll set your mind at ease: these days, this syndrome is extremely uncommon.

I Might Do a lot of Crazy Things, But I’m Not Crazy
Doing crazy things is a sign of freedom that has nothing to do with being crazy. It just gives you the chance to take a different path than what most consider normal. Read more »

Delusions are characteristic of mental or neurological disorders. Thus, they help diagnose psychotic disorders. Psychiatrist and philosopher Karl Jaspers was…