The genesis of psychosomatic disorders happens during sustained stressful situations. In this regard, sustained tension can affect several body systems. Continue reading to find out more about the connection between psychophysiological disorders and stress. 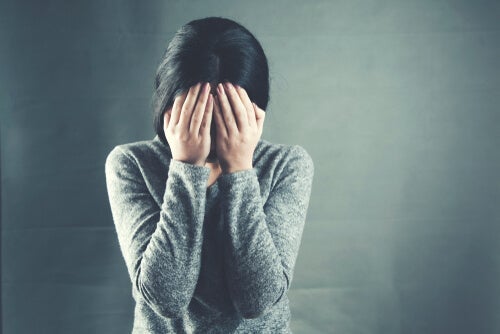 Today’s article is about psychophysiological disorders and stress. Who hasn’t been under that state of overactivation called stress? Even though it’s always associated with an unpleasant sensation, it’s useful.

Stress could have counterproductive consequences when it’s high in intensity or continuity. In fact, the relationship between stress and mental disorders is a subject of many studies; they discovered that many of these begin with stress.

Professor J. Carrobles (1991) from the Autonomous University of Madrid defines stress as:

“Stress is a state of sustained overactivation experienced by a person in different situations considered excessive. They occur under conditions of scarce control and social support resources in a subject.”

Nevertheless, it’s necessary to unravel the term stress, as it has two meanings. You can break it down into “distress” and “eustress”.

What’s the difference between stress and anxiety?

To understand the relationship between stress and psychophysiological disorders, you must differentiate it from anxiety. This is because the body’s response is often similar.

Anxiety is about danger, either real or so interpreted by a given person. This doesn’t happen in stressful situations because they don’t have to be unpleasant or dangerous. Unless a person perceives a situation as dangerous, they won’t usually run away as it’s easier to deal with it.

In the face of anxiety, the typical response is to escape. This position remains through the anxiety-avoidance-anxiety mechanism. If you perceive something as dangerous or harmful, it’s logical for you to have the typical response to flee. If it’s dangerous, you’ll need some tools to defend yourself from such danger. And people don’t usually have such feelings of self-efficacy. They perceive something as dangerous because they’re unable to fight it.

In addition, for stress to produce harmful effects, it must continue over time. In the case of anxiety, even if only for a short period of time, it’s already harmful. Mainly because it can affect the social and emotional functioning of a person in a short time.

The connection between psychophysiological disorders and stress

“Homeostasis” – homo = “return to,” stasis = “balance” – refers to the return to bodily balance. All humans have an internal environment and vital signs and these have a tendency for balance. That is to say, the agency implements actions to solve any imbalances a person might develop.

When you don’t reach homeostasis, you’ll experience stress. If you have to implement conscious strategies because they’re not working automatically, then it’s normal not to reach that state of equilibrium. Instead, you reach “hemokinesis”, a state of imbalance.

The physiological responses of stress

Even though it’s clear that stress can lead to irritability, apathy, anxiety, anguish, and anger, it also leads to physiological or bodily responses that you may not notice. These are very relevant to the relationship between stress and psychophysiological disorders. This is because when you maintain them over time due to the stressful situation, they could lead to certain disorders, some psychosomatic.

The physiological responses to stressful situations are the result of various bodily systems, such as the autonomic nervous system and the central nervous system.

In the physiological response to stress, the somatic system is responsible for the electromyographic response. That’s the electrical activity produced by skeletal muscles, such as eye movements and breathing.

Thus, there may be an increase in blood flow to large muscle groups during stress: back, arms, legs. In addition, there may also be generalized muscular tension.

The stress responses this system takes over are related to the cardiovascular system: heart rate, blood pressure, and blood flow. They also regulate body temperature, sexual excitement, and electrodermal responses. That is the skin power level and its conductive response. In addition, there’s salivation and gastrointestinal responses.

Therefore, in the face of stress, there may be an increase in your heart rate, renal activity, peripheral vasoconstriction in your hands and feet, and an increase in the blood clotting factor.

As for the responses of the central nervous system, there are electroencephalographic responses and evoked responses.

Finally, there are also responses to stress that come from the endocrine and biochemical systems. These can lead to various hormonal changes and an increase in immunological activity at the beginning, it later decreases.

As with anxiety, certain body systems are deactivated in response to stress because they’re not useful. Given the specific response of an anxiety attack, these systems either deactivate or reactivate. But, in a sustained situation of stress, they could affect a person’s health.

The influx of blood in the digestive tract goes down, leading to possible problems such as ulcers, colitis, and irritable bowel syndrome. This also occurs with the genito-sexual system, where stress can lead to sexual dysfunctions in arousal, erection, lubrication, and tumescence.

The genesis of psychophysiological disorders due to stress

Psychosomatic disorders are the physiological conditions of psychological origin. Stress is something that, in principle, shouldn’t affect a person’s physical well-being. But it can lead to very unpleasant diseases and their symptoms.

They’re proof of the influence of the “mind” on the well-being of your body. Contrary to what many people think, they always go hand in hand.

As we mentioned above, stress itself isn’t exactly bad. However, when it turns into distress and it shows the following characteristics, chances are it’ll affect your psychophysiological well-being.

Thus, the factors pertaining to stress and psychophysiological disorders are:

Many times, you can’t get out of stressful situations and must maintain them over time. However, many resources can help you reduce stress to avoid the result of the relationship between stress and psychophysiological disorders.

The resources for sustained stress you can use are:

Thus, the relationship between stress and psychophysiological disorders seems clear. Thus, to avoid losing your well-being in the face of stressful situations you can avoid, you must take charge and allow your body to reach homeostasis beyond a period of stress.

Psychophysiological Disorders: What Emotions to Do Your Body
When you're anxious do you get stomachaches and headaches? It's easy to see that your emotions are closely related to your physical pain. Read more »
Link copied!
Interesting Articles
Psychology
What is Musical Intelligence? How Can I Improve It?

Psychology
It's Not Selfish to Think of Yourself

If only there were a thermometer that could measure goodness and badness. If only we could detect selfishness the second it shows up.…