Discover defense mechanisms for neurotic patients in this interesting article! 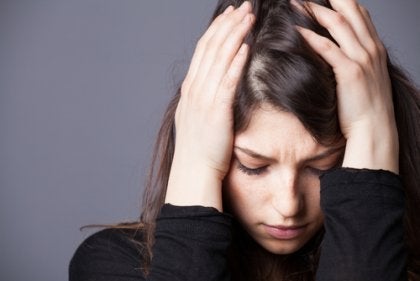 While neurosis and psychosis sometimes “coincide”, the mechanisms that drive them are different. The distinction lies in the relationship between reality and the way that they construct reality. With neurosis, for example, fantasy is the response to fixations. With psychosis, on the other hand, a complete substitution that seeks to recover what was initially denied prevails.

This is when your mind prevents thoughts that generate anxiety from entering into your consciousness. It’s the most basic defense mechanism and is always the first to kick into gear.

Displacement is when you substitute your true, anxiety-producing and intolerable desire for another that’s acceptable and doesn’t cause anxiety. This defense mechanism can explain sudden phobias. For example, if you feel dirty and you’re embarrassed to say so, you might express disgust and fear towards cockroaches instead.

Neurotic defense mechanisms based on identification

This psychological process consists of the tendency to increase feelings of personal value by adopting traits of someone you admire.

Melanie Klein described this defense mechanism as the fantasies into which the subject inserts themselves (fully or partially) into another object in order to control, harm, or possess it.

Identification with the aggressor

Anna Freud and Ferenczi wrote about this mechanism. Here, the subject introjects some characteristic of the person that causes them anxiety. They go from being the victim to the aggressor.

The mechanism by which the individual projects their own unrecognized and anxiety-producing traits onto another person or object. This particular defense mechanism is present in psychosis, neurosis, and perversion.

Ferenczi described this mechanism, which is when an individual adopts other’s traits or beliefs with no regard for who they actually are or what they actually believe. For example, someone with depression might adopt someone else’s attitudes and preferences.

The “healthy” version of this would be identification. Identification implies adopting aspects of other people that you find desirable. Introjection, on the other hand, is like swallowing without chewing and results in inner conflict.

Defense mechanisms based on impulse transformation

The mechanism by which an individual represses “unacceptable” thoughts and expresses them through their opposites. This defense mechanism explains mania, which hides repressed depression.

The mechanism by which you repress a perversion and substitute it for something more acceptable. That way you can secretly satisfy your forbidden pleasure. For example, someone who’s turned off by their partner but can’t accept it might repress that emotion and express it in the form of an allergic reaction.

This mechanism seeks to substitute an unacceptable object or activity for one that has a higher social or ethical value.

The rational justification or thoughts or behavior that produce anxiety. This is different from intellectualization because it isn’t a systematic avoidance of the effects. Instead, the individual attributes more motivations that are more plausible than true, giving them a rational or ideal justification.

The individual tries to give a logical formation to their conflicts and emotions in order to control them. It combines the emotional isolation of a painful event with a rational explanation.

The mechanism by which the individual isolates certain upsetting thoughts or feelings from others. That way, they’re still aware of the thoughts and feelings but they lack any associative connection. For example, a child might feel anxious because they’re a victim of abuse, but they aren’t capable of seeing the relationship between their anxiety and the abuse.

The conscious form of a repressed idea or wish that has been modified or disguised. It can manifest itself in three ways: dreams, symptoms, and certain kinds of artistic expressions.

According to Freud, this is when the individual actively tries to undo what has already been done. They attempt to make it seem like a thought or situation never really occurred.

This consists of transforming the impulse into its opposite. For example, if your significant other leaves you, the love you feel for them transforms into hate. You now feel hate towards the same object you felt love for. The impulse has transformed, but the object stays the same.

According to Freud, denial consists of eliminating a bothersome representation not by canceling or rejecting it, but by denying the reality of the perception connected to this representation.

This is a psychotic defense mechanism against anxiety related to dissociation and death. One part of the self stays in operational contact with the undisturbing reality. The other part, however, loses touch with reality and rejects all aspects that are too distressing. If it’s necessary, the individual might even reconstruct a new, more calming and desirable reality.

This the limited state mechanism that fights against the distress of loss and sets aside bothersome representations. For example, an individual that projects the bad part of their reality on the exterior, but doesn’t lose touch with themselves. The excision doesn’t involve a loss of contact with reality.

This is the rejection of primordial meaning when the child differentiates themselves from the mother. This condemns the child to not become a subject inside a pre-existing linguistic universe and predisposes them to psychosis.

In conclusion, defense mechanisms are divided into different groups that relate to each other with levels of defensive functioning. With neurosis, these defense mechanisms protect against a reality that can’t be tolerated. However, they continue to be in contact with reality.

Do All Roads Lead to Neuroticism?
Neuroticism makes people with it vulnerable to psychological disorders because it's associated with both poor stress management and a tendency to expose oneself to psychologically damaging stimuli. Read more »
Link copied!
Interesting Articles
Basic Psychological Processes
The Difference Between Motives and Motivation

Cognitive rigidity is a characteristic of people who are captive to their own behavioral patterns. They're those who don't accept…

Interesting Articles
Healthy Habits
Listeners Need to Be Heard Too