The Entorhinal Cortex and Memory

In recent years, scientists have made headway in understanding the entorhinal cortex. They discovered, for example, that stimulating this area promotes neurogenesis and improves spatial memory. 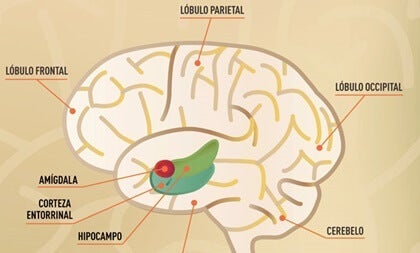 Researchers have known for a while that the first signs of Alzheimer’s originate in the entorhinal cortex. This area of the brain directly connects to the hippocampus and is crucial in processes related to episodic, autobiographical, and spatial memory. It’s also the structure that protects your identity and the ability to adapt to your surroundings.

In recent years, advances in neuroscience have yielded a lot of hope. Scientists now understand, for example, how the tau protein accumulates in that region of the brain and promotes slow neurodegeneration. A study published in the Journal of Neuroscience, for example, provided some very positive data.

Researchers found that applying electrostimulation to the entorhinal cortex promotes serrated granular cell production. Then, these cells gradually become part of the hippocampal network. In other words, it causes neurogenesis, which tends to cause mild improvement in memory-related cognitive processes.

These are small advances, no doubt about that. Today, however, strategies based on non-invasive electrostimulation of the brain are providing interesting results. Let’s learn a little bit more about the entorhinal cortex, shall we?

Functions of the entorhinal cortex

The entorhinal cortex is an area of the brain located in the medial temporal lobe. Scientists often define it as the “interface” that works in constant communication with the hippocampus and the neocortex. It’s divided into two regions: medial and lateral.

The entorhinal cortex is a structure with multiple connections to different cerebral areas. For example, it works in conjunction with olfactory and visual paths. It’s also connected to the temporal, parietal, and frontal lobes. However, as we mentioned above, its main job is to make a direct path to the hippocampus.

It’s also important to know that interest in the entorhinal cortex emerged at the end of the 19th century with Santiago Ramon y Cajal. While he was trying to understand how the nervous system worked, he discovered a peculiar part of the temporal posterior cortex that got his attention.

He was fascinated to see its many connections with the rest of the brain. Now let’s see what this area of the brain is responsible for.

The entorhinal cortex is key for making two types of memories: declarative and spatial. That means that a constant connection with the hippocampus allows us to, among other things, integrate the events that make up our declarative, episodic, and semantic memory. This is the region that shapes, in a way, your identity, inner narrative, and personal history. At the same time, it orients you in the space around you and helps you adapt to any context.

As we mentioned above, the entorhinal cortex sends information to and receives information from the hippocampus, which is the most important part of the limbic system. Don’t forget that this area is also connected to the amygdala. As a result, every memory you have also has an emotional component.

The entorhinal cortex, that small and mighty structure, integrates and stores all of these processes.

Nevertheless, in the case of human beings, this connection makes olfactory memory possible. That’s where we create connections with past events and certain smells.

The entorhinal cortex and illness

Alterations in the entorhinal cortex are associated with a variety of disorders. The most well-known is Alzheimer’s disease. Here, the accumulation of the mutated Tau protein, along with the neurofibrillary tangles that they cause, tend to occur mostly in this area.

Columbia University Irving Medical Center conducted a study that used functional MRI to show that this area of the brain is like the door to this devastating illness. Studies also show that entorhinal decline leads to cognitive failures that cause a reduction in hippocampal volume over time. That’s a classic problem in patients with Alzheimer’s-like dementia.

There’s another illness associated with the entorhinal cortex: schizophrenia. Studies like this one from the University of Udine (Italy) showed that patients with this disorder have a reduced entorhinal cortex. This reduction is also more pronounced on the right side, causing a marked structural asymmetry.

In conclusion, a better understanding of the architecture and functionality of the brain is undoubtedly positive for humankind. For example, knowing how these serious illnesses relate to areas such as the entorhinal cortex makes it easier to develop appropriate strategies to slow their advance or improve the quality of life of these patients in the near future.

Seven Situations that Change Your Brain, For Better or Worse
There are many ways to change your brain. Some you can control (like getting enough sleep and reading), and some you can't (like pain). Read more »
Link copied!
Interesting Articles
Culture
How Does Eye Contact Work?

There's a saying that states that “the eyes are the window to our souls.” Because through our eyes we can show others how we feel, both physically and emotionally. Furthermore, through your eyes,…