Santiago Ramón y Cajal is the father of neuroscience because his contributions were fundamental for the advancement of knowledge about the human brain, and neuroplasticity. Also about the structure of neurons, which he referred to as "the butterflies of the soul". 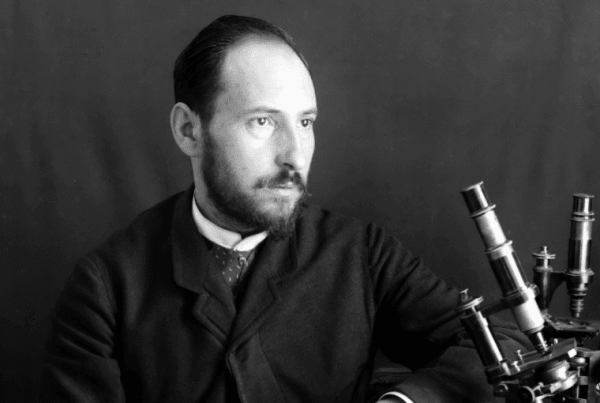 Santiago Ramón y Cajal is one of history’s prominent scientists; he’s up there with Galileo, Einstein, and many others. At least, according to Eduard Punset‘s description. He might be right though. This Spanish histologist laid the most important foundations of modern neuroscience. In fact, he presented opposing concepts to those that dominated science at that time. People found out later on that he was right.

He discovered the individuality of neurons and laid the foundations for what the world knows as neuroplasticity. Also, he introduced the world to glial cells. Ramón y Cajal was always a rebel, in the good sense of the word. He had no qualms about contradicting the established way of thinking. His mind was truly brilliant. This is because he had an extraordinary sense of curiosity, and was tireless and methodical. Precisely these qualities got him the Nobel Prize in Medicine.

Santiago was born in Petilla de Aragón in 1852. His father was a provincial doctor who wanted to instill a love of medicine in his son. It wasn’t that easy, though. This is because Santiago Ramón y Cajal was a restless child. He had more passion for making discoveries in real life than through books.

His two passions were nature and painting. Therefore, his family sent him to a boarding school to force him to study but it didn’t work. When he was a teenager, his father wanted to give him a lesson. Thus, he placed him as a barber’s and as a shoemaker’s apprentice. Historians say that he acquired many great skills in such trades. This is because he was innately good for any field he dedicated himself to.

Finally, he decided to study medicine at the University of Zaragoza, where his father had obtained a position as a professor of anatomical dissection. Classes with his father allowed him to develop his skills as a draftsman. In fact, he later applied them to his drawings of the human body.

After completing his medical degree, he was called up and sent to the Cuban war. There, he spent some months in rather precarious conditions and then became ill. On his return from Cuba, he received his doctorate in medicine from Complutense University of Madrid and acquired an interim assistant position in anatomy at the University of Zaragoza. Around the same time, one of his mentors, Maestre de San Juan, trained him in microscopic observation techniques.

His discovery of the microscope allowed him to develop another passion, and historians say it became like an extension of his body. He married and had seven children, although two died during childhood. After obtaining several important positions at the universities in Zaragoza and later in Valencia, he finally moved with his family to the University of Barcelona for a while in 1887. There, he was the chair of the department of histology and, in 1892, became the chair of pathological anatomy in Madrid.

One of his daughters contracted meningitis. Apparently, this affected him deeply and he sought refuge in his research. Thus, he was in his lab day and night. Ramón y Cajal made one of his most important discoveries the same day his daughter died. He would forever remember the intensity of conflicting feelings that he felt at that time.

He created his own staining methods for samples to study nerve cell connections. It was thanks to this methodology that he was able to demonstrate that neurons are independent cells. That they’re not physically connected to each other. The science at the time was based on the idea that nerve cells weren’t separate from each other and formed a tangled, compact mass.

Santiago Ramón y Cajal also studied the structure of the cerebellum in depth. In addition, he studied the spinal cord and medulla oblongata, along with various sensory centers such as smell or retina. After a trip to Berlin and the presentation of his advances in the knowledge of the structure of the nervous system and neurons at a congress, he was awarded the Nobel Prize in Medicine in 1906.

He didn’t stop working a single day of his life. Historians say that he was literally working in bed the day of his death, in 1934, in spite of being seriously ill. The contributions to neuroscience and the legacy of Santiago Ramón y Cajal were fundamental for the advancement of knowledge of the human brain, neuroplasticity, and the structure of neurons, which he called “the butterflies of the soul”.

Thanks to Neuroplasticity, We Never Stop Learning
Neuroplasticity is at its greatest during childhood, as the brain is more flexible and it constantly receives new stimuli. During this time, a large number Read more »
Link copied!
Interesting Articles
Biographies
Édith Piaf: The Little Sparrow of Paris