The Ensō Circle: A Zen Symbol of Enlightenment

Discover all about the ensō circle in this article! 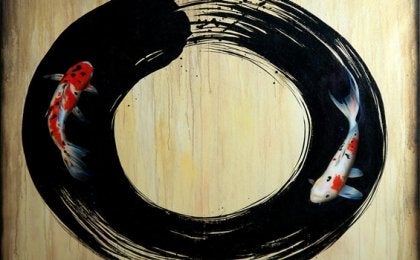 In Zen Buddhism, the ensō circle symbolizes simplicity and harmony. Only those who keep an open mind and enjoy internal balance are able to trace this perfect circle, which shall never be closed.

Buddhist teachers often say that it’s impossible to explain the ensō. Although the ensō isn’t a simple circle nor an art form, many people choose to get this minimalist Zen expression tattooed on their bodies.

Those who draw the ensō circle have the desire to express a complete and fulfilled personal state, where everything and nothing exists simultaneously in the present moment. The open space of the ensō represents being open to infinity.

The ensō circle and internal balance

Circles have always had a magical, symbolic, and spiritual transcendence. Carl Jung himself was fascinated by this shape, especially by the concept of mandalas.

In his spare time, or whenever he needed to distance himself from his problems, he used to draw circles. According to him, they symbolized the formation and transformation of one’s mind. According to the famous Swiss psychiatrist, through this shape, we find peace, as well as the drive to go further.

For Zen Buddhists, on the other hand, the ensō circle evokes that perfect moment in which the mind is free to leave the body. Therefore, only a mentally and spiritually fulfilled person will be able to draw a real ensō.

You could say that this drawing symbolizes the reflection of an individual’s illumination, the ability of an artist to evoke their inner perfection through a circle.

This symbol originated in China in 28th century B.C. In the famous Shin jin mei, an oriental poem that represents the essence of Zen Buddhism, the ensō is described as a vast space where there’s nothing lacking or left over. It also explains that the first ensō came to be when a monk asked his teacher to explain what enlightenment was in words. The teacher told him that he couldn’t describe it in words because it was pretty much impossible. Thus, he picked up a brush and rice paper and drew a circle.

Ensō and the universe

Circles represent different things for different cultures. This symbol evokes a perfect representation of the world, of movement, and of that epicenter where everything’s concentrated. It symbolizes the ouroboros, a snake that bites its own tail, creating the shape of a circle.

It represents the full moon and its contact with nature, which is capable of attracting the tides. It’s the empty cup of tea where you could read the future. Also, it’s even the Dharma Chakra, which contains Buddhist wisdom. The ensō circle is, in essence, the universe itself in motion.

How to draw the ensō

To draw the ensō, you must start from an idea: fukinsei, the negation of perfection. It’s simply a matter of capturing the present moment through mindfulness. You must free your mind of all thoughts and push all worries aside in order to experience your true self. Then, in a single brushstroke, draw the ensō circle.

There’s no such thing as the ‘perfect circle’. Remember that perfection isn’t what you’re looking for, which is why you shouldn’t think about your abilities, effort, or result. You have to go with the flow and let yourself go.

Zen art is an external expression of the internal state. Therefore, to draw or paint an authentic ensō, you must keep working at it until you find peace and balance. Only when you’re truly prepared will you be able to give shape to the ensō: that imperfect circle that perfectly represents the present moment.

“All that we are is the result of what we have thought. The mind is everything. What we think we become.”

Jung’s Spiritual Awakening
Carl Gustav Jung is maybe not as iconic as Sigmund Freud in the world of psychology but his spiritual awakening has left an important mark on an society Read more »
Link copied!
Interesting Articles
Culture
5 Interesting Ways To Enhance Your Memory

Memory is very interesting. The mechanisms that trigger memories or cause us to remember or learn things are unpredictable and sometimes can't be…

Sometimes, you have to analyze past mistakes in order to create a better tomorrow. Making a more concentrated effort to include women and girls in science is one key part…

Love always has a bit of magic to it, no matter when or where it happens. Your world changes. Love…

Culture
Parkinson's Law: Why Do We Waste So Much Time?

Cyril Northcote Parkinson was a historian that worked for many years in the British civil service. The experience he accumulated…