The Four Types of Buddhism

In this article, we explore the different schools, branches, or types of Buddhism. 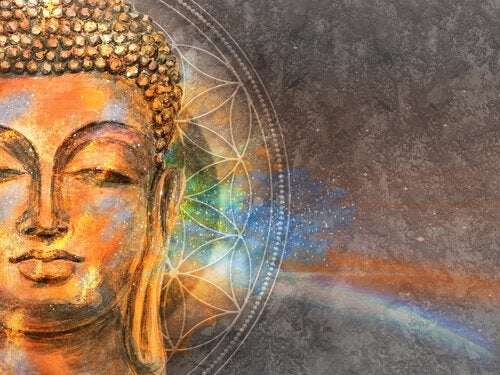 Buddhism isn’t organized according to hierarchies of power like in other religions. In other religions, the person who houses the wisdom of the sacred texts is at the top. However, we can find different schools, branches, or types of Buddhism where the classification is different.

Buddhism is both a religion (although it doesn’t fit completely into the formal definition of the term) and philosophical doctrine. 488 to 535 million people who call themselves Buddhists share its traditions, beliefs, and practices. Like many other traditions, the practice of some of its doctrines has become very popular in the Western world.

Buddhism originated in India between 6th and 4th century B.C. Today, it’s the fourth religion in the world with the most followers. Some believe that there are two main branches: Theravada (or The Way of the Elders) and Mahayana (or Great Vehicle). However, there are many differences between them.

In Buddhism, the Buddhist scriptures are the sacred texts and the object of study. It’s all about cultivating wisdom, practicing meditation, renouncing the material world, and favoring kindness and compassion, among other things. Of course, there are monastic variants of Buddhist practices. However, most people who practice this religion do it in a less intense way. Despite this, the philosophical principles of Buddhism don’t differ.

The understanding of Buddhism is holistic. In other words, the teachings of this practice are interrelated and are composed of each other. In turn, Buddhists emphasize that these teachings are only a guide to the Dharma. Although there is no single-word translation in Western languages, one of the common translations for Dharma in Sanskrit is “things the way they are”.

Branches or types of Buddhism

According to the classification criteria, we can find different ways of practicing Buddhism. The three main branches of Buddhism are Mahayana, Theravada, and Vajrayana.

It’s inaccurate to speak of ‘types of Buddhism’. Namely, because the variants coincide at some point in various aspects. For example, many agree on the historical starting point of the doctrine. Further on, the different teachings have many similarities and differences that make it difficult to classify them. With this in mind, it’s possible to organize the different beliefs in an artificial way according to similarities and differences.

While traditional Buddhism is a set of thousands of beliefs, traditions, and practices, there are modern interpretations of that system.

According to this classification, there are 19 kinds of Buddhism or 19 schools of Nikaya. Of these 19, only Theravada Buddhism has survived. This branch of Buddhism identifies the contents of the Pāli Canon, a set of sacred texts, as true sutras.

Introspection plays an important role in Theravada Buddhism. Individual experience and critical reasoning oppose blind faith, with the goal of liberation and attainment of Nirvana.

As we’ve already mentioned, this is one of the three major types of Buddhism. Unlike Theravada Buddhism, the teachings are more of a guide than a doctrine. The aim is to unravel the truth through criticism and reasoning, as well as question the theories of the past. We could compare it to the scientific method. It’s also different from Theravada Buddhism in its acceptance of other types of sutras.

Zen Buddhism is one of the types of the Mahayana branch. It seeks the experience of wisdom, distancing itself from theoretical and intellectual knowledge.

Also called ‘Esoteric Buddhism’, it developed in the Himalayas and is the main religion of Bhutan and Mongolia. It has four schools:

The different types of Buddhism have inspired many because they encourage us to look more inward and less outward.

How to Deal with Fear According to Buddhism
Dealing with fear involves handling love and attention problems. He who focuses on the present and fills himself with compassion is not likely to feel it. Read more »
Link copied!
Interesting Articles
Literature and Psychology
How to Write Like Stephen King

Culture
What is Utopia?

"Utopia" is a common word in our everyday life. It's a useful argument or counterargument when discussing ideal or hypothetical societies. However, it may have a much deeper meaning than…

The novel 1984, along with Animal Farm, are George Orwell's most famous works. This writer presents us with political literature containing highly interesting psychological nuances. Orwell is famous for his democratic socialist…