The Endless Trench can produce very different sensations from what it might have if we weren't currently forced to be confined. Surely, it's a lot more difficult to imagine how some people could endure being locked up in such unfortunate conditions at this time. 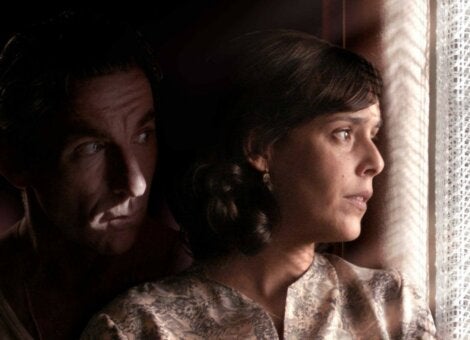 The Endless Trench is an overwhelming journey through the Spanish Civil War and the so-called moles. A handful of people across Spain surfaced right after the government amnesty in 1969. They had been hiding for over 30 years to avoid retaliation, often in their own homes, after Franco’s occupation in 1936.

The film offers details from some of the most amazing tales about this nightmare. It reformulates the hiding story of a so-called “mole” and his wife. She suffers due to her terrible situation in a deep, self-sacrificing manner. It’s a great story about love as protection against fear.

The film gets much of its impact through two characters and one location. The team of Basque directors and producers responsible for films such as Loreak and Handia are in charge of this. It’s an intense, almost perfect emotional journey about fear of political repression and about human vulnerability, despair, and resistance.

The Endless Trench – from flight to eternal waiting

Most of the action happens within the first 20 minutes of the film, as the camera follows the left-wing politician and the astute Higinio (Antonio de la Torre). The latter is then arrested along with other prisoners and taken away in a Civil Guard truck.

While one of the other people who got arrested begs one of the guards for his life, Higinio takes the opportunity to jump from the truck and escape. Then, the civil guards chase him as he runs through a rural area of ​​Andalusia.

Fortunately, he hides in a deep dark well throughout the night, along with two other people who are also hiding from the police, who later shoot them from above. In the meantime, Higinio manages to hide in one of the holes from the well. Then, pushing the two dead bodies aside, he leaves the next morning and heads home.

His wife Rosa, a seamstress played by Belén Cuesta, awaits him at home. From this point on, there’s a deeply psychological drama in the stillness and eternity of the hours. Higinio sees no other way than to hide under the floor and witness what goes on in his house, just like a mole. He’s a mere spectator in his own home and from a rather uncomfortable place.

“When I wrote about the Spanish Civil War many years later, I used documents that I picked up when I was a child, as a lot hadn’t been published (a lot more resources are available now).”

The Endless Trench – tension for the spectator

Even though the life of a mole was presumably boring, it never becomes so for the viewer of this movie. The main threat and tension in the film come from Gonzalo (Vicente Vergara), who betrayed Higinio to the authorities. He continues to threaten him at all times, starting with the sadistic removal of Rosa’s house curtains so he can see everything from where he’s hiding.

Taking advantage of an Easter week in town, Higinio moves into his father-in-law’s house — disguised as an older woman. There, he has a lot more space to fully establish himself as a mole running away from Franco’s police. He has a small bed, tiny bookshelves, and a small table where Rosa can work.

In a tragicomic sequence that offers a respite from the drama, a homosexual couple decides to use Higinio’s father-in-law’s house for their dates, taking advantage of Rosa’s absence for a few months. Upon being discovered by Higinio, they establish a pact in which they can use the house in exchange for bringing newspapers and some food.

Rosa declares she wants a child, a demand that’s hard to believe under the circumstances. Rosa is a firm, devoted, and selfless wife. In fact, her role is complex and there are several layers to her. She’s a lot more than the wife who aids Higinio in his hiding place.

Suddenly having to improve everything her education prepared her for, Rosa must reinvent herself as the main breadwinner. Belén Cuesta does a great job transmitting Rosa’s fragility, strength, and commitment as the years go by.

If there’s a turning point in Rosa’s life, it’s the sexual harassment and subsequent rape she suffers from a civil guard. He’s her customer at the workshop. One day, there’s a struggle in which Rosa refuses to establish any sort of contact with him. All while Higinio, who sees everything from his hiding place, has to contain himself so as not to be discovered.

Higinio is overwhelmingly frustrated as the humiliation builds up and reacts rather primitively to what happened. He comes out of his hiding place to have sex with his wife in a rather uncomfortable scene that borders on rape.

When the civil guard returns a few days later, he attacks Rosa and Higinio can’t stop him. This is because doing so would tip over the lamp and burn his hiding spot. When he finally comes out to help, it’s only to kill the civil guard. Unfortunately for Higinio, he’ll always wonder whether the biological father of his child was him or not.

The Endless Trench and the power of love

The performances of both protagonists add a touch of reality to the story. Higinio’s quietness and traditional values add a lot of meaning to his role.

Inevitably, most of the action takes place in dim light, often used in contrast to the dazzling Andalusian sun. Much of it takes place through uncertain visions from Higinio’s fearful perspective. Along with the viewer, he tries to discover what in the world is going on. This strategy generates tension, but also emotion.

Despite the suffering, darkness, and human evil the film reflects, The Endless Trench is a positive movie. It tells, without sentimentality, excess or clichés, that love can be a refuge that’ll stand for a lifetime.

The overall process of the film begins with what’s barely visible towards what’s right to see. In all purity, it’s everything that’s hiding from plain sight.

7 Common Types of Violence That We Face
Violence is one of those epidemics that doesn't respect limits or borders. Unfortunately, there are many types of violence, and you can find it everywhere. Read more »
Link copied!
Interesting Articles
Cinema, Television, and Psychology
Timeless: Wanting to Change the Past