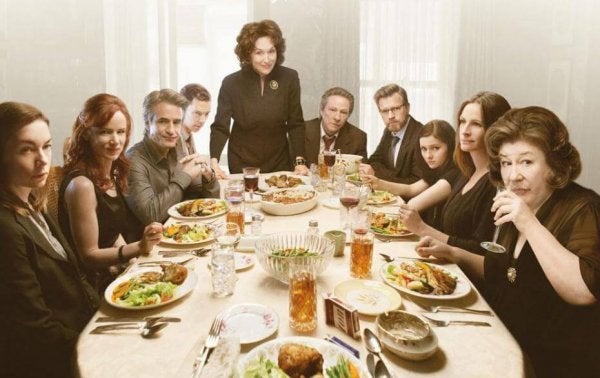 Our families are the starting points that, in many cases, influence us beyond our childhood. In this sense, the film August: Osage County captures a family that’s far from idyllic.

This family seems perfect from the outside, but only those on the inside know what really happens. The characters feel trapped between their love and the bleak panorama of an environment full of frustration, envy, and competitiveness instead of love and protection.

After the family’s patriarch commits suicide, his wife calls their three daughters to go back home and attend the funeral. For each of the daughters, this return stirs up the conflicts and resentments of their past.

Their father had been a refugee for years and their mother is addicted to drugs. Their marriage was very destructive. All their father did was satisfy her demands and complaints. Their mother believed he didn’t treat her fairly. She punished her husband because he cheated on her many years ago. This infidelity produced a child. This is the family secret.

Both parents came from poverty and suffered parental mistreatment. They’re rough people used to life’s hardships. Both are proud to have triumphed due to their hard work.

However, they projected their own desires onto their daughters, but none of them seems to have fulfilled these expectations. The matriarch feels deep contempt toward her three daughters and always questions their life choices.

The matriarch in August: Osage County is narcissistic. She has a passive-aggressive personality. She focuses only on her daughters’ mistakes. In addition, she reproaches them for having opportunities she never had. The matriarch is manipulative and excessively dramatic when her tricks don’t work out the way she wants them to.

The matriarch feels she has to compete with everyone. She uses any information she gets from her daughters as weapons against them. She always says positive comments sandwiched between negative ones.

The matriarch is a twisted woman who feels attacked because her daughters have their own lives. She does whatever it takes to get them to come back home and to remind them of “their obligations to their mother”. She always reminds them that she didn’t have anything and makes them feel bad for having too much.

The oldest daughter has always been the mediator during family crises, both with her younger sisters and with her own parents. She’s controlling and this caused a lot of problems with her own husband, who divorced her. However, the whole family doesn’t know that she’s divorced.

Despite the love that her husband and daughter feel for her, they find the fact that she can never relax insufferable. She feels an internal struggle and doesn’t want to repeat her parents’ mistakes.

The middle sister in this movie is the parents’ caregiver. She never married nor did much with her life except take care of her parents. This made her build up a lot of bitterness toward them and her sisters. She has a very strange relationship with a half-cousin that nobody knows about.

The matriarch feels grateful for the fact that she’s the caregiver. However, she constantly attacks her. In addition, she reproaches her for not having raised her own family due to her unfeminine appearance. She even makes fun of her. This daughter has serious problems relating to others and seems to have developed an avoidant personality.

In August: Osage County, the youngest daughter seems totally lost. She’s a very childish and fragile woman who only wants to please everyone and be accepted. She’s spent her entire adult life jumping from one relationship to the next, taking risks with men who don’t treat her well.

The youngest daughter is a very emotionally dependent person. She goes to great lengths to show her mother how “happy” she is and how perfect and idyllic her current relationship is. However, the other family members see her partners as “this year’s boyfriend”. It’s difficult to say based on the information provided in the movie, but she could be emotionally stunted.

The three daughters have grown up in an authoritarian environment. Their parents have never shown any kind of affection toward them. They’ve also exercised rigid control over their lives. There’s a disorganized attachment in all of them, although each of them has dealt with this in different ways.

Even so, when there are family crises, they resort to denial. This makes it easy for them to maintain a false family environment. Each one of them has developed different defense mechanisms to survive. In short, it seems like a “normal” family environment to outsiders, but it’s actually really dysfunctional.

Although August: Osage County is just a movie, it shows us how our families can cause a lot of psychological damage.

A few months ago, the Provincial Hospital of Castellón analyzed the film in one of its meta-training seminars. They delved into each of the issues from a therapeutic perspective. Many people can relate to these family roles. They should be studied more in depth for the psychological well-being of those who suffer in these environments, as well as for those who surround them in adulthood.

How Can a Child Survive in a Dysfunctional Family?
Growing up in a dysfunctional family can mean great emotional damage for our children. Read on and find out what can happen and how to solve it. Read more »
Link copied!
Interesting Articles
Family
My Grandma with Alzheimer's Had a Lot of Fun