The Definition of Strength According to Fromm: The Road to Fullness

To be strong is to have courage to live. Erich Fromm taught us that there's no greater aspiration than to reach the fullness that will help us have the faith to challenge fear and the courage to build a more humane and altruistic society. 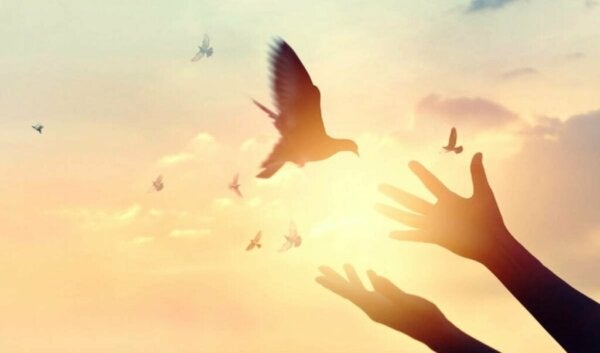 The definition of strength, according to Erich Fromm, is an exercise of inner reflection that we should all carry out. In a complex world, which tends to self-destruction, moving towards a purely technological society that he had already anticipated, our only hope is to truly develop as human beings.

That development implies reaching plenitude in terms of responsibility, freedom, and self-knowledge.

A pioneer of what he called the psychoanalysis of radical humanism, Fromm was a philosopher and social psychologist who we’d do well to consult periodically.

Not only is he still one of the most enlightened minds of our era. He also continues to lead that intellectual struggle that seeks to shape a type of altruistic society oriented towards more solidary values.

This psychoanalyst of German Jewish origin went beyond Freudian theories and opted for a broader, sensitive, and also critical perspective to analyze the general state of humanity and its problems. He didn’t create any kind of therapy to treat people’s pain and suffering, as Viktor Frankl would do, for example.

However, Fromm was, is, and will always be that voice of conscience that encourages us to value the situation we find ourselves in, and, in turn, what we should aspire to. His ideas about human strength are very interesting. We’ll analyze them below.

“Total humanization requires the advancement of our strength and development to move from selfishness to solidarity and altruism.”

The definition of strength according to Erich Fromm: what is it?

The definition of strength according to Erich Fromm appears in several of his most remarkable works. One of them, the most interesting one, was The Revolution of Hope. In this book, he spoke about the need to become activists of humanity, people capable of claiming values that challenge the risks of the society of the technological era.

To understand this perspective, we must put things in context. Erich Fromm was forced to flee Germany in 1934 after the Nazi party took power. Much of his perspective is rooted in the horror and pointlessness of World War II.

Later, he emigrated to the United States, where he led multiple peace movements, rose up against the Vietnam War, and declared himself an idealist of a radical and humanist form of socialism.

For much of his life, he was disappointed in the kind of society he had lived in, first in Germany in the 1930s, and later in the United States during the Nixon era.

Thus, in his book, The Revolution of Hope, he urges people towards an individual transformation that would create a paradigm shift in our technological societies. One of those changes was based on the need to learn to be strong.

Erich Fromm’s definition of strength urges us to do two things. Firstly, to commit ourselves to hope and faith. Secondly, to know how to react to violence, submission, meaninglessness, and selfishness. From all of this comes the need to learn to be responsible, both for ourselves and in our commitment to society.

However, it’s also interesting to note that Fromm distinguishes three types of strengths. Two of them aren’t useful to us, as they don’t help us to progress or achieve happiness. They’re the following:

Finally, we find the central idea in Fromm’s theory about the type of strength that we should aspire to. It’s a state of fearlessness in which we can develop and transform our society using optimism, faith, and hope.

“The aim of life is to grow optimally and fulfill one’s potential. If a person has the will and determination to let go of the bars of the prison of narcissism and selfishness, and when they have the courage to tolerate intermittent anxiety, then they’ll experience the first glimmers of joy and strength.”

The definition of strength according to Erich Fromm is very reminiscent of the one offered by Spinoza. According to this Dutch philosopher of Sephardic origin, being strong has little to do with physical endurance or even courage. Strength is a virtue that’s related to firmness and generosity.

To be bold implies dispensing with idols, chains, and irrational thoughts in order to fight for authentic values with which we can create a more just, altruistic, and supportive society.

You’ll Eventually Discover Your Strengths
Somehow, a part of oneself always comes out in difficult moments. It's precisely at this stage that you discover your strengths. Read more »
Link copied!
Interesting Articles
Philosophy and Psychology
Bertrand Russell: Five Phrases to Think About