Viktor Frankl's teachings on resilience show us the need to change when we can't change the circumstances around us. The founder of speech therapy is an example of how resilience can give us purpose and strength to better navigate through adversity. 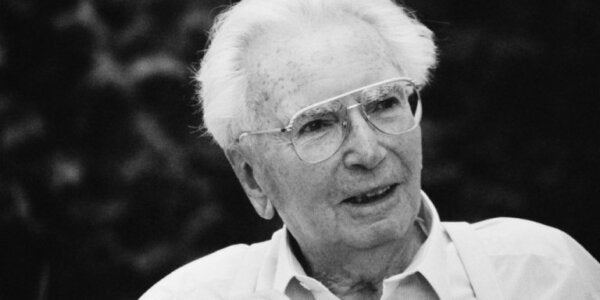 These days, Viktor Frankl’s teachings on resilience are more necessary than ever. The famous psychiatrist explained that, while he was in the concentration camps, he had to make a real mental effort. He visualized himself in the not too distant future giving a lecture in front of a large audience explaining how to deal with the traumas of war.

That strategy worked well for Frankl. It allowed him to find an inner refuge in which he kept his hopes, dreams, and psychological strength. He put this goal on his horizon and made it an anchor to hold on to.

He tried to make sense of the unexplainable. His desire was that the horror and suffering he experienced would have real meaning for life and would be able to teach others how to cope with emotional pain.

His lessons and his psychological therapy have never gone out of style. Thus, even though Viktor Frankl didn’t actually mention the word resilience as such (although he did mention resistance) we can still use his lessons as a foundation to understand the whole concept better. Let’s take a deeper look at this.

“The point is not what we expect from life, but rather what life expects from us.”

Viktor Frankl’s teachings on resilience, a legacy to reflect on

The concept of resilience has its origins in the world of physics and engineering. It’s the property that certain materials have when it comes to returning to their original state after having received some sort of impact (the elasticity of a rubber band, for example). The field of psychology then picked up on this term to apply it to its field of study from the 1940s onwards.

Norman Garmezy, now Professor Emeritus at the University of Minnesota, Minneapolis, was one of the first people to use this metaphor, which was taken from a real physical phenomenon.

In his research into the world of schizophrenia, he discovered something remarkable. The children of patients who suffered from this condition didn’t usually inherit this illness. In fact, they tended to have very resilient, competent, and overcoming personalities.

The experiences lived out in their homes enabled them to form what Garmezy defined as “resilient personalities”. On a similar theme, and about the same time, Maurice Vanderpol, former president of the Boston Psychoanalytic Society and Institute, also saw that a good many of the survivors of the German concentration camps had this same characteristic. Viktor Frankl was, in fact, one such example.

The type of therapy that Frankl devised and applied to his patients had this purpose. It helped people create new meaning in their lives, and to create a more resilient personality. They would then be able to use this resilience to find real purpose and move forward in their lives. This would be the key to it all.

“Decisions, not conditions, determine what a man is.”

It’s always a good time to return to Viktor Frankl and his teachings on resilience. When you read his books and lectures, you’ll discover that the most decisive thing you can do is to accept the reality that you have to live in. In most cases, you can’t control the things that happen to you. Adversity often has a chaotic component that can often be too much for you to cope with.

In that context, the only thing you can do is accept reality. There’s little point in becoming obsessed with why it happened. You must focus on the how and what. How can I face this challenge? What’s its purpose? What can I learn from this experience? How can I react?

“The meaning of my life is to help others find meaning in theirs.”

Find your own meanings

In the midst of this environment of permanent anguish, constantly surrounded by meaninglessness and horror, he decided to look for some sort of survival mechanism.

He wanted to find meaning in everything he saw, felt, and suffered. He told himself that he could learn something each day, and then, the next day, he could use those things to help others to overcome the trauma. That was his purpose and what helped him survive.

Thus, in the midst of all the difficulties you may face, that can be your strategy as well. Clarify what your purposes are and fight for them. Then, as Frankl himself explained, “Once an individual’s search for meaning is successful, it not only renders him happy but also gives him the capability to cope with suffering”.

Your attitude to life and to your own difficulties is, according to Frankl, what determines your ability to cope with almost anything. Moreover, it’s up to you to choose the right attitude and not give up. It’s up to you to keep hoping and believing that your past doesn’t have to determine your future.

This very attitude, and the ability to transform yourself and deal with adversity, are part of the legacy that Viktor Frankl left us in his teachings on resilience. As he explained, it isn’t the context or circumstances that determine how you’ll cope, but rather your decisions and thoughts.

Make sure you’re conscious of them. Keep these ideas in mind and try, as far as possible, to apply these lessons from the founder of speech therapy to your life.

“Our greatest freedom is the freedom to choose our attitude.”

Anne Frank: A Story of True Resilience
Anne Frank made her diary, now translated into 70 languages, a vehicle for reflection and reaffirmation, in the midst of extremely difficult conditions. Read more »
Link copied!
Interesting Articles
Stories and Reflections
From Being Too Kind to Being Controlling