Humanity, according to Erich Fromm, need bigger doses of humility and love. In a shallow society like our own, selfishness is the enemy to beat to gain happiness, harmony, and respect. 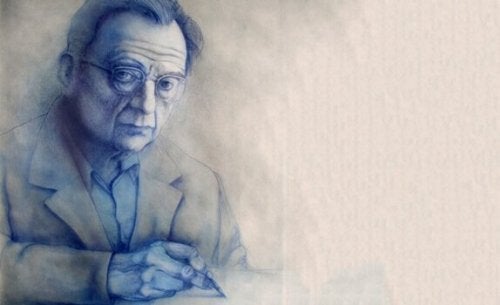 According to Erich Fromm, the human condition needs a change. Most noteworthy, Erich Fromm challenged Sigmund Freud. Reformulating the concept of freedom, Fromm worked hard on proving something that can be seen in societies nowadays: humanity is losing its happiness.

In his book To Have or To Be?, Erich Fromm shared many timeless and transformative ideas. He realized something interesting. That people assume that those who don’t have, don’t exist. The human condition should always be above such earthly ideas. The way to enrich your life and fulfill yourself as a person is about becoming human.

It’s been over 30 years since the world lost Erich Fromm. However, his thoughts, ideas, and legacy live on. Humanity needs a change. Humanity needs to be able to work on real freedom, where people stop comparing themselves depending on their material possessions and start appreciating who they are.

“The main condition for the achievement of love is the overcoming of one’s narcissism. The narcissistic orientation is one in which one experiences as real only that which exists within oneself, while the phenomena in the outside world have no reality in themselves, but are experienced only from the viewpoint of their being useful or dangerous to one.”

What human condition needs, according to Erich Fromm

According to Erich Fromm, the human condition needs several things. To understand his approach and perspective, you need to remember that his philosophy centered in an almost radical humanism. What does this mean? That this psychologist was trying to give people their freedom back.

Everybody has burdens. The current industrial, societal, and political structure puts people into prisons of their own. This makes it difficult to come out of their shells. They lose their ability to choose, to think. Some lose their free will.

You can limit your happiness in many ways. You do it when you choose conflict and violence over peace. Letting your instincts rule over emotions and reason. Most importantly, when you deny yourself the love you deserve.

Let’s see why the human condition needs to invest in its wellness and freedom.

In Escape from Freedom (1941), Fromm called upon something interesting and inspiring. According to him, people give too much importance to rational thinking. However, human beings are a perfect combination of emotion and reason, between feelings and self-control.

As such, when it comes to expressing your true personality, you need to be more spontaneous. This is how you break free. Let your essence run wild to free yourself from the conventions of society.

“Creativity requires the courage to let go of certainties.”

In his book To Have or To Be?, Fromm shared some ideas that, according to him, are key to keeping humanity afloat. He not only had to experience World War II, but he also witnessed the Cold War and the arms race that gave the world so much anxiety. Current times are different, but the essence remains the same. His suggestions in To Have or To Be? are still as valid as they are inspirational.

What the human condition needs, according to Erich Fromm, is to overcome one’s narcissism. This is a recurrent theme throughout his work. It’s such that he coined a new term that’s worth remembering: malignant narcissism. For him, that constant pursuit of self-gratification, ego-stroking, is the root of all evil.

Humans need to cherish humbleness, mutual respect, and themselves, but in a more healthy, affectionate, and harmonious way. Narcissism is the worst of all evils, something you need to avoid at all costs. You don’t need to preserve ignorance and compliance.

In short, Erich Fromm’s work is still relevant and valid. Going back to them is an invitation to reflect on life and all the things humanity needs to work on.

Jean-Martin Charcot, The Forefather of Psychoanalysis
Sigmund Freud might be the "father of psychology", but Jean-Martin Charcot is the forefather. Learn about what his experiences contributed. Read more »
Link copied!
Interesting Articles
Philosophy and Psychology
Carl Jung's Collective Unconscious

Philosophy and Psychology
Sartrean Existentialism: Who We Really Are