The Aladdin Factor and Assertiveness

Do you know what the so-called Aladdin factor is? Do you know how much it influences you and how you can use it to your advantage? In this article, we'll tell you all about it. 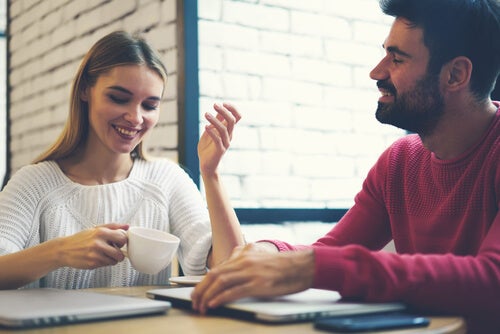 Studies have shown that people aren’t very confident that there’s a willingness in others to complete the questionnaires they’re given, donate to charities, or simply listen to what we have to say.

New research shows that we underestimate ourselves and fear the worst when it comes to asking people for a favor. Recently, Vanessa Bohns presented a summary of her research on this topic and painted a more hopeful picture of our ability to influence others than we usually do.

Let’s say you needed to borrow someone’s cell phone to make an urgent call. You need a story to justify it? Well, you spent the entire bus ride listening to old episodes of your favorite YouTuber podcast. The battery died without you realizing it, and you need to call a friend to ask them to pick you up. Is the Aladdin factor going to work in your favor? Well, according to this theory, all you have to do is ask.

How many people do you think you’d have to ask before someone lends you their phone to make a call?

In one particular study, researchers asked people a similar question. However, participants first had to guess how many people they would have to approach before three would agree to lend them their phones. On average, participants said that they’d probably have to ask ten people.

At this point, the participants went out and tried to get three people to lend them their phones for a call, in order to see how accurate they were in their estimations.

Interestingly, on average, they only needed to ask about six people in order to get three people to lend them their cell phones. In other words, people underestimated how willing other people would be to help them.

The Aladdin Factor: what if you ask an embarrassing favor?

Okay, so people are more willing to lend us their phones than we would have expected, but how far does people’s kindness go? What if we had to ask people to do something ethically questionable?

In another study, Bohns and his colleagues considered something far more serious: defacing a library book.

The participants in this study find out that their job was to get someone to write the word “pickle” in a library book. Ridiculous? Unexplainable? Yes, all of those and more! Their strategy would be to say they were playing a joke on someone but they needed the word to be written in someone’s writing that wasn’t their own.

So, then they went out and tried to get people to write in the book. They were met with reactions such as “You want me to deface this book? Are you sure? It looks like a good book!”

In contrast to their expectations, they only had to ask an average of five different people to get three to deface the book.

Why are we so wrong about the power of asking favors?

Well, we’ve seen that we usually underestimate the chances of a person helping us. But why are our predictions so wide off the mark? At least part of the problem is that we forget how uncomfortable it can be to say “no” to someone.

If you were approached and asked to sign a petition to promote environmentalism, you might feel uncomfortable saying no. You may feel that you’re offending the other person, implicitly telling them that you don’t agree with their values.

As Bohns says, “many people agree to do things, even things they would rather not do, simply to avoid the considerable discomfort of saying no“.

However, despite the fact that this is the case, we tend not to think about it. In fact, the less we consider how uncomfortable it is to say “no” to someone, the more we err in our estimates.

Don’t let them guess your wishes – formulate them

This research (and a subsequent book with the same name) seems to show that, if you want your wishes to be granted, just go for it. These are anecdotal examples but, in real life, our goals are different, and we’ll always meet multiple negative responses along the way. Expecting this is simply part of life. In the case of commercials and their sales goals, it’s clear that they always expect people to say “no”.

But beyond these cases of refusal, there are always those who find it really difficult to give a resounding “no” without letting the other person explain what they need.

This communicative capacity doesn’t only allow us to understand what really interests us in life, but also to put our assertiveness into practice. In this sense, we have to ensure that “the genie of the lamp” doesn’t have to ask us so many questions in order for our wishes to be fulfilled.

Three Techniques for Practicing Assertiveness
Practicing assertiveness isn't always easy, but if you want to improve your relationships and even interactions with strangers, it's an important skill! Read more »
Link copied!
Interesting Articles
Social Psychology
6 Steps To Help You Resolve Conflicts