Why Do Some People Find it Hard to Ask for Help?

Humans are social creatures. Consequently, one of the greatest advantages we have is that we can help one another. However, some people aren't capable of asking for help. Today, we'll talk about the root causes of this issue and what you can do if you fall into this category. 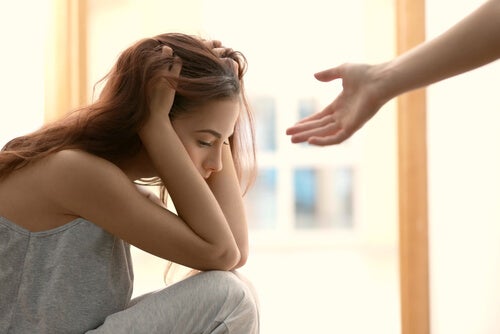 Everyone goes through tough times. However, some people find it very hard to ask for help. The root causes of this varies but the consequences are the same. Without assistance, you get stuck and can’t move forward.

Some people have a hard time asking for help because, to them, it shows weakness. Others lack the necessary social skills to do so or don’t know who to turn to.

Thus, they end up facing their problems alone. Some people even prefer to fail. Here are some of the reasons why a person could have a hard time asking for help:

False beliefs make it hard to ask for help

Many people believe that it’s wrong to waste another person’s time by asking them for assistance or asking them to listen. On the other hand, they may believe that other people have much better things to do than deal with their problem.

This belief is very popular and makes people distance themselves from others and avoid seeking assistance.

The “assertive bill of rights” includes the right to ask for help, as long as you’re aware that other people have the right to do so or not.

Being assertive is nothing more than defending your own needs and communicating what you believe, think, or need in a clear and open way.

People with low self-esteem are often very hard on themselves. Thus, they interpret the need to ask for help as confirmation of their inferiority or weakness.

Another reason is that some people believe that they shouldn’t have to ask for assistance. Rather, they believe that if they’re having a hard time, it’s other people’s responsibility to offer to help.

Pride is one of the main reasons why people find it hard to ask for assistance Doing things by yourself is very satisfying. Overcoming obstacles on your own is validating but it’s also a double-edged sword.

On one hand, pride makes it easy to blame other people for their lack of assistance, especially if you fail at your task. If pride is your motive, then overcoming the obstacle is more about showing off your abilities to others than the personal satisfaction from having accomplished something difficult.

Sometimes, people have a hard time asking for help because they’ve been burned in the past. If you’ve asked for help before and been rejected, you’re less likely to try again in the future.

Another reason why people don’t ask for assistance is fear of rejection. They’re scared that other people won’t want to or won’t be able to give them a hand.

Thus, you aren’t denying yourself the right to ask for help but the right of other people to say no. If this is your case, it’s hard for you to understand that right and you’re insecure about getting a negative response.

If you identify with what we described in this article, these tips on how to ask for assistance could help you:

If you find it hard to ask for help, you’ll end up feeling quite alone. You’ll distance yourself from other people, which makes it hard to get to know them and leads to a lot of frustration.

To remedy that, try to internalize the idea that you have a right to ask for assistance. Remember that helping other people isn’t always a burden. On the contrary, helping others boosts your well-being.

Asking for Help is an Act of Bravery
Why is it sometimes so difficult to ask for help? For many people, asking for help is like embarking on an epic journey full of implications.  Read more »
Link copied!
Interesting Articles
Human Relationships
The Unconscious Narcissism in Relationships Between Parents and Children

Often, those who've been in a harmful and destructive relationship repeat the pattern with their new partners. It can be…