Thanks for Everything Dad! 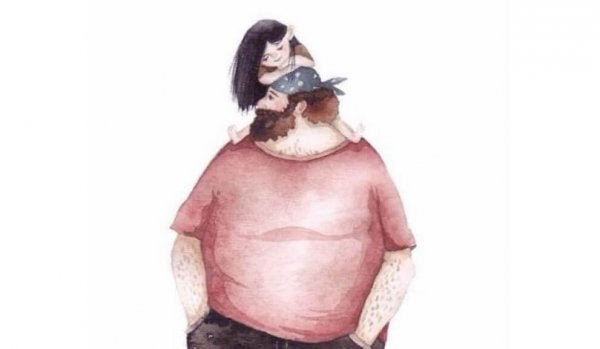 Dad. What a beautiful word. They are the ones who wait nervously in the hospital, who take your hand during childbirth and, when they hear their baby’s first cry, are filled with strength and vulnerability at the same time. Society turned them into the great absentees: the men were the ones who worked, the women took care of the home and the children.

He was the one in charge of both the punishments and the prizes. Many generations have grown up this way. Strict fathers, conscious of their responsibilities, watching over their children from a distance. Storytellers, inventors of stories, protectors and the keepers of dreams.

They seldom received gratitude for their efforts because everything they did was expected of them, and they weren’t very good and expressing emotions anyway. They wanted to say so much, but kept the words to themselves, fearful that it wasn’t their position to do so. But, for most kids, Dad has been their first hero. The first one they truly admired, and the last one they would continue admiring as they entered their adult years, and realized just how much effort he had put into keeping them safe.

A Dad is, quite simply, priceless. Often silent, other times silenced. And so, using the illustrations of the artist Snezhana Snoosh, we are going to pay a small homage to all the fathers of the world who truly deserve that title. This is an artist who knows perfectly the union between fathers and their children, and, as it is so difficult to describe in words, she has chosen to do so with images. She has created a series of watercolors that reflect the moments and the feelings that she shared with her father.

“When I get it wrong, you help me; when I doubt, you guide me; and whenever I call you, you are at my side. Thank you Dad!”

A father is always there to chase away the nightmares. As a great storyteller, he can turn those bad dreams around and change that monster into a dark, harmless shadow. His strength and courage are a wonderful example of how to face each and every threat, and whenever those threats overcome their children, he is there with his arms wide open to comfort them.

Hairdressing is not his thing. They are a disaster when it comes to making pigtails, and experts in making a mess of any hairstyle. And yet they are their children’s greatest admirer, the ones that see in their kids a strength that can conquer the world. Sometimes though they feel such sadness and helpless that their children can’t see that strength, and they would love to lend them their very own eyes so they may see it. They are the ones that simply marvel at the little angel in front of them. A Dad is the one on whose shoulders the world seems a more wonderful and fun place to be. On his shoulders Santa Claus seems even closer, and their walk is in step with the world itself. The truth be told, they are the ones who have as much fun as the kids whenever they can, and they love showing their children the world from their shoulders.

“I have childhood memories in which I saw you as a giant, and now, as an adult, you are even bigger in my life”

He may have the busiest schedule of all, but what he most wants to do is play with his children. It may only be a few times a day that he can afford himself the luxury, but when he does, he lives it to the fullest. At those times he can be himself with total freedom, and be as crazy as he likes, just so that he can see the happiness on his child’s face. The happiness that fills him more than hundreds upon hundreds of achievements at work could ever do.

He is the best playmate that a child could ever imagine, because nobody could ever, ever give him as much attention as he does. He is able to create a whole new reality for his child from the passion that fills his heart

He may be as stiff as an old oak tree, or have as much co-ordination as a dizzy duck, but when he’s with his children he’s game for anything. As soon as he enters the toy room, he leaves his common sense at the door.

A good Dad is a gift that you’ll never be able to stop giving thanks for. A good father is someone who gives everything and the only thing he asks for in return is that we enjoy life and that we face life with everything we have inside us. His efforts, so often from a distance, a distance far greater than we all would like, are so often not really recognized until the years pass by and suddenly we have grown up.

They aren’t perfect, they are but flesh and blood. Most of them are pretty stubborn, and it’s not easy to change their minds. Deep down, whether we follow their advice or not, they never want us to fail. Unlike many people, they are not the first ones to say “I told you so”. On the contrary, they are the first ones there to pick us up, simply because they can see in us what no one else can.

They may not often tell us they are proud of us, in fact we are often the last ones they will tell. However this obstacle doesn’t ever stop them from being proud of every step we make, and from enjoying our successes like no one else could ever do.

Link copied!
Interesting Articles
Wellness
May Our Wrinkles Be from Laughter

They say that wrinkles remind us of our smiles. Therefore, each fold of our skin is a reflection of an unexpected…

Most Baruch Spinoza quotes are both simple and deep at the same time. Many philosophers, such as Hegel and Schelling,…

Living with a broken heart is like walking around naked, with a half empty soul - tied down by a…

Starting a relationship involves adrenaline, emotions are skin-deep and we love everything about the other person. But time passes and…

Emotions
7 Steps to Emotional Balance and Dealing with Difficult Emotions

Wellness
There's No Such Thing As A Perfect Mother, But There Are Millions of Ways to Be a Good Mother

"Sometimes it's very hard being a mother. Yes, it's worth it. Yes, it is one of the most powerful experiences that a…