It's estimated that 3-5% of women experience premenstrual symptoms that prevent them from leading a normal life. In this article, we'll talk about this problem in more detail. 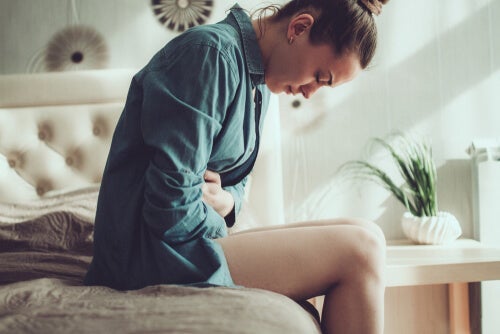 Premenstrual dysphoric disorder (PMDD) is a serious, and sometimes disabling, form of PMS. Silvia Gaviria provides us with one of the aptest definitions of premenstrual dysphoric disorder. She describes it as a set of emotional, behavioral, and somatic symptoms that appear at the end of the luteal phase, disappearing again two to three days after menstruation begins.

Both PMS and PMDD can cause physical and emotional symptoms. However, in the case of PMDD, the person may experience extreme mood swings that disrupt their work and damage their relationships.

In both PMS and PMDD, symptoms generally begin seven to ten days before menstruation begins, and continue throughout the first few days of menstruation. In terms of physical symptoms, the person may experience breast swelling and tenderness, fatigue, and changes in sleeping and eating habits.

Premenstrual dysphoria is a severe form of premenstrual syndrome that affects approximately 5% of women of childbearing age. Many patients report experiencing symptoms of PMDD from as early as their first menstrual period. It tends to become more common as women reach their thirties and forties, and usually continues until menopause. In a small number of cases, symptoms can also spontaneously disappear.

Symptoms often appear or worsen after childbirth, with age, after starting or stopping oral contraceptives, and after undergoing tubal ligation.

Among the many clinical variables associated with premenstrual dysphoric disorder are a history of major depressive disorder and postpartum depression, both of which also tend to occur more frequently in those who’ve been diagnosed with PMDD.

Premenstrual dysphoric disorder is caused by a number of closely related genetic, neurobiological, and endocrine factors. Most researchers believe that it may be an abnormal reaction to hormonal changes linked to the menstrual cycle.

Symptoms of premenstrual dysphoric disorder, according to the DSM and ICD

In manuals such as the ICD-10, PMDD isn’t considered a disorder at all, differing in both its interpretation and definition of the condition. However, in the new DSM-5, premenstrual dysphoric disorder is classified as a type of depressive disorder.

To ensure an accurate diagnosis, the doctor must take a medical history and carry out a physical examination. The patient should keep a calendar or diary of their symptoms to help their doctor diagnose PMDD.

You must have five or more symptoms of PMDD, including one mood-related symptom, in order to be diagnosed.

B. One (or more) of the following symptoms must be present:

C. One (or more) of the following symptoms must be present to reach a total of five symptoms when combined with symptoms from Criterion B above.

Note: the symptoms listed in Criteria A-C must have been met in the majority of menstrual cycles that occurred in the preceding year.

D.  The symptoms are associated with clinically significant distress or interference with work, school, usual social activities, or relationships with others.

F. Criterion A should be confirmed by prospective daily ratings during at least two symptomatic cycles. (note: The diagnosis may be made provisionally before this confirmation.)

G. The symptoms are not attributable to the physiologic effects of a substance (e.g., a drug of abuse, a medication, other treatment) or another medical condition (e.g., hyperthyroidism).

The DSM-5 diagnostic criteria have sparked great criticism, due to concerns of over-pathologization. Premenstrual dysphoric disorder is at the center of this debate. The DSM-5 classifies PMDD and the symptoms experienced in the days before menstruation as a depressive disorder.

However, many experts have questioned whether it’s appropriate to label half the population with a mental disorder once a month. This is the question at the heart of the debate. Is it really possible to pathologize a natural process based on the symptoms it causes in a small proportion of women for a few days each month?

Mood Disorders – Beyond Depression
Although most of us think of depression, the truth is there are many mood disorders. So, in this article, we'll try to deepen on some that we often forget. Read more »
Link copied!
Interesting Articles
Clinical Psychology
The Most Frequent Behavioral Addictions

Chronic stress and depression are related. A hormone links the two. It's a small peptide that causes a whole series…