Lack of Sleep and its Consequences

Lack of sleep is tied to cognitive, emotional, and physical problems. Thus, sleeping as much as you need should be a priority for the sake of your well-being. 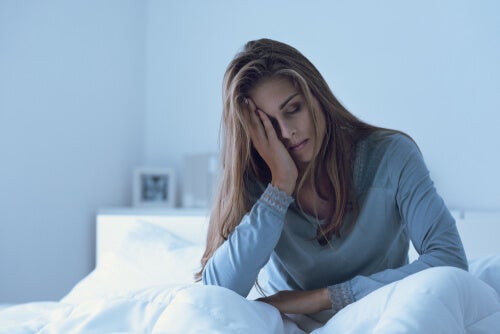 Lack of sleep is common in teenagers and adults. In a world saturated by instant gratification, overstimulation, and lack of patience, basic needs such as sleeping are often left on a second plane.

Likewise, the constant changes in working hours and the various artificial lights and technologies everywhere accentuate it.

The consequences of these changes manifest on different levels, such as cognitive, emotional, and biological. Nowadays, it’s at the point of generating new conditions such as insufficient sleep syndrome. Everything is a priority in this society, but sleeping isn’t one of them.

“…sleep deprivation is an illegal torture method outlawed by the Geneva Convention and international courts, but most of us do it to ourselves.”

Sleeping is an essential physiological state. It implies a decrease in alertness and awareness in order to develop processes of integration of brain activity and modify physiological processes. In addition, the circadian rhythm is what helps you alternate between your waking and sleeping states.

It’s also important to know that there are two major sleeping phases that should always take place in the same order.

Here, the muscle tone decreases and the respiratory and cardiac rhythm become irregular. This is the moment during sleep where the brain is most active and lucid dreams occur with a conductive thread.

Brain activation and lack of sleep

Via cerebral imaging, a global reduction in brain activity was observed when a person’s sleeping time decreased.

Even so, scientists specified that the greatest decrease in this activity happened in the prefrontal cortex and in the parietal lobe. This measurement happened specifically with verbal activities and researchers think it’s a consequence of the brain’s extra work while trying to stay awake and alert.

Does lack of sleep affect your cognitive functions?

Nowadays, it’s clear that sleeping is essential to develop proper daytime cognitive functioning. Researchers found that the decrease of 1.3 hours of sleep per week in one week leads to a 32% decrease in the level of alertness. It has repercussions on both physical and cognitive activities.

Memory and learning are processes related to proper sleep. Scientists found that the information humans acquire during the day consolidates during sleep. Also, that sleep is essential for learning.

For this reason, the decrease in the amount of daily sleep affects these functions. There are different sides of memory related to the various sleep phases within said investigations.

For example, the consolidation and coding of new information in memory depend on REM sleep and the NREM 2 phase. Therefore, not being able to complete all these phases creates problems for the consolidation of memories. The effects can translate to poor academic performance, for example.

There’s also a relationship with learning new information. In this case, a lack of sleep decreases the activity of the hippocampus, a vital structure for memory coding. Thus, it’s an obstacle for the retention of information as well.

Similarly, researchers found that a lack of sleep leads to the kind of daytime sleepiness that directly impairs a person’s attention. Here, the monitoring capacity decreases, so it usually loses or omits the relevant elements needed to perform an activity.

It’s also hard to stay focused on the same activity for a long time. If you add to it the increase in your reaction time, it can cause a problem such as a traffic accident or failing a test.

When there’s lack of sleep, reaction times usually increase significantly. Also, a person is more likely to make mistakes when doing certain activities. Thus, they need more time to do something and, even then, they may have trouble following up properly.

This affects multiple facets of their life, such as their academic performance, since it can lead them to not understand or properly perform a task as specified. Also, you can observe problems in automated activities such as driving a car. This is because they may not react fast enough in a daily situation.

Does lack of sleep affect the emotional sphere?

This is another significant aspect of lack of sleep. Researchers found that sleep deficit causes temporary changes in mood, creating feelings of depression and anxiety in a person.

Similarly, little sleep affects your emotional intelligence and constructive thinking. It has several outcomes. The first one is intrapersonal functioning. This is because lack of sleep reduces assertiveness, sense of independence, and personal growth.

The second one is that it affects interpersonal functioning, as the empathy towards others reduces, along with the quality of your relationships. Scientists observed that there’s a decrease in recognizing emotional gestures pertaining to joy and anger. As a consequence, it significantly affects your relationship with others.

Finally, there are problems with proper stress management. Therefore, a sleep-deprived person shows difficulties in controlling some of the impulses in such situations. Also, there’s a delay in the activation of the gratification system, which can increase stress during the development of some situations.

The relationship between a lack of sleep and physiological activities

Sleeping is closely related to physiological activities and it’s important to regulate your cognitive, emotional, and physical activity. Among the main systems:

This is a disorder in which a person doesn’t get the nighttime sleep they need to stay alert during the day. It’s not organic in origin but due to external factors. Mainly, it’s due to a voluntary sleep restriction motivated by other interests that come into play, such as having fun or working late.

This is common in teenagers and college students, as many are frequently tired during the day. Also, they need help getting up in the morning so as not to do so too late.

Some of the factors related to lack of sleep are:

Finally, let’s emphasize the need to sleep as much as you need to. As you can see, not doing so has negative emotional, cognitive, and physical consequences. Therefore, sleeping is fundamental to your performance on many different levels, not only physically but also mentally.

As you can see, you must think about the risks of not getting enough sleep. Thus, make it a point to prioritize sleep before other activities. In the long run, you’ll feel the result of such an effort in your body and you’ll feel great about it.