The world knows Expressionist painter Edvard Munch for his human psyche investigation. Read on to learn much more about this Norwegian pioneer who painted icons like The Scream. 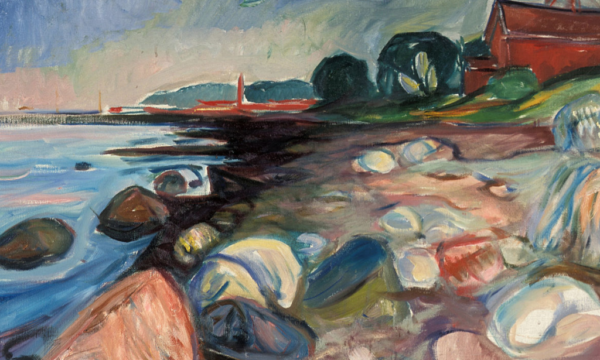 A pioneer of Norwegian Expressionism, the world knows the painter Edvard Munch for his deep investigations into the human psyche. His most recognizable artwork, The Scream, is a touchstone in the history of art. The painting became an icon ever since it was painted in 1893. It’s an ironic commentary on human anguish and suffering, but often people know quite little about its creator.

So who was Edvard Munch and what led him to create such a powerful piece of art? A pioneer in his day, this trailblazing artist was often misunderstood by critics. They were shocked by his dark depictions of life and death. But, as often happens to avant-garde visionaries, he won out. By the end of his life, he was a celebrated artist.

The Scream continues to stand out in the history of art. People now highly appreciate Munch’s contributions to the 20th-century. But many don’t understand the full story behind this Norwegian artist. Some people don’t even know the reasons that led him to create the breakthrough artwork.

Munch’s life was hard, from difficult family history to his own story with mental illness. However, thanks to each event in his life, he became the creator of one of history’s most renowned paintings. Learn more about the life of Edvard Munch through these surprising facts and quotes about the artist.

1. His childhood was plagued by illness

Illness had a profound effect on Edvard Munch’s childhood and this followed him throughout his life. In fact, he wrote, “Disease, insanity, and death were the angels that attended my cradle, and since then have followed me throughout my life”.

Additionally, another of his sisters was diagnosed with a mental illness at a young age and his brother died shortly after he was married. This environment shaped Munch’s macabre sensibilities as an adult. The expressionist painter also wrote:

“My fear of life is necessary to me, as is my illness. Without anxiety and illness, I’m a ship without a rudder. My art is grounded in reflections over being different from others. My sufferings are part of my self and my art. They’re indistinguishable from me, and their destruction would destroy my art. I want to keep those sufferings..”

2. His family didn’t support his art

Edvard Munch’s father, Christian Munch, was a doctor and son of a priest. Quite pious in nature, Christian was extremely disappointed by his son’s decision to leave technical school. After all, he considered painting an “unholy” profession. It’s even believed that his father may have confiscated some of Munch’s early nude paintings.

While Munch’s family was uncomfortable with his professional decisions and didn’t agree with the bohemian circles he ran with, he still relied on them for support. Munch’s relationship with his father continued to remain tense, however, and was only exacerbated by the subject of his paintings.

For instance, both critics and his family negatively received his 1886 work The Sick Child. The troubled artist based this brilliant piece on his sister’s death. Later, after his father passed, Munch took on the financial burden of supporting his family. This weighed heavily on him. He once wrote:

“From the moment of my birth, the angels of anxiety, worry, and death stood at my side, followed me out when I played, followed me in the sun of springtime and in the glories of summer. They stood at my side in the evening when I closed my eyes, and intimidated me with death, hell, and eternal damnation.”

Munch’s art flourished after he began to travel, first to Paris during the 1889 World’s Fair. While in Paris, he met Paul Gauguin, Vincent van Gogh, and Henri de Toulouse-Lautrec. The work of these artists utterly influenced Munch’s use of color. He would also begin experimenting with printmaking after viewing work by Gauguin and the German artist Max Klinger.

Munch’s woodcuts made him a pioneer of Norwegian printmaking. He later moved to Berlin, where he ran with an international circle of creatives. When he was in Berlin, he sketched the majority of his ideas for The Frieze of Life. This trio of paintings later became his most significant cycle of artworks.

During his time in Berlin, Edvard Munch’s style also matured.  He began to favor compositions that evoked insight into psychological conditions. As a matter of fact, it was while in Berlin that Munch created several versions of The Scream. The expressionist painter also wrote:

“By painting colors and lines and forms seen in quickened mood I was seeking to make this mood vibrate as a phonograph does. This was the origin of the paintings in The Frieze of Life.”

4. A hallucination inspired The Scream

Crying out in despair and agony, the figure in Munch’s The Scream, touched a nerve with the public since its creation. By depicting a disturbing aspect of the human condition, Munch used his own pain to connect with others. As mentioned before, he painted several versions of this brilliant artwork.

Edvard Munch has no qualms about reworking the same painting. For his aforementioned series The Frieze of Life, he often repainted new versions of paintings that sold. The Scream is part of this series, which discusses universal themes of life, love, and death.

It alone exists in numerous versions, including two pastels, two paintings, and numerous lithographs. Munch also created several versions of his lovely piece Kiss, painted in 1902. In his diary, he wrote about his inspiration for his famous painting The Scream:

“One evening I was walking along a path, the city was on one side and the fjord below. I felt tired and ill. I stopped and looked out over the fjord—the sun was setting, and the clouds turning blood red. I sensed a scream passing through nature; it seemed to me that I heard the scream. I painted this picture, painted the clouds as actual blood. The color shrieked. This became The Scream.”

5. He spent eight months in a mental hospital

Given Munch’s tumultuous life and issues, it should come as no surprise that he suffered from mental health issues. In 1908, things came to a head. After suffering from hallucinations, he had a nervous breakdown and enrolled himself in a clinic. He spent eight months undergoing treatment before being released and returning home.

Upon his release, he resumed painting and his work took on a new tenor. Bright and optimistic, his later paintings were more well-received by the public and museums started purchasing his work. This was Munch’s greatest period of financial success and when he was finally able to provide for his family in the manner that he had always hoped. He once wrote:

“My whole life has been spent walking by the side of a bottomless chasm, jumping from stone to stone. Sometimes I try to leave my narrow path and join the swirling mainstream of life, but I always find myself drawn inexorably back towards the chasm’s edge, and there I shall walk until the day I finally fall into the abyss.”

Since Edvard Munch’s masterpieces were donated to the Norwegian government, the country erected the Munch Museum in 1963. It perfectly commemorates his work, his life, and his generosity. Now the general public can enjoy his pieces.

Though he donated his art throughout a number of museums and art exhibits, most of them are now in the National Gallery in his hometown Oslo. His unique artwork keeps speaking to the modern situation of individuals facing the uncertainty of a rapidly changing world. Edvard Munch keeps inspiring many people.

Love Is a Shared Journey
Do you believe in soul mates, or do you understand that love is a shared journey? That's what we're talking about today. Read on! Read more »
Link copied!
Interesting Articles
Emotions
The Three-Hour Rule - Adult Tantrums

The three-hour rule helps adults deal with disappointment. Surprisingly enough, tantrums are very common in grown-ups, although they're not visible…

Feeling sadness run through your body is natural. Feeling it cloud your mind and struggle to get out. However, many…

Wellness
10 Tips To Start Taking More Care Of Yourself

A few days ago, I had the privilege of enjoying one of the many videos published by writer Elsa Punset,…

Wellness
The Problem with Preoccupation

The word preoccupation, as its name suggests, means to address before it is time. When we live preoccupied about tomorrow, we…