Edvard Munch is among the most important and influential artists in modern art. His work made an impact mainly in Germany and the Scandinavian countries, where he was considered one of the two greatest expressionist artists. 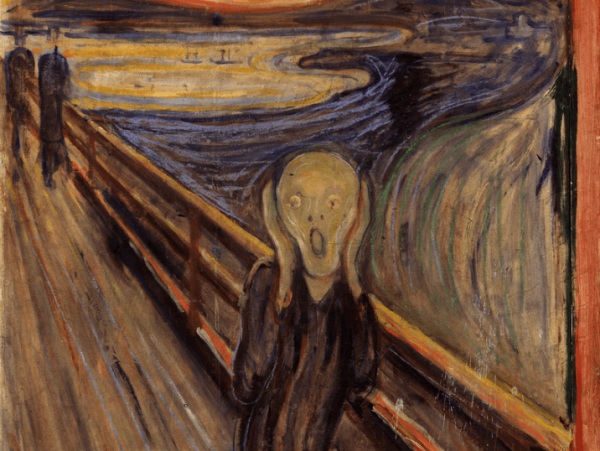 Edvard Munch was a Norwegian painter and engraver whose work intensely evokes psychological themes. As a painter, we associate him with the Symbolist movement of the late 19th century.

The childhood and youth of Edvard Munch

Edvard Munch was born on December 12, 1863, in Löten, Norway. His middle-class family had unfortunate health problems. His mother died when he was five years old and his older sister when he was 14 years old. Both died of tuberculosis.

Munch even recreated this theme in his first masterpiece, The Sick Child, in 1885. Munch’s father and brother also died when he was still young. The only sister left alive developed a mental illness shortly after.

Munch showed a gift for drawing at an early age, despite receiving little formal training. An important factor in his artistic development was the Kristiania Bohème, a circle of writers and artists from Kristiania, as Oslo was called.

The members of this circle believed in free love and generally opposed bourgeois narrow-mindedness. Christian Krohg, one of the oldest painters in the Kristiania Bohème circle, gave Munch instructions and encouragement.

Early on, Munch succeeded in overcoming the naturalistic aesthetic that prevailed in Kristiania. This was largely a result of him being influenced by French impressionism after a trip to Paris when he was 26 years old.

He was undoubtedly strongly influenced by the work of post-impressionist painters Paul Gauguin and Henri de Toulouse-Lautrec. He also took on the same ambition as the synthetic artists, which was to go beyond the simply describing objects and situations externally, and to express the inner vision that he saw in them.

Munch’s deeply original style crystallized around 1892. The fluid and tortuous use of lines in his new paintings in this period was similar to that of contemporary Art Nouveau.

However, Munch used lines not as decoration but as a vehicle for deep psychological revelation. The violent emotion and unconventional images in his paintings, especially his bold depictions of sexuality, created deep controversies.

Norwegian critics, as well as his counterparts in Berlin, expressed outrage at his work, which was due to their misunderstanding of what he was trying to get across. This happened when Munch exhibited many of his paintings in the German capital in 1892, at the invitation of the Berlin Artists’ Union.

The critics were also offended by his innovative technique, which seemed to most people to be unfinished work. This scandal, however, helped him make his name known throughout Germany, and, from there on, his reputation spread even further.

Paintings of love and death and The Scream

At the heart of Munch’s legacy is his series of paintings on love and death. Its original core consisted of six images put on display in 1893, and the series had grown to 22 works by the time it was exhibited. The first exhibition in the series was entitled The Frieze of Life in the Berlin Secession (a German artistic movement) in 1902.

Munch constantly reorganized these paintings, and if any were to be sold, he would produce a new version of it. For this reason, in many cases, there are several painted versions and prints based on the same image.

Although The Frieze of Life is based deeply on his personal experience, its themes are universal. His work isn’t about particular men or women, but about men and women in general. His work touches on the theme of human experience and the great elemental forces of nature.

Seen in sequence, this series of works shows an implicit narrative of the awakening, blossoming, and withering of love, followed by despair and death.

In many of his paintings, the power of the image is enhanced by the claustrophobic enclosed space and the abruptly rushed perspective. An example of this kind of dramatic perspective is used in Munch’s most famous work, The Scream.

The Scream was inspired by an amazing experience in which Munch felt and heard “the great scream throughout nature”. It depicts a panic-stricken creature, which at the same time resembles a sperm or a fetus, whose contours echo in the swirling lines of the blood-red sky.

“My sufferings are part of my self and my art. They are indistinguishable from me, and their destruction would destroy my art. I want to keep those sufferings.”

In this painting, anxiety rises to a cosmic level. The anxiety of the painting is ultimately related to the reflections on death and the void of meaning that should be fundamental to existentialism.

The first two versions of The Scream date from 1893. Munch created another version in 1895 and completed a fourth in 1910.

Edvard Munch: his work in graphics

His art also had obvious affinities with the poetry and drama of his time. Furthermore, we can make interesting comparisons with the work of playwrights Henrik Ibsen and August Strindberg, whom Munch painted portraits of.

The main attraction of printmaking for him was that it allowed him to communicate his message to a much larger group of people. Printmaking also allowed him to expand opportunities for experimentation.

His lack of formal training in any graphic medium was undoubtedly a factor that pushed him towards extremely innovative techniques.

Like many of his contemporaries, he was influenced by Japanese traditions in his use of woodcuts. However, he radically simplified the process, for example, by printing using a single block of wood sawn into several small pieces.

Munch’s use of real wood grain for expressive purposes proved to be a particularly successful experiment, which had a great influence on later artists.

The painter was hospitalized several times between 1905 and 1909 for alcoholism associated with depression and suicidal tendencies.

He was constantly involved in acts of violence, fights, and aggressive behaviors. A fight with another painter forced him to abstain from returning to his homeland for four years. Several of his paintings have portrayed this dispute.

A particularly important commission, which marked the late acceptance of his importance in Norway, was for the Murals of the University of Oslo (1909-16). The centerpiece of this series was a vast painting of the sun, flanked by allegorical images.

We could say that it was mainly through his work in the 1890s that he shaped the mysterious and dangerous psychic forces that he would leave to later artists in modern art.

Munch, a lifelong Jew, was an artist rejected by the growing European Nazis. In 1937, his work was included in the Nazi exhibition of “degenerate art” as an example of Jewish artistic perversion.

“Illness, madness, and death were the black angels that kept watch over my cradle and accompanied me all my life.”

Munch died on January 23, 1944, in Ekely, near Oslo. The painter bequeathed his estate and all his paintings, prints, and drawings to the city of Oslo.

The city erected the Munch Museum in 1963, on the 100th anniversary of his birth. Many of his best works are in the National Gallery in Oslo.

Munch’s concentration on the “emotional essence” sometimes led to radical simplifications of form and an expressive, rather than descriptive, use of color. All these trends were taken up by several younger artists, particularly the leading proponents of German expressionism.

“From my rotting body, flowers shall grow and I am in them and that is eternity.”

Perhaps his most direct formal influence on later art can be seen in the area of wood engraving.

His deepest legacy for modern art, however, lies particularly in his use of art for the purpose of addressing universal aspects of human experience. His work continues to speak to the typically modern situation of the individual, in the face of the uncertainty of a rapidly changing contemporary world.