Sometimes All We Need Is a Caress 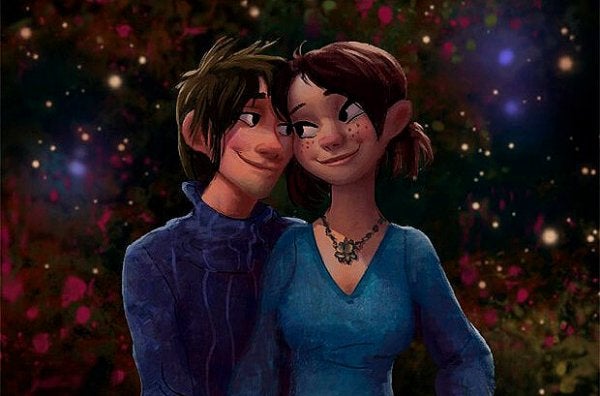 Sometimes all we need is a caress. Nothing more. We don’t want the same old words, nor the same phrases that have been used time and time again. We want to be reaffirmed, welcomed and valued by the contact of that hand moving softly over our skin…

Few things offer such an emotional and mental calming effect as the simple act of caressing someone. Furthermore, within the field of humanistic psychology and transactional analysis, they tell us that every person needs to be touched by the people they love in order to feel “acknowledged.”

Nothing is more pleasing than an unexpected caress, such as the touch from someone who, despite being covered by a thousand scars, is still capable of offering the softest caresses.

Sensory deprivation is a reality that isn’t only experienced by a baby towards his mother. It also exists between couples, and it can happen at anytime. These are bonds which lack an adequate amount of contact, where the person isn’t recognized by caresses, hugs, or kind words…

In this kind of relationship, there is no transmission of affection, or that love that goes beyond words. A child that suffers from maternal sensory deprivation experiences a much slower development and possible reactive and emotional disorders later on.

On an emotional level and within a couple it may happen that one of the two people lacks that implicit emotional wisdom in their simple caresses, which help build up an authentic relationship.

In these cases, the other member of the relationship will feel empty and will doubt the feelings and validity of the compromise of said relationship. Caresses are the food needed by the soul and our emotional brain in order to feel part of this world. To feel like a part of the things you love.

A caress: a psychological, biological and social necessity

A caress is a weapon of power, an essential gesture which encloses a whole world of emotions, inner balance and psychological well-being. This need to be recognized is something that will characterize us for life.

A caress builds life, it reaffirms and constructs it, and weaves an invisible blanket that unifies us to that person who resides within our heart. No technology can substitute something like that. No machine has the warmth of a hug, nor the sweetness of a caress.

They also say that the way in which a person has received their caresses throughout their childhood will also determine the way they expect caresses from others.

If they never received a caress, it’s very possible that they won’t know how to offer them. But their need to receive them will be without a doubt very intense, despite not really recognizing this need. It’s complex, because our deficiencies during childhood will determine many of our aspects in adulthood.

And though there may be many inter-individual differences, the need for touch, closeness and affection is universal. It isn’t only found in humans, but also in animals. In fact, we can see this need in our pets.

The power of unconditional caresses

In order for a caress to have an impact, relevance and transcendence, it must be unconditional. I caress your face with my hand, because that’s what my heart feels, because I recognize you as a part of me. And I do so selflessly. Unconditionally.

A caress is above all a sensory stimulus. A sensation is produced. But in order for it to be authentic and unconditional, this caress needs to awaken feelings and positive emotions.

If the caress is sincere and unconditional, an adequate reciprocity is established. The two people recognize themselves as part of each other. They receive these caresses as a type of language that bonds and fortifies them.

People don’t caress others simply to offer pleasure, to soothe, or to care for and gratify. We caress to transmit a part of ourselves and build a bond.

Once a caress is given, it is what it is. Later the other person must judge it as something authentic or fake. Because, let’s not forget, there are also some caresses that can cause harm; pious or ironic caresses that can destroy the bond.

A caress can say a lot about us. Therefore, we must offer them calmly, with tenderness, transmitting those complicit messages which need no words.

Caresses as part of healthy attachment

Within our website we often talk about the concept of attachment. And while it’s true that often attachment is perceived as “dependence” or clinging too much to something or someone; from a humanistic or emotional point of view, people need healthy attachment in order to create a bond.

A caress is a gesture through which we recognize, enfold and integrate one or more people into our being. They become a part of our hearts, and we need that skin to skin contact to reaffirm our emotions.

A caress is a word etched on the skin which we all need to receive, because there is no better glue for broken hearts than a whole load of caresses.

Mature love is defined by life experience and a serene heart. We are talking about souls in their autumn years…

Wellness
Find Out What Motivates You

Motivation is something that we need to be able to continuously get up each day and focus on our responsibilities and goals. But sometimes we fail to find the right motivation. Many times, our life…

Wellness
What Seems Like an Ending Can Be My Best Beginning

A certain number of years will go by and I will die. That may be my definitive ending, but until…

"Among all the places in the world, there are always favorites. It doesn't matter how much you move, how much you travel,…