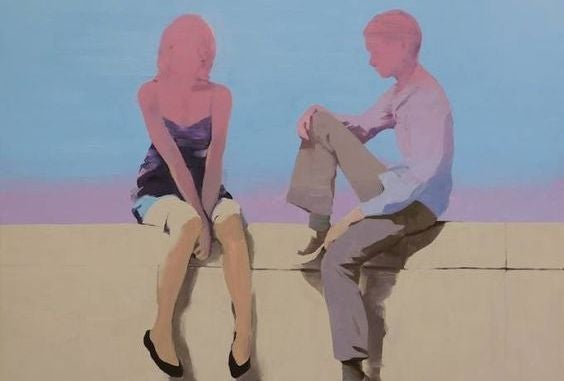 Some relationships are like unsalted eggs: tasteless, insubstantial, anchored in a monotonous situation that drowns you in the long run. This is a reality that affects a lot of couples, although they may have already started to see it as normal, something that will pass.

However, you can change it, as long as you want to. Recovering the spring in which your love inspired and moving away from the fall that seems to keep getting closer and closer to winter. Affection doesn’t age like we do. If this is happening, it’s because you’re letting it. Maybe you’re tired of maintaining and cultivating it.

“The affective impulse must move freely not to die.”

We make the mistake of locking the caresses, the cuddles, the loving words in a safe that now inhabits the past. Before, it was important for you to show the other person that you loved so much how you felt. When did you stop repeating it and fall into the comfort of assumptions?

We’ve heard numerous times that love runs out, that it dies, that it changes over time. We blame the passage of time to feel better about ourselves and not take responsibility for not doing things well.

It’s not just that we abandon ourselves, it’s that we set aside what we fought for with so much effort and passion years ago. Now that we have it, do we stop making an effort? First, it was one; then, the other. In the end, we become two people who allowed the love to fade away into a simple memory.

This is the point where assumptions appear, which causes so many understandings in our interpersonal relationships. But they have the largest effect on romantic relationships. It’s better to keep repeating, to get tired of always saying the same thing, than to take things for granted.

“Why should I tell my husband that I love him if he already knows?” “I don’t have to give her a kiss, she already knows that I love her.” “We’re too old to cuddle in public.” I’m sure some of these thoughts sound familiar to you. Many couples think the same things.

There are some relationships that do not feel or suffer, that are superficial and are governed by monotony.

However, in the past you didn’t care about saying “I love you” infinite times to the love of your life. You always gave them a kiss as they walked out the door to go to work. You didn’t think about the appropriateness of the situation to hold their hand or give them an unexpected hug. It just came out of you. You wanted to feel your partner close to you. You wanted to show them again and again how you felt.

True Love Isn’t Born, Nor Does It Appear – It’s Built.

The flame doesn’t just go out; we blow it out ourselves. We can continue fanning it and escape from the situation that we’ve settled into. All for being too lazy to say something to your partner that you once insisted on saying so much. Fatigue over making an effort for something you’ve already achieved.

Many people give their all at the beginning of a relationship. They’re like an inflated balloon. But when they’ve already gotten what they wanted, they gradually deflate, until there’s nothing left of all they had done. Acting this way, do you still wonder why you don’t have as much intimacy as before, why everything has changed?

Relationships succumb because of our bad attitudes. We stop thinking about the other person and focus on ourselves. We justify our inability to continue giving everything by saying “they already know it.”

I know that the love is there, but it’s silent, barely present. A timid/shy love, perhaps, that sometimes gives me doubts.

The relationship does not roll along by itself, it’s not self-sufficient. It needs to be constantly nourished, day after day, with more care as you spend more and more years together, because there are also more circumstances that threaten to wear it down. You look enviously at all those old couples who walk hand in hand, who respect each other, who don’t hide their affection in public, and you ask yourself…how do they do it? By taking care of and paying attention to that feeling that’s so honest, sought-after, and hoped for.

It’s a reciprocal feeling that doesn’t care about repetitions or rational reflection. The second you start to assume, think, and believe, love gets weaker. It should be free to be felt and experienced in its entirety. It’s never boring, we make it so. It never turns uninteresting, we’re the ones who become dull.

Relationships are sustained if the hands that do so are secure and prepared to give everything to it today, tomorrow, and forever. The years don’t matter, all that matters is attitude.

The Importance of Attitude

Pain is an emotion that will always be a part of our lives. From the moment we're born, we start to…

Jujitsu, also known as the martial art of flexibility, can also be applied to your thought life to defend yourself…

Wellness
I Choose to Be Positive

When you're going through a tough moment, the worst thing you can be told, which rubs you the wrong way, is a saying like: Be positive! Don't take things the…

Wellness
Do Women And Men Perceive Infidelity In Different Ways?

Infidelity is one of the biggest tests that a relationship can go through. In most cases, it will end the…

Personal Development
Have I Wasted My Life?

Perhaps the years have gone by without you having noticed. Work obligations, the daily grind, and a great number of worries have kept you busy. So busy, in fact, that…

Wellness
8 Things You Should Know About True Love

To love means to truly know, recognize and assume that people have as many flaws as they have virtues, that…