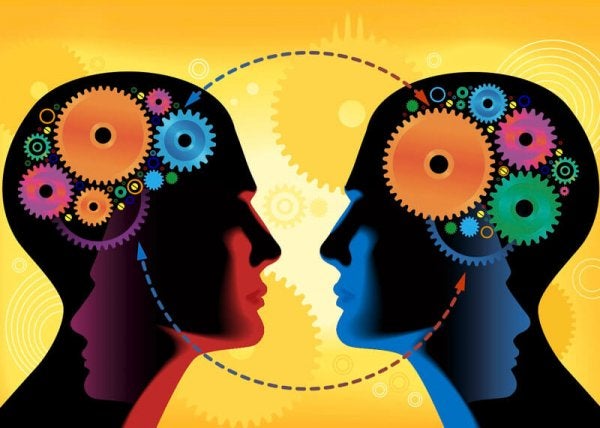 How do we learn about people? Understanding what mechanisms, gears and complex subtleties that set a behavior or skill in motion has always been one of the goals of psychology. Albert Bandura introduced the theory of social learning, a theory on the interaction between the mind of the learner and their environment.

Most of us don’t have a clue how children learn things. Some people still see the teaching or the acquisition of a certain skill as the result of the classic behavioral approach, something based on imitation, conditioning and positive or negative reinforcement.

However, nothing is so intricate, complex and fascinating as the mind of an apprentice, the brain of a child or the ability of an adult to generate a behavior or acquire specific knowledge. None of us is a empty box to fill based on external pressures and constraints. People observe, imitate, develop in a particular social environment and in turn have certain mental states that encourage or hinder learning.

Albert Bandura, a Canadian psychologist and professor at Stanford University, addressed these questions to formulate what we now know as Social Learning Theory. It’s an approach where the behavioral and the cognitive meet.

What does Social Learning Theory tell us?

Bandura’s social learning theory is also known as observation learning or modeling. To add a little context, it started in the 60’s, a time when behaviorism held much weight and learning was thought of as a simple giving and receiving of information from expert to apprentice. One sent and the other received. In other words, the expert was the active hub and the apprentice the passive hub.

Albert Bandura, on the other hand, looked beyond that behavioral reductionism to the field of the social. Lev Vygotsky with his Sociocultural theory, was another. Bandura said that children learn certain lessons quickly without trial and error. If so, there was one big reason: observation and social environment.

The Bobo doll experiment is one of the best known in the field of psychology. Throughout 1961 and 1963, Bandura and his team sought to demonstrate the importance of observational learning in children and how the imitation of a model — an adult — is much more significant to children than simply giving or removing a reinforcement.

Bandura demonstrated that there are 3 basic forms of observational learning:

The Theory of Social Learning is often described as a “bridge” between traditional learning theory (e.g., behaviorism) and the cognitive approach. Bandura, unlike Skinner, always saw mental (cognitive) factors in learning as important. In fact, he defined “learners” as actively processing information and assessing the relationship between behavior and consequences.

Therefore, we should not fall into the error of thinking that people imitate everything they see, and that absolutely all children are going to carry out aggressive behavior just from seeing violent scenes at home or on television. There are thoughts before imitation. Additionally, there are mediators that will encourage the imitation or an alternative response.

Here are some of those mediators:

Our society is not entirely homogeneous. Rather, it consists of and also produces the most varied environments and scenarios. Some are more favorable, and others are more oppressive.

Let’s look at an example. Carlos is 11 years old and this year he has a new violin teacher. At the beginning he was fascinated by the instrument. He wanted to have one, to learn more. However, his father unconstructively and quickly got the idea out of his head. “That’s nonsense!” he yelled. Since then, Carlos stopped having an interest in the violin.

For a behavior to be imitated it has to capture our attention, interest, and mirror neurons. Every day we all observe many behaviors. However, they are not all worthy of our interest.

Motivation is the motor, the will to perform a certain behavior that we see in others.

To conclude, the Social Learning Theory was one of the most interesting qualitative leaps in the field of psychology. In fact, we could still say that Albert Bandura, at 91, is one of the most valued and decorated personalities of the field.

Thanks to him we better understand how we acquire knowledge and generate certain behaviors. We see how the external — the social — is related to our internal processes — the cognitive — and how we also serve as a model for other people in our environment, many times without realizing it.

The Challenge of Learning How to Be Angry
Is there any way to learn how to be angry and show it at the right time and to the right person? Yes, but as always you have to do some work on yourself first. Read more »
Link copied!
Interesting Articles
Social Psychology
Jay Haley and Strategic Therapy

Have you heard the term "Frugal Four" recently? It mainly refers to certain countries such as Austria, Denmark, Sweden, and…