Learning about Cognitive Development in Children through the Eyes of Piaget 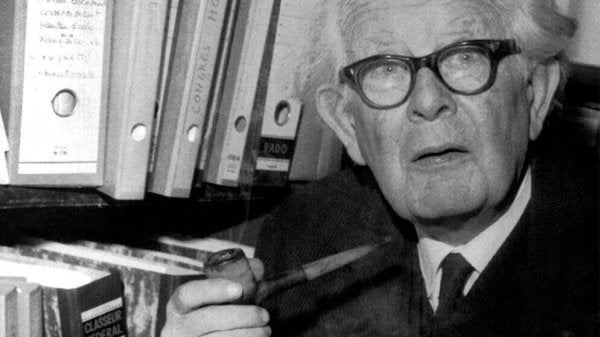 Jean Piaget is a quintessential reference point in the study of cognitive development in children. He devoted his whole life to studying childhood, even his own children, to uncover the secrets of development. He is also known, along with Lev Vygotsky, as one of the fathers of constructivism.

One of Jean Piaget’s most famous theories is his division of children’s cognitive development into four different stages. He devised this to look for a theory that could explain the general development of an infant.

However, we now know that it leaves too many aspects unevaluated for it to be accepted as a theory of general development. But this classification is a useful guide for understanding how we develop our logical-arithmetic capacity in childhood.

The stages of cognitive development in children

Many psychologists thought development was an accumulative phenomenon, where new behaviors and cognitive processes are generated.

On the other hand, Piaget, after his studies, drew up a development theory based on qualitative leaps. Here the child would accumulate capacities, but sooner or later that accumulation would change his way of thinking qualitatively.

Piaget divided infant cognitive development into three stages with a series of substages, and later he completed it by extending it to four. These four stages are: (a) sensorimotor stage, (b) preoperational stage, (c) concrete operational and (d) formal operational.

This stage is prior to the appearance of language, from birth to approximately two years old. This period is characterized by the child’s reflex capacity.

A child’s life in this period is based on relating his perceptive capacity with the motor. In his mind there are only practical concepts, such as knowing what to do, what to eat or getting the attention of his mother.

Little by little, throughout this period, the child generalizes the events of his environment and creates ideas of how the world works.

As these ideas intersect, the child develops the idea of permanence of objects and understands that objects exist as entities that are foreign to him.

Before developing this idea, anything a child can’t see, hear or touch, as far as they’re concerned, doesn’t exist.

The end of this stage is marked by the appearance of language. Language in a child means a profound change in their cognitive abilities.

This is usually accompanied by the semiotic function: the ability to represent concepts through thought. The child would go from having a purely practical mind, to a mind that also acts on a representative level.

We can put this stage between two years and seven years old. Here we’re in a period of transition where the child begins to work with his semiotic ability.

Although he has already achieved a level of representation, his mind still differs a lot from that of an adult. Here we come face to face with their “egocentricity”.

For him, his subjective experience is the objective reality that exists in the same way for all individuals. This shows us something still lacking in the Theory of the mind. From the age of 4, we begin to lose this egocentricity and develop a theory of the mind.

An example of this is when a child at this stage is shown a glass full of water and we pour that water into a narrower but taller glass. The child will think that there is more water than before. He is incapable of understanding that transforming something doesn’t change the amount of the existing material.

This period encompasses the years between 7 and 11 or 12. At this stage the child has managed to leave behind the full confidence he had in his senses. Here we can see the development of concepts, including how transforming the shape of something doesn’t alter the amount.

The child begins to construct a logic of classes and relationships unconnected to perceptual data. The child understands transformations and that they can occur in the opposite direction (adding instead of removing, for example).

And an important aspect is that he will be able to perform these operations by representing them in your mind, without having to perform them with actual objects.

Even though he controls operations and logic, he can only perform them with specific objects he’s familiar with. He is unable to theorize about what he doesn’t know or is outside his perceptual knowledge. The child will get this ability in the next stage.

This is the last stage of development, where the child will become an adult on a cognitive level. This stage is characterized by the acquisition of scientific thought. While the child can reason about real things, now he can also reason about the possible.

This period is characterized by the ability to make hypotheses and examine the possible consequences of these hypothetical possibilities. The child has perfected his testing procedures and doesn’t accept opinions without examining them.

The child will begin to acquire new knowledge and intellectual tools. These will allow him to develop as a competent adult within society.

However, from this point on, he won’t experience any other qualitative leap.

While he may get faster or more precise with his mental operations, but he’ll still think in the same way.

Now that we’re familiar with Piaget’s theory of cognitive development, do you think children actually develop like that? Or does this theory fall short when it comes to explaining human development in its entirety?

Love: The Key to a Child’s Brain Development
Love is one of the most powerful environmental factors in the development of areas in the brain that contribute to emotional health. Read more »
Link copied!
Interesting Articles
Psychology
Daniel Goleman and His Theory on Emotional Intelligence

A brilliant brain and a high IQ are rather useless if we do not understand empathy. If we don't know…

Psychology
What is Musical Intelligence? How Can I Improve It?

In Ken Robinson's book, "The Element," he tells the following story about painting: a school teacher was giving an art class and at the back of the classroom a little girl was…

Psychology
Courage Is Seeing Hope in the Darkness

Most of significant, amazing things that have happened in the world have been accomplished by people who had the courage…

Did you know dancing has many psychological benefits? Have you tried all that dance has to offer? This article will…