Social Dramaturgy: How We Develop Masks to Interact 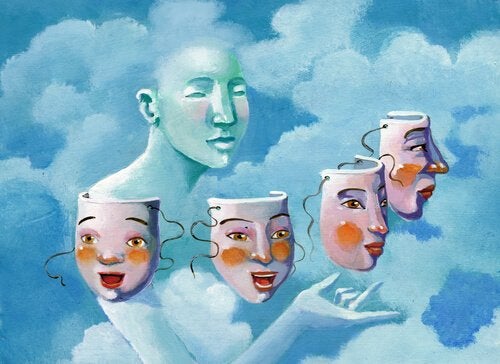 It’s possible to analyze our interactions with others as if we were in a play. Namely, as if our social life consisted of a series of masquerades. Social dramaturgy is a micro-sociological approach that focuses on the study of human behavior and on the rules that govern our daily interactions.

In Plato’s Symposium, Socrates asks which genre of ancient Greek drama, comedy or tragedy, more closely resembles real life. Socrates argued that it was tragedy. However, it was Erving Goffman, the creator of symbolic interactionism, who said that life was a stage. Goffman argued that in every social interaction we engage in, we consciously or unconsciously try to project a concrete image of ourselves. In other words, we try to manipulate how others perceive us.

For Goffman, our personality isn’t an internal phenomenon. Instead, it’s the sum of all of the different ‘masks’ that we put on throughout our life: a social dramaturgy.

What is social dramaturgy?

Both theatre actors and social actors have the same objective: to be congruent in their interactions with those around them. In order to convey a good impression, we must have dramatic (social) skills and the necessary costumes and props.

However, all of this is irrelevant if the actors on stage can’t agree on the expectations and limitations of their play. In other words, their ‘interpretation’ implicitly indicates how to act in a certain setting (social environment).

The stage and the backstage

There are two important elements in social dramaturgy: the stage and the backstage. In particular, the stage consists of the moments in which we project an image of ourselves for others. On the other hand, the backstage is our private life, which can also be another mask we put on for ourselves.

Social dramaturgy consists of knowing how to move between the stage and the backstage. Additionally, skillfully changing from one set to another and having an appropriate costume at all times are essential requirements for social success. Thus, whoever doesn’t know how to act during the play is a danger to the cast and may be discarded.

While we put on our act, our comments and expressions of surprise, approval, irony, or disgust shape others’ opinions of us. We’re aware of this, which is why we control what we say, ponder our gestures, and monitor our reactions. We’re always acting. Furthermore, we define our roles based on the surroundings we find ourselves in to try to fit in.

We’re always adapting to our role. Just like TV show actors, we may start the first episode with our personality and our job, educational, or relationship situations undefined. We may start changing and defining these aspects once we hear our audience’s reaction. From there, we dedicate our lives to adapt to the character. Or at least until they cancel our show and we have to throw that mask away. For example, we could quit our job, divorce our partner, or graduate from school.

For Goffman, in this social dramaturgy, people try to present an ideal image every time they interact. This is because we believe it’s beneficial to hide some parts of ourselves:

Role Theory: What’s Our Role in Society?
We can define social roles as the different roles we play within society. Why are roles important, and how do they affect us? Read more about role here! Read more »
Link copied!
Interesting Articles
Social Psychology
Psychosocial Support after Disasters

Interesting Articles
Emotions
5 Emotions that Come with a Personal Crisis