A Smile Is the Canvas of Inspiration 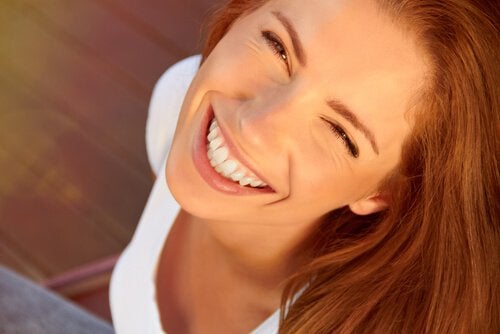 A child laughs 400 times a day, however the happiest adult does not exceed 100 times. The average is between 20 and 30 times a day. As we age, laughter and smiles disappear from our lives despite their benefits and, incidentally, we learn to pretend instead of showing our sadness.

We often hide our feelings under a smile by saying that nothing happened, when in fact we are sad, but do not dare to explain why and we think it is easier to smile than explain our sadness to others.

“I think that what is called beauty rests solely in a smile.”

Even before birth, babies smile. As demonstrated by a team of Japanese scientists in 2012, 31 fetuses were recorded for 62 minutes through an ultrasound technique. They found that in those 62 minutes they produced 51 smiles, with an average duration of 3.21 seconds. Thus, it was shown that even before birth we are able to smile.

How to distinguish a fake smile that hides sadness

Over time there have been several studies on the subject. In 1862 the French neurologist, Duchenne Boulogne, conducted a study which reached the conclusion that a fake smile only involves the muscles of the mouth and lips, while an active, sincere smile involves the muscles around the eyes.

In 1973, the psychologist, Paul Ekman, conducted an experiment that showed 30 photographs of the faces of 14 people from different cultures which expressed six primary emotions (joy, fear, surprise, sadness, anger and disgust) and concluded that emotions, especially joy, were expressed in the same way by most subjects.

More recently, in 2012, scientists at the Massachusetts Institute of Technology (MIT) developed a system to distinguish a fake smile from a genuine one. To do this they asked a group of volunteers who, first, feign frustration after filling out an online form specifically designed to cause frustration (When filling out the required fields and clicking “OK”, all of the information was erased.) and, finally, they watched a video that showed a cute baby.

In the first case, when the frustration was fake, 90% of participants did not smile. However, in the second case, 90% smiled despite being disappointed, and the third with the video of the baby smiled the most. The difference is that the smile of frustration is much more instantaneous than that of joy.

In addition, the muscles involved are different. In fact, the real smiles start in the muscles that raise the cheeks and wrinkle around the eyes.

“Laughter is extremely relaxing, it is a great meditation. If you can laugh totally, if you can laugh with totality, you will enter a space of no-mind and no-time. The mind logically lives from expectations; laughter is something that comes from beyond. “

Why we hide behind a smile

Behind a false smile you may find different motivations. One of the most common is the fear of showing our feelings when we are sad or feel bad. In these situations we feel vulnerable and the act of letting out our feelings and explaining them is more complicated to us than just simply smiling.

On other occasions, our sadness is hidden behind a smile in order to not hurt the other person. We do not realize that this fake smile betrays us and can harm both ourselves and the person we are smiling at when we are really sad.

The power of a sincere smile

From a very young age we learn the power that a smile can have. A baby interprets the smiles of their father or mother as a sign of confidence that makes things right or that there is no danger. In this regard, in 1957 an experiment in the United States where several babies were placed at the edge of a high transparent glass surface which is called a “visual cliff”.

“Life is full of loneliness, misery, suffering, sadness and yet, it ends too fast.”

The children had the feeling that if they moved through the transparent surface they would fall into the void. At the other extreme were their mothers, some smiling and others not. Those smiled were able to get their children to overcome their fear and cross the surface. Other children whose mothers did not smile, chose not to cross that area.

Moreover, among adult men and women, there is also an undeniable power derived from a smile. In fact, in 2001, a study found that people were 10% more likely to trust someone who smiles. And another study showed that women that smile increase their attractiveness to men by 40%.

Learn To Find Joy Each Day

“What it is happiness and how do we find it?” This is the question we spend our lives trying to answer. In this article we will help you … More

Certain friends in our lives help keep us from falling during our most complicated moments. Friends that offer us their time and affection…

Wellness
The Best Response to Cruelty Is Kindness

For various reasons, some people go through life thinking they benefit from the damage other people suffer, and so it makes…

Emotional responsibility includes being accountable for not only our actions and behaviors, but also our thoughts and our feelings. In short, our existence. Throughout our lives, the majority of the time that…

Wellness
Sisters Are United by the Heart

For sisters, time and distance don't matter. Those faces that share the same mannerisms and laughs will always look at each other with understanding,…

Wellness
How to Manage Your Emotions Well

Have you ever stopped to think about how you tend to react when you feel bad? Or if your behavior…