Sigmund Freud and Carl Jung both defined the world of psychology even though their theories differed. 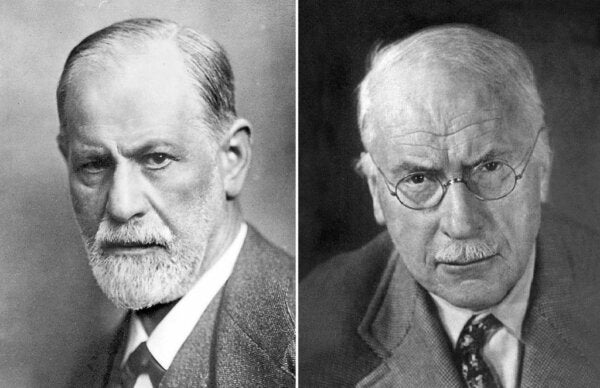 Thus, Jung became interested in Freud’s work. However, at a certain point, their theoretical positions followed different routes. In fact, Carl Jung was expelled from the International Psychoanalytical Association at that time. Thus, the existing controversy between Freud and Jung is of great importance. Especially for psychoanalysis researchers and other intellectual historians.

The controversy between Freud and Jung is a concrete event in the constellation of actions that shaped current psychoanalysis. Within this context, the rhetorical and legitimizing strategies carried out by Freud and the psychoanalytic movement in order to institute, perpetuate, and control psychoanalytic practice are of special importance. Furthermore, the segregation and expulsion of dissidents was a central issue in this.

The controversy between Sigmund Freud and Carl Jung

The strongest hypothesis about Freud’s tolerance for Jung’s clear and early dissent highlights the strategic role of the Swiss psychiatrist. Mainly in consolidating and spreading the incipient psychoanalytic movement.

Apparently, Freud had already declared the strategic importance for the survival of psychoanalysis years before. Thus, in May 1908, Sigmund Freud made a confession to Karl Abraham. He said it was “Only because of Jung’s appearance on the scene that psychoanalysis escaped the danger of becoming a Jewish national affair”.

The most complex period of the private relationship between Freud and Jung happened around 1912. Freud somehow tried to refute Jung’s theories, just as he did with Adler’s. This was a clear start to their controversy. Not agreeing with his theories, Freud pointed out Jung’s contributions as unnecessary. The clear feud between Freud and Jung notably affected psychoanalysis.

The reaction of Sigmund Freud to Carl Jung

In the first letter in which Jung systematically exposes his points of view regarding the symbolic character of the taboo of incest, Freud responded that he considered innovation as regressive and excessively Adlerian. Faced with this, Jung responded that he has sadly verified “what intense affective reasons contrary to my proposals arise in you” (McGuire & Sauerländer, 2012).

In this same reply, dated June 8, 1912, Jung mentioned his future conferences for America. Freud responded to Jung that his interpretations of the incest taboo and libido were incorrect.

Before this, Jung responded in a negative tone on July 18th. He told Freud that the success or failure regarding his negative judgment on innovation in the subject of libido and incest would be settled in the “success or failure of my own work”.

Freud interpreted the latter as “a formal renunciation of our hitherto friendly relations. I am sorry, not so much for personal reasons, but for the future of the Verein (association) and the cause of psychoanalysis”.

Four years later, in 1916, Jung published his work composed of studies on symbolism and libido. This work wasn’t well-received by Freud and his companions, just as expected.

The conferences in America

Another event that marked the differences between Jung and Freud happened during their conferences in America. These occurred during September 1912. Jung gave a series of lectures at Fordham University to which Freud objected.

“Naturally, I have also expressed my points of view, in divergent parts with respect to the opinions held up to now; I am particularly referring to libido theory. I have observed that my conception of psychoanalysis won many friends, who until now doubted the problem of sexuality in neurosis.”

However, Jung was quick to argue that he hoped Freud would gradually accept his innovations, given that they represented intellectual efforts that require an objective judgment.

Jung maintained that he didn’t identify Freud with a dogma. As he mentioned in his own conferences in 1912 in North America, he considered that his reformulations didn’t imply a division in the psychoanalytic movement. Mainly since “such earthquakes can only exist in matters of faith. But psychoanalysis is devoted to knowledge and its ever-changing formulations”.

Thus, both Freud and his companions in psychoanalysis such as Ferenczi started to badmouth Jung. They considered him an “incomprehensible mystic, an occultist, and a theopsychologist”. Faced with this and Freud’s subsequent devaluations of his work, Jung manifested:

“I am forced to the painful conclusion that the majority of psychoanalysts misuse psychoanalysis for the purpose of devaluing others and their progress by insinuations about complexes (as though that explained anything. A wretched theory!)”

In formal terms, Freud offered Jung a position as a collaborator in the new magazine he created. On December 3, 1912, Jung responded to this offer. He spoke of Freud’s fixation on the neurosis. Given this, Freud instructed him to “take more care of his own neurosis than that of his neighbor”.

Jung’s discontent with the Freudian attitude towards his innovations and those of other psychoanalysts is condensed in his December 18, 1912 letter:

“When you have completely freed yourself from complexes and no longer try to parent those whose weaknesses you constantly point out, and you pay attention to yourself, then I will agree to extirpate my sinful lack of unity in front of you once and for all.”

The end of a friendship

The correspondence between the two professionals began to wane from this moment on. Thus, the controversy between Freud and Jung became clearer. In 1913, the International Psychoanalytical Congress took place in Munich; both psychiatrists assisted.

Psychoanalytic historiography, with Freud at its foundations, generally supported Jung’s inappropriate and erratic behavior at this congress. However, other sources describe this congress as one that provided a different perspective.

Between October 1913 and April 1914, various psychoanalytic criticisms of Jung’s work came to light. It’s these criticisms and their violence that led to Carl Jung’s resignation as president of the International Psychoanalytical Association.

The relationship between Freud and Jung, as well as between them and the psychoanalytic movement, was problematic. The personal and professional relationship began as a formal relationship, evolving towards a paternalistic tutelage by Freud. Towards the end, Jung’s estrangement was evident.

Freud’s disappointment with Jung was soon tinged with intense emotions, which one can see clearly in their letters, thus creating the controversy between Freud and Jung discussed in this article. However, one can say that the relationship between these two psychiatrists was a great contribution to history.