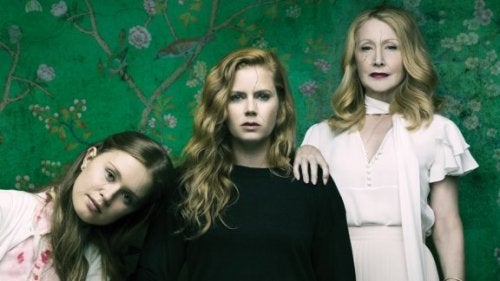 Sharp Objects: A journalist in search of answers

At the beginning of the show, Camille returns to her home town for the first time in 11 years. There, she’s reunited with her cold and manipulative mother, as well as her passive and unexpressive stepfather. As if that weren’t enough already, she has to deal with the painful memories of a sister who passed away and meets her half-sister for the first time. Her half-sister is a teenager just as manipulative and possessive as her mom.

Camille’s difficult childhood scarred her. Since childhood, she has cut herself on purpose. She hopes that the physical pain she inflicts on herself will provide some relief from her emotional pain. She also uses different types of drugs and consumes alcohol.

There are two types of self-destructive tendencies. One is direct and implies immediate self-harm. An individual engages in this behavior by hitting, cutting, or burning themselves. In the most extreme cases, this tendency could manifest itself in suicide. The other kind is indirect. These actions damage the body over time. Drug abuse, gambling, eating disorders, extreme sports, or unprotected sex are all examples of indirect self-destructive behavior.

Frederic Nauman argued that this type of behavior might be conscious or unconscious. Either way, it sabotages an individual’s chance at health and happiness.

In Sharp Objects, many of the characters are indirectly self-destructive. Camille’s mother and many of her childhood friends spend their days drinking a lot of alcohol. The parents and family members of the murder victims also turn to drugs and alcohol to deal with their loss.

On the other hand, Camille’s half-sister Amma practices all kinds of high-risk sports. She sneaks out at night to skate as fast as she can go in deserted and dark alleys all over town. She also participates in underground racing. Everything she does is to “kill time” and try to get her mother’s attention.

Camille is the character with evident direct self-destructive behavior. She used to cut herself in many places to write words that summarized her personality and depression. For example, certainty, shame, sick, invisible, wrong, etc. Over the course of the series, she continues to make small cuts on her fingers and thinks about the wounds that cover her body.

How to fight auto-destructive tendencies

These auto-destructive tendencies tend to reproduce themselves if they aren’t treated in time. What’s more, this type of behavior tends to become more frequent and intense with the stress and anxiety that people who practice self-harm feel. On the other hand, the support of family and friends can be very helpful. Likewise, professional help or support groups are always great options.

If you have self-destructive tendencies, here are some steps you can take to change your behavior:

These are some of the things you can do to try and address your self-destructive tendencies. They can help, but they might not be enough. That’s why we always recommend that you seek help from a licensed psychologist or psychiatrist.

Resilient people know that no one is immune to suffering, to adversity. They understand that when those moments of darkness…

They are only children, but they grow and mature faster than expected. Although their bodies may be small and still…

Psychology
What Positive People Do to Get Away from Negative Energy

We're surrounded by negative energy almost everywhere we go. People are always complaining, doing things to hurt themselves and others,…

Psychology
"Leisurephobia" - the Modern Fear of Having Free Time

The word "ociofobia" was created by Rafael Santandreu, a Spaniard psychologist. It translates loosely into "leisurephobia". It's one of those contemporary…