Self-Defense According to Eastern Philosophy

In martial arts, you learn to fight masterfully, but not to attack people. You learn for the sake of self-defense. In these disciplines, the best fight is the one that never happens. If it does, it's best for it to cause no destruction. 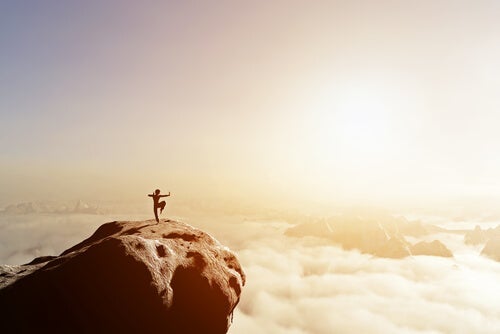 There are times in life where you need to be capable of self-defense. As peaceful as you may be, sooner or later you’ll find yourself in a conflict where someone tries to impose themselves on you or limit your ability to act in some way. Or maybe someone will offend you in some way and you’ll feel like you have to respond.

The most common response to aggression or insults is to attack back. Someone yells at you, so you yell too. Or, someone physically attacks you, and you respond in kind. This is the obvious reaction because there are no real guidelines in the Western world on how to defend yourself any other way.

“Masters and saints may appear as simpletons. Those who are pretentious declare to the world that they are just novice scholars or martial artists.”

Eastern philosophy, on the other hand, has given a lot of thought to war, combat, and conflict. Martial arts are just one product of that and self-defense is a central aspect of them. So, if you want to learn a bit about self-defense through the lens of martial arts, keep reading to discover some key points.

The philosophy behind self-defense

Martial artists avoid confrontation except as a last resort. That’s the basis of their strategy, both in terms of attack and defense. All of the tactics involved are about neutralizing your opponent or simply persuading them not to fight in the first place.

Anything you do or say in self-defense must obey the basic principles of not destroying, harming, or humiliating your opponent. Doing that would only increase their desire for violence. But remember that it isn’t the goal of martial arts; the goal is harmony.

Eastern philosophers knew that conflict always comes at a high cost. When harmony is broken, the best thing to do is find a way to bring it back, not intensify the problem or take it any farther. This is the first principle you need to have in mind for self-defense.

If you’re in a situation with physical aggression, Eastern philosophers recommended that you stay calm. That calmness should be present in your body too; it should look relaxed, not tense.

That’s something you can achieve with practice and breathing control. If you take slow, deep breaths, your muscles won’t tense up so much.

The art of defending yourself from physical attacks also involves the following actions:

This is a very simplified version of what martial arts say you should do in conflict. Every one of those points has a specific philosophy behind it and takes years of experience. But that doesn’t mean you can’t use them as a helpful framework, and as guidelines for your practice.

Physical attacks are also very similar to verbal attacks at their heart. They involve similar mechanisms and only differ at the tools. Thus, you can actually apply the same basic principles of physical self-defense as you can with verbal attacks.

Eastern philosophy says that you should never allow someone to verbally insult or humiliate you. But that doesn’t mean you should respond with the same tactics. There are other strategies you can use.

Many of them actually involve body language. You want your body to send a message of firmness and peace. Here are some tips on posture and actions:

If you’re understanding and compassionate enough towards the other person, you’ll know how to defend yourself. Of course, to do that you have to first know yourself, understand yourself, and know how to convey your own emotions.

If you find yourself in a verbal confrontation, these are the three strategies Eastern philosophy recommends:

How to react to fate's fickleness? Even though it often provides you with extraordinary moments, it also changes dramatically at…

Unfortunately, humans live in a complex world. One in which the idea that one shouldn't tolerate discomfort is utterly inconceivable.…

Childhood is a time for marveling at the incredible world we live in. Children endlessly absorb information. It's fascinating to…