Raise Your Children without Yelling: Raise them Responsibly and from the Heart 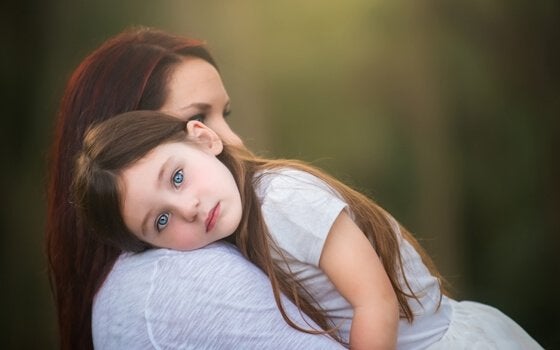 If you’re a parent or educator, raising children without yelling is best. Yelling isn’t educational or healthy for a child’s brain.

Far from resolving anything, what it does is activate two types of emotional responses: fear and/or rage. Let’s therefore learn to parent and discipline with empathy and responsibility. From the heart.

Parents and teachers are often tempted to raise their voices to stop disruptive or challenging behavior, tantrums that challenge our calm.

We can’t deny it, there are many times like this, times when fatigue mixes with stress and we reach our limit.

Giving in, resorting to yelling, is something that many people do. It’s not a parental taboo. In fact, some say shouting, like spanking, works, it’s useful.

Now, let’s look at this more deeply, because those who choose to raise children by shouting and sees these as appropriate behaviors have normalized them.

Maybe it’s how they were raised too. Now that they’re adults, they are unable to use other tools, other, more useful and respectful alternatives.

Raising your children without yelling is not only possible, it is necessary. Disciplining, correcting, guiding and teaching without resorting to shouting has a positive impact on the development of a child’s personality.

It’s an effective way of taking care of your emotions and self-esteem, setting an example. It shows them there’s another way to communicate. One that doesn’t hurt, one where we know how to understand and connect with real needs.

The neurological impact on a child’s brain

Something that we as parents and educators will have noticed on more than once is that sometimes we lack resources, strategies and alternatives. We know that shouting isn’t helpful and that you never get the result you expect.

What we get is fear and anger in a child’s eyes. Therefore we need to learn appropriate parenting methods without shouting, to raise and educate them positively and handle these situations with intelligence.

First, something that we shouldn’t lose sight of is the impact that shouting has on the human brain and on a child’s neurological development.

The act of “shouting” has a very specific purpose in our species, like any other: to warn of danger or risk. Our alarm system is activated and cortisol is released, the stress hormone that puts us in “fight or flight” mode.

In this way, a child who lives in an environment where there’s an abuse of yelling as a parenting strategy will suffer very specific neurological changes.

The hippocampus, the structure in the brain related to emotions and memory, will be smaller. Also the corpus callosum, the place where the two hemispheres of the brain come together, will get less blood flow, thus affecting a child’s emotional balance, their attention span and other cognitive processes …

Yelling is a form of abuse, an invisible weapon that cannot be seen or touched, but just as devastating in a child’s brain. This excessive, continual release of cortisol puts a child in a constant state of stress and alarm that nobody deserves.

Raise children without shouting or tears

Pablo is 12 isn’t doing very well in middle school. His parents now take him to a tutor where he gets after-school classes to reinforce various subjects, especially the most important ones.

He gets up every day at 8am and gets home at 9pm. This semester, Pablo has failed three classes: two math classes and English. Two less than last semester.

When he gets home with his grades, his father can’t help but yell at him. He reproaches Pablo’s laziness and all the money they invest in him “for nothing”. He says again, “you’ll never amount to anything.”

After the reprimand, Pablo locks himself in the room telling himself his efforts are worthless, that he wants to leave school and leave home as soon as possible, away from everything and everyone, especially his parents.

This situation, surely not uncommon, is a little example of what shouting and misguided expression at a given moment can lead to. However, let’s look in more detail at what something like this can do if it’s continual.

Children and adolescents interpret shouting as a way of expressing hatred, so if their parents address them in this way they will feel rejected, unloved and hated.

How can I raise my children without yelling?

Like we said, there are multiple alternatives to shouting. There are strategies that can help us build a more reflective dialogue, a positive foundation for a healthier bond with our children. Let’s look at some basic methods.

The adolescent used to parents telling him what to do all the time needs to be asked what he thinks. What does he feel? What’s going on? Someone listening to them from time to time can be a salve for this tricky stage, or any age for that matter.

To conclude, raising children without shouting is most of all a personal choice that requires the will and daily effort of the whole family. It should also be said that there is no magic key that will work in all situations and with all children.

However, there are some things that are useful in most situations: spending quality time together, giving understandable orders, establishing ourselves as figures of unconditional support or encouraging them to take on responsibilities that are within their reach at their age.

Discipline and Love: How to Educate a Child
Many disruptive behaviors are caused by the child feeling ignored, with no own thoughts and with one sole motive to act: obedience. Read more »
Link copied!
Interesting Articles
Psychology
Donald Winnicott and His Theory about the False Self

There are people who set themselves apart through their resilience. It is precisely these people who have an ability to stay afloat…

Article 25.2 of the Spanish Constitution touches on prisoner rehabilitation and that the penalties imposed for committing a crime must…

Carl Gustav Jung is perhaps the most famous dissident of classic psychoanalysis. He strayed away from Freudian ideas and explored ancestral roots and the collective unconscious and had many revolutionary ideas. One…