Purkinje Neurons: The Enigmatic Cells of the Cerebellar Cortex

According to a group of researchers at Harvard University, Purkinje neurons could be linked to the onset of autism. This discovery may open the door to the development of potential new treatment options in the future. 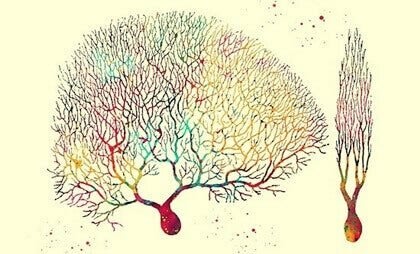 Under a microscope, Purkinje neurons look almost like trees. Neuroscience experts have often described them as some of the most challenging and enigmatic cells in the human body. We know, for example, that they’re present in the cerebellum, as well as the heart. In addition, some recent studies indicate that there could also be a link between Purkinje cells and the development of autism spectrum disorder (ASD).

The neurological universe is almost as fascinating as the cosmos itself. But it isn’t just their unusual shape and size that makes these cells so striking. Believe it or not, Purkinje cells receive up to ten times more connections than any other neuron.

Scientists have been studying these structures for years. Unlike other inhibitory neurons, they also have the ability to “switch off” cells outside the cerebellum. In fact, their electrophysiological activity is so unique that it may help in the development of new treatments and approaches for different conditions.

However, this kind of research takes time. Universities such as the University of Tokyo have been conducting laboratory studies on zebrafish for years, trying to understand its different functions and the potential implications it may have in the onset of certain neurological disorders.

“Instead of reality being passively recorded by the brain, it’s actively constructed by it.”

Purkinje neurons: what are they and where are they located?

Purkinje neurons are a type of GABAergic brain cell, which means that they have an inhibitory function. There are approximately 30 million of these neurons in the cerebellum, and as many in the heart muscle. In fact, the large number of Purkinje fibers in the heart allow it to produce and transmit electrical impulses.

These cells were first discovered by Jan Evangelista Purkyně. Purkyně was a neurologist at the University of Wrocław, in Prussia. In 1832, he was able to observe them for the first time under a type of achromatic microscope. Five years later, he presented his findings to the scientific community in former Bohemia, now the Czech Republic.

Years later, Camillo Golgi, from the University of Pavia in Italy, attempted to examine Purkinje cells by staining them with silver nitrate, hoping to gain further insight into how they work. Santiago Ramón y Cajal, from the University of Barcelona, also conducted his own studies on the topic. In 1906, both scientists won the Nobel Prize in Medicine for their contributions to understanding the structure of the nervous system.

What are Purkinje cells?

As we’ve already mentioned, Purkinje cells are inhibitory neurons. These neurons are incredibly large and receive a staggering number of connections. Dr. Thomas Launey, director of the molecular research unit at the Riken Institute in Japan, is one of the leading experts on these brain structures.

Purkinje cells play an important role in motor and learning processes. In recent years, there have been a number of important discoveries relating to the functions of the cerebellum, where these cells will undoubtedly be very important.

In early 2018, the scientific journal Molecular Psychiatry published an interesting study that was conducted at Harvard Medical School. According to this research, a dysfunction of the Purkinje cells of the cerebellum could be involved in the development of autism spectrum disorder (ASD). It’s just one of many hypotheses that emerged in recent years.

The cause of this alteration is genetic, and is known as tuberous sclerosis complex (TSC). Researchers have also observed that many patients with autism have a very low number of Purkinje neurons. This often results in problems regulating behavior, motor control, and constant hyperstimulation, as well as social deficits.

Currently, scientists are trying to create Purkinje neurons from stem cells. A type of protein is also being developed, which could help reactivate the functionality and production of this crucial structure in children. This open up many possibilities for the future, and we look forward to seeing what new information will come to light over the coming years.

Von Economo Neurons: Functions and Characteristics
Von Economo neurons have been found to be crucial in making quick intuitive judgments about many of the things that surround us in our daily lives. Read more »
Link copied!
Interesting Articles
Psychopharmacology
Learn All about Antipsychotics

Brain
The Importance of Your Brain's Unique Neural Signatures