Pick's Disease and the Inappropriate Behaviors It Causes

Pick's disease can turn a respectful person into a rude and brazen one. It's a rare degenerative disease that can appear between the ages of 40 and 50. We'll analyze it in this article. 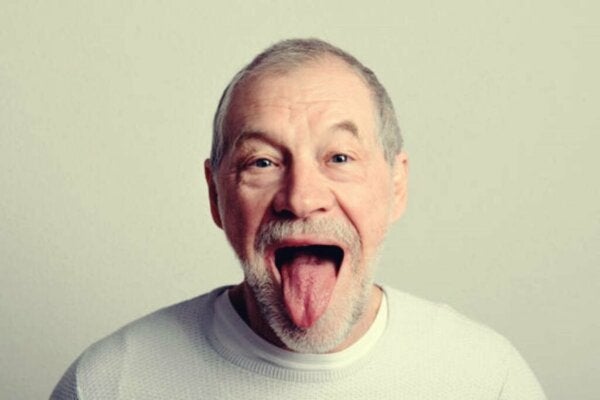 Insults, unexpected and rude comments, touching others, harassing behaviors, and even aggression. The families of Pick’s disease patients suffer unspeakable stress with this unique type of dementia. Few phenomena are more shocking than seeing such a radical change in a person so close to them and how they’re suddenly incapable of respecting basic social norms.

Pick’s disease isn’t as common a neurodegenerative disease as Alzheimer’s. In fact, it affects just under 0.02% of the population (1 in 5500 in the United States, for example). However, its consequences are both severe and lethal. In addition to that, it appears early, on average between the ages of 50 and 53.

Nevertheless, experts have even diagnosed this neurological disease in young people barely in their twenties. Tragically, it’s a disease with quite a short life expectancy.

Sadly, there’s no cure, and treatment isn’t able to stop these radical behavior and personality changes. Therefore, it’s extremely complicated and painful to care for patients with this disease.

Many relatives end up being victims of both physical and verbal aggression from a father, mother, or brother who used to show them affection and respect.

Let’s learn a little more about this type of dementia.

When we talk about dementia, the usual stereotype is Alzheimer’s disease. Moreover, we often relate these neurodegenerative diseases to very specific symptoms: confusion, memory loss, and orientation problems.

However, Pick’s disease differs from Alzheimer’s in several distinctive ways. It affects other brain areas and also has unique biochemical characteristics. Likewise, the first symptom it causes is personality changes.

It’s a severe brain condition that consists of three very specific phases and ends, sadly, with the death of the patient due to progressive degeneration.

As of yet, experts still don’t know what causes this disease. The changes focus exclusively on the frontal and temporal lobes, thus causing frontotemporal dementia. Patients with Pick’s disease show peculiarities that were discovered by psychiatrist Arnold Pick in Prague in 1892.

What are the symptoms of Pick’s disease?

This type of dementia in the frontal areas produces a rapid deterioration in social abilities. A person ends up completely losing their capacity to accept and carry out conventional norms.

Is there a treatment for this type of dementia?

We know that the earlier this disease begins, the worse its progression and the sooner the patient dies. It’s an extremely aggressive form of dementia that severely impacts the people around the patient. The family witnesses how their loved one suddenly becomes a completely different person.

It’s also a disease that appears in people who are still young and who, on average, will die within six or seven years after the first symptoms appear. There’s no cure and the only treatment that exists is for the emotional aspects, such as depression and emotional ups and downs.

The most complex aspect of Pick’s disease is its extremely rapid progression and the constant changes the patient suffers. This makes it very difficult to provide a quick medical response to prevent these alterations. However, we know that, on average, this disease consists of three main phases:

Last but not least, in these situations, it’s very important to provide comprehensive assistance to the family. The emotional impact is immense. Caring for a Pick’s patient isn’t easy, and they must deal with their hypersexuality and aggressiveness. The family suffers tremendously and must receive constant social and psychological support.