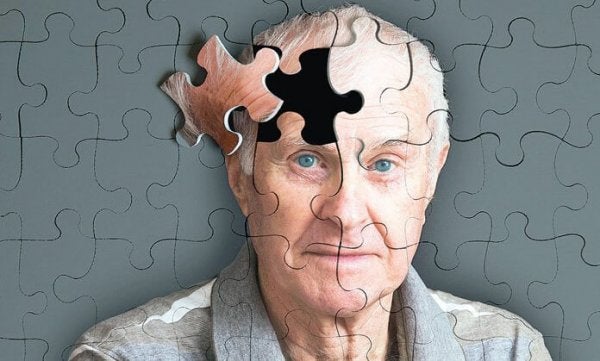 Alzheimer’s is a type of dementia that becomes evident after the age of 60. Unfortunately, even with today’s scientific resources, its progress is unstoppable. Its development at the beginning is usually slow. In the early stages of this condition, certain parts of the brain that control thought, memory and language begin to be affected. People start to have problems remembering certain things and this eventually leads to them having more serious memory losses, to the point where they don’t even recognize their own relatives. It is then when they become completely dependent on other people. Read on to discover five warning signs of Alzheimer’s that may help you detect it in time and delay its development.

The risk of Alzheimer’s is higher if there are people in the family who have suffered this disease.

1. Warning signs of Alzheimer’s : The performance of daily tasks is more difficult

It is normal that from time to time we lock ourselves out, forget to pay a bill or forget other day to day activities. However, people who are beginning to succumb to Alzheimer’s disease do this so much more frequently and, at times, it may pose a danger.

For example, they might leave the gas on without realizing it, with the risk that this entails. In the same way, they may leave a cake in the oven and forget to take it out. Sometimes, these people also forget how to prepare certain simple meals and even how to serve them. They don’t remember how to lay out the dishes, the napkins, the cutlery…

Bit by bit, Alzheimer’s disease is causing certain limitations that prevent the person from carrying out the smallest and most simple daily tasks

From time to time we all experience the frustration of having things on the tip of our tongue. But this daily occurrence, which indicates there is a problem in the recovery of  certain information, may have a more serious significance in some people. It may be a sign that they are starting to suffer from Alzheimer’s.

People who suffer from this disorder have serious difficulties in finding the right word when they are trying to communicate something. Sometimes, they even find it difficult to complete a sentence or explain what they mean. This happens because they aren’t able to replace the word they have “on the tip of their tongue” with another suitable word, and they can’t explain what they mean by using other words.

Due to this disease, people with Alzheimer’s begin to have increasingly noticeable problems in being able to communicate. Their vocabulary is impaired and they forget very simple words that they would normally use on a daily basis, words without which it is difficult for them to express themselves in a coherent and understandable way.

3. Disorientation in places that they know well

One of the most key alarm signals that Alzheimer’s exhibits is disorientation. People who suffer from it suddenly get lost when they go into town and even in their own neighbourhoods. Sometimes, they may even suffer brief episodes of disorientation within their own home.

Suddenly they don’t know where the toilet is or they don’t recognize their own house. Experiencing this type of situation can cause them serious bouts of stress and anxiety. We should take these incidents into account, however brief they may be, since they may indicate that the person has Alzheimer’s.

If we leave our children with grandpa or grandma and, while they are taking a bath, their grandparents completely forget about them, then this could be a clear sign of the onset of Alzheimer’s. A temporary oversight is normal, but people with Alzheimer’s completely forget about their responsibilities and even have trouble remembering when they are told what happened.

This also happens to them when they are looking for things. People with Alzheimer’s lose objects very easily, and are prone to putting things in the wrong places,  putting the sugar in the oven or refrigerator for example. When they go and look for it in the place where it should be, they can’t find it and forget where they had put it. They are also prone to forgetting what they were doing. If they are cleaning, for example, and looking for the broom to sweep the floor, they may forget they were cleaning and start doing something completely different.

People with Alzheimer’s disease have very sudden mood swings for no apparent reason. They can suddenly start crying after being completely calm beforehand, or they could get angry when they were smiling happily a moment before. But, in addition to all this, there is a change that leaves no doubts that they are suffering from this illness: they lose the initiative to do things. Forgetting what they were doing, disorientation and the mood changes they suffer drain them in such a way that they get easily tired and become very passive carrying out their tasks.

People with Alzheimer’s need someone to motivate them to do things, like going out for a walk, meeting other people, doing housework, cleaning up … because this disease cancels all your initiative.

These are some warning signs that we can take into account when we suspect possible dementia. It is necessary to emphasize that at the beginning they can be very subtle, and can be seen as normal things that happen to all of us and not taken into consideration. However, over time they will become more and more evident, clear and frequent.

If we detect these signs when Alzheimer’s is in its early stages then this will make the treatment more effective, and delay the onset of more serious symptoms of the disease. This will allow the patient to maintain their independence for longer and their quality of life will not be diminished so quickly.

What Happens to My Brain When I Have Alzheimer’s?
Sad as it is to say, we are all used to hearing about different kinds of dementia, but we often do not receive clear explanations Read more »
Link copied!
Interesting Articles
Sports Psychology
Team Sports and Personal Development: How Are They Related?

You decide if you live or just survive. If you let yourself go with the flow, going through life carefully…