The concrete operational stage is the part of Piaget's developmental theory that explains the formation of logical thinking in children. 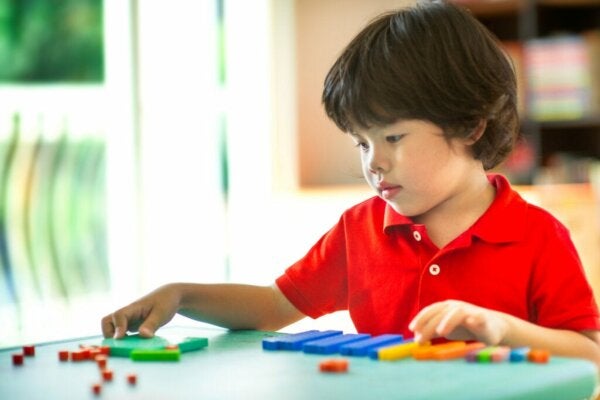 The concrete operational stage is part of the theory of cognitive development proposed by Jean Piaget, whose discoveries are fundamental for positive psychology. According to this theory, child thinking has unique characteristics and these vary according to the stage of maturity and interaction with the environment.

Today’s article will discuss how the logic of a child who’s beginning the concrete operational stage works. What’s their perspective of the world? What’s it like? What problems can they solve?

Swiss psychologist Jean Piaget completely revolutionized the theories of child development and the concept of intelligence that had existed until then. His theory of development questioned whether children were less competent thinkers than adults. Also, whether they were at the mercy of their environment as people believed up until the 1940s.

Thus, Piaget demonstrated through ingenious experiments that children’s ways of thinking aren’t inferior to those of adults, only different. In his theory of cognitive development, he described infants as “little scientists”. He observed that they actively operate with the environment, experiment, and modify their thinking according to their findings.

According to Piaget, children construct a series of mental representations of the world in accordance with their stage of maturity. This is because they observe the discrepancies between their mental map and the reality they perceive as they interact with their environment. Thus, it allows them to progressively modify this conception.

All children go through these stages in the same order towards a way of thinking that evolves in complexity and abstraction.

According to Piaget’s theory, the concrete operational stage begins between the ages of seven and eleven. However, the author recognizes the existence of individual and cultural variability. This third stage of the developmental theory is fundamental in that it’s the beginning of logical or operational thinking in the child.

In the concrete operational stage, a child has acquired sufficient biological maturity to begin to operate through rules. In other words, the main characteristic of this stage is the development of logical thinking. One that no longer requires so much physical manipulation. Moreover, it allows them flexible reflection, the kind that isn’t only based on the appearance of objects.

According to Piaget’s experiments, a child who’s at the concrete operational stage would be able to mentally order a series of sticks by size. In fact, they wouldn’t need to physically manipulate them at all.

According to Piaget’s theory of cognitive development, a child in the concrete operational stage will acquire three fundamental operations described below:

The concrete operational stage and the practical child

Piaget’s theory of cognitive development built the foundation for today’s evolutionary psychology. For the first time, it proposed a perspective of children’s unique thinking. In addition, it described the processes of biological maturation. It described the relationship with the environment that underlies the development of mental processes as well.

The concrete operational is the third stage of the phases described by Piagetian’s theories. In this fundamental stage, children acquire logical notions and enjoy more flexible thinking. The main operations acquired in this stage are serialization, conservation, and classification. These three skills allow them to solve problems in a more systematic way.

Finally, people usually describe this stage as the birth of “the practical child”. Mainly, because it surpasses the previous stages related to learning. It does so through activity and intuition. A practical child no longer learns by trial and error but acquires scientific logic.

Learning about Cognitive Development in Children through the Eyes of Piaget
Jean Piaget was one of the leading minds in the study of children's cognitive development. Read on and find out if today's theories still agree with his. Read more »

When people talk about the way babies process information, they always dedicate a good part of it to infant vision.…