There are certain similarities and differences between the Neanderthal brain and homo sapiens'. For one, the former died out and the latter is still around. 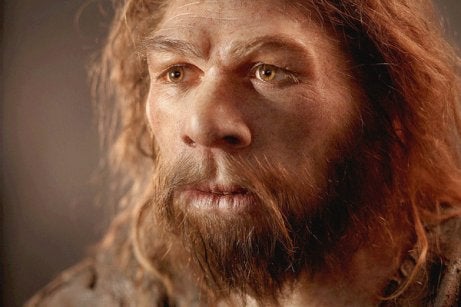 Today’s article is about the Neanderthal brain. Homo neanderthalensis is an extinct human species that populated the Earth at the same time as modern humans. They thrived throughout most of the second half of the Pleistocene, between 230,000 and 28,000 years ago. Then, they spread throughout Europe, the Middle East, and Central Asia.

Paleontological studies indicate that Neanderthals and Homo sapiens have a common origin, so both shared some morphological traits and had similar cognitive abilities. Furthermore, there’s also evidence that both species interbred at some point throughout history and left hybrid descendants behind. Thus, 2% of the current human genome is Neanderthal.

Continue reading to learn about their morphological characteristics, mainly their brain and what was its role in their extinction.

Morphology of the Neanderthal brain

Anatomically, Neanderthals were stronger than Homo sapiens and had wider chests and hips. They were a lot more robust, though with shorter limbs. The main characteristics of their skulls were its double superciliary arch, narrow forehead, small chin, and a somewhat larger cranial capacity.

These cranial features provide clues to what their face may have looked like. Scientists think they had a prominent nose, hollow cheekbones, and a somewhat protruding upper jaw. One can explain the nose as an adaptive enhancement with which to withstand the harsh freezing temperature of their era.

Neanderthals were omnivores, just as modern humans are. Depending on their habitat, they subsisted from a wide variety of foods that ranged from large mammals to fish and shellfish. Of course, they also gathered edible plants and seeds.

Furthermore, the anatomical studies of Neanderthal remains give clues about the possibility that they had an articulated language. In addition, the many excavations report that this species had a complex organizational capacity, worshiped their dead, cared for their sick, manufactured tools, and even created art.

The Neanderthal brain is larger than those of their modern counterparts. Furthermore, their brains grew at a slower rate. This is very peculiar because it takes a lot of energy to maintain a big brain. Therefore, they needed many nutrients and required a lot of care during childhood in order to ensure its development.

This means that, despite the difference in sizes, the human brain matured in a similar way in both species. Thus, the growth pattern between both came from a common ancestor. This characteristic is very important for the adaptation of the genus Homo. Because a longer development leads to a bigger brain and, therefore, more efficient mental capacities.

This similarity between the development of the brains of both species came about thanks to the careful analysis of the remains of a Neanderthal infant. Anthropologists found them in the Sidrón Cave in Asturias, Spain, and they think it’s about 49,000 years old.

Another difference between the brains of these two species is the shape. Homo sapiens’ brain is proportionally spherical like a soccer ball, while the Neanderthal brain is somewhat more elongated, like a rugby ball. The consequences of this anatomical difference in the shape of the brain are unknown until now.

The Neanderthal brain may be large but their cerebellum is smaller than the brain of modern humans. This tiny detail could make a big difference between both species. This is because the cerebellum is a very important part of the brain. Also, because it regulates cognitive abilities, such as concentration, memorization, cognitive flexibility, and language comprehension and production.

In contrast, the occipital lobe of Neanderthals was larger than ancient Homo sapiens’. Thus, Neanderthals might’ve had more powerful vision. This is because this region of the brain is responsible for processing the images you receive.

The extinction of Neanderthals

This is still a mystery and the most important factors are the expansion of Homo sapiens in Eurasia. Also, the gradual changes in climate.

The analysis of the Neanderthal continues in various sites, from Russia to Spain. Scientists revealed that this Homo species became extinct 40,000 years ago. The Iberian Peninsula was their last habitat.

Some researchers consider that the Neanderthal brain could be one of the many reasons for their extinction, specifically its reduced cerebellum. Unlike Homo sapiens, Neanderthals had less cognitive and social capacity. Thus, they didn’t adapt as easily to changes in the environment. In contrast, the other human species had a better chance of survival due to the larger size of their cerebellum.

5 Historical Novels that Will Broaden Your Horizons
Historical novels are capable of transporting us to another time and place. A good historical novel shows past realities. Read more »
Link copied!
Interesting Articles
Brain
The Cerebellum and Divergent Thinking