Peter Pan, the Story of the Boy Who Didn't Want to Grow Up 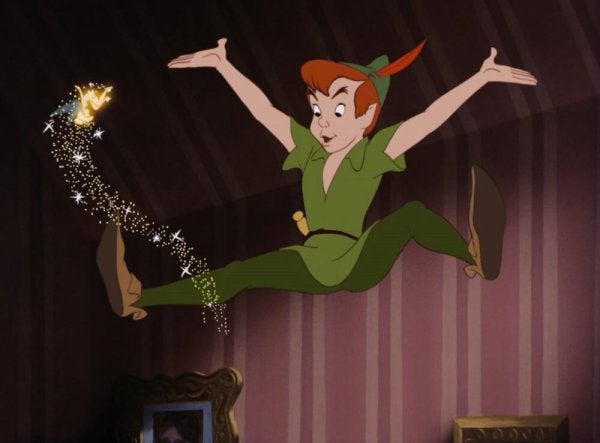 Peter Pan is a well-known British play written by James M. Barrie. He wrote it for young children and debuted in London in 1904. It has a bit of a history. Before becoming a theatrical play, the character of Peter Pan appears in another Barrie novel. In this first version, Peter lived in London and all the children were half-bird, which is why he could fly.

Barrie would keep refining his novel and adding new things which we can see in the Peter Pan play. Among the new features, one of the most recognizable is the fairy dust used for flying. He had to include this because of the accidents that were occurring in the city. These involved children who thought they could fly.

Barrie was inspired by the Kensington Gardens in Hyde Park. This is where he would spend a lot of his time. The family Llewelyn Davies used to go there frequently. Their children inspired the story. They would often play in the gardens.

If we travel to London and visit Hyde Park, we will find the statue of Peter Pan there. This statue is not there by coincidence. It was placed there by the author of the play himself in 1912. He did it as a gift to the children of London and placed it where Peter Pan landed in the first version of the play. Also, Barrie decided to grant the rights to the play to the Great Ormond Street Children’s Hospital in London.

Without a doubt, the legacy of Peter Pan seems infinite. Given that there are countless theater and movie adaptations, we’re going to focus on the most emblematic ones today. This is the 1953 Disney adaptation.

Neverland is a remote island. You can only get there by flying through the highest part of the sky. After that, you must “turn at the second star on the right and fly all the way ’til morning”. It’s a place where laws don’t exist and the children who inhabit it have no responsibilities. They spend most of their time playing and having fun.

This island might remind you, in part, of Pleasure Island from Pinocchio. In both movies, the children who live on the island don’t want to have any responsibilities or grow up. They are remote places that adults can’t enter and where they can do whatever they like. Nevertheless, as opposed to in Pinocchio, the children who live in Neverland are called the Lost Boys. These children are the ones no one has claimed.

Magical creatures live on the island, such as fairies and mermaids, as well as Indians and pirates. The more time they spend in Neverland, the harder it is to leave. It also becomes harder to get their memories and their lives back.

You can see Neverland as an idyllic place where everything is possible. It’s a place full of adventures and fun. Nevertheless, it’s also a trap. The children can’t grow up there. They never mature and, as a consequence, they only have short-term memory.

“Second star to the right and straight on ’til morning.”

Wendy lives with her family in London until Peter Pan appears in her house one night. He takes Wendy and her brothers to Neverland.

At first, Wendy is just like the others and enjoys Neverland. She becomes excited at the idea of being able to fly and visit Neverland. That’s why she accepts and starts her journey with Peter.

Peter and the Lost Boys start to see Wendy as a mother figure. She takes care of them and tells them stories. In Neverland, there are no girls and they lack any type of protection or motherly figure. That’s why Wendy takes on this role.

Little by little, she starts to become aware of the importance of growing up for her own development and she comes to accept it. She becomes a sort of mother for the Lost Boys. Finally, she convinces herself that she has to grow up.

Wendy is the feminine character who’s the opposite of Peter. Wendy is a responsible girl who takes care of her younger brothers. She aspires to become an adult woman. Wendy is rational and complements Peter.

“If you knew how marvelous a mother’s love is, you wouldn’t be afraid.”

Peter Pan, the boy who didn’t want to grow up

Peter Pan is the protagonist. He’s a boy who lives in Neverland and doesn’t remember anything about his past. He’s the leader of the Lost Boys. He plays this role because, even in a world without rules, a leader is required. In this case, the responsibility falls upon Peter.

Aside from that, Peter is the chosen one to save Neverland. He is always accompanied by the Lost Boys. He is also accompanied by Tinkerbell, a small fairy who is very jealous and possessive.

In reality, Peter is a boy who’s afraid of going up. He’s afraid of facing his problems and being mature. Peter seems very brave when he laughs at Captain Hook. He mocks him and drives him crazy. But he’s not brave enough to confront the real world and maturity.

He has a wild imagination because he can fly. Peter is joyful and sees no danger in anything. He has amazing leadership skills. Also, he’s the one who convinces Wendy and her brothers to visit Neverland.

When he tells the boys that their thoughts will make them fly, it shows his great leadership and strong conviction. He tells them that all they have to do is believe in themselves. They need to believe that it’s possible and think happy thoughts. In this way, and with the help of the fairy dust, they will be able to fly like Peter.

Flying is closely related to imagination and freedom. Humanity seems to have always wanted to fly like birds, perhaps because we consider it to be something impossible and nearly divine. When we’re children, it seems that one of our greatest desires is, precisely, to be able to fly. Because of that, we see that Peter, a pure boy unaltered by the world of adults, lets his imagination run wild and flies.

The imagination children have is truly powerful and fascinating. However, because of adult intervention, it’s sometimes limited. That’s why the Lost Boys and Peter Pan have an imagination that’s totally uncommon. It hasn’t been changed by any adult in a long time.

Peter Pan has a very charismatic personality. But he also proves to be a boy who is too careless and absent-minded and he comes to lose even his own shadow. This loss of his shadow also represents a loss of identity. It shows he has a problem accepting himself. It’s a type of unfolding of his personality.

Our shadow is like a mirror where we recognize ourselves. It’s something that is tied to us and belongs to us. But Peter constantly loses it. That is to say, he loses himself. Peter hides from his shadow. He can’t control it. This is because he runs from what he fears the most: growing up.

This play has given way to multiple interpretations and an endless supply of adaptations. But it has also served as a name for the so-called Peter Pan syndrome. People with this condition don’t want to grow up or mature. It has also provided the name for the Wendy Syndrome. These are people who are obsessed with pleasing others and have a deep-seated fear of rejection. Without a doubt, Peter Pan is one of the most emblematic plays of the United Kingdom.

The Difference Between Fantasy and Desire
Fantasy allows us to construct parallel worlds, impossible creatures, and magnificent stories like the ones we see in movies. Read more »