The Empathetic Brain: The Power of Human Connection 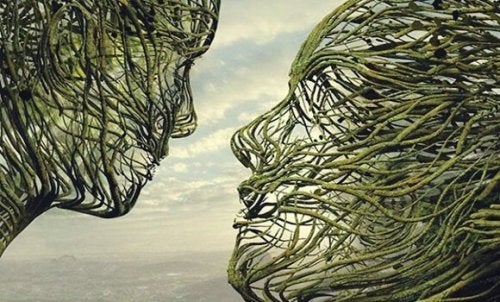 The empathetic brain programs us to be aware of the emotions and needs of other people. This is the evolutionary result of our socialization, a link that connects us to others so we can live in harmony. This awareness allows us to solve conflicts and guarantee our survival. Empathy is (or should be) the ability that guarantees our well-being.

We say “should be” for a very specific reason. Most of us know that empathy doesn’t guarantee humanitarian action. People are able to intuit and read other people’s emotions, and that’s really wonderful. There’s no doubt about that. We can tell who is suffering, we pick up on fear, and we can see the anxiety in other people’s faces. However, putting ourselves in someone else’s shoes doesn’t necessarily lead to the next step. We don’t always try to help.

“If you can’t have empathy and have effective relationships, then no matter how smart you are, you are not going to get very far.”

So, as well-known neurologists like Christian Keysers (from the Netherlands Institute for Neuroscience) explains, we still don’t know a lot about what we call the empathetic brain. Giacomo Rizzolatti’s discovery of mirror neurons in the late 90s made us believe for a moment that humans had arrived at another stage of evolution. Many people wanted to baptize us as homo empathicus.

Nevertheless, our behavior continues to be quite individualistic. Empathy leads us to connect with others and feel other’s emotions as our own. It gives us an extraordinary power, and we know this. In spite of that, however, we don’t use it to its full potential. As some scientists point out, we lack a genuine commitment to empathy. It isn’t enough to feel it, you have to use it. Let’s take a closer look at this idea.

The Empathetic Brain and its Purpose.

Ortega y Gasset said it best. Without other people, without “the other”, human beings wouldn’t be able to understand each other. Nor would they understand the concept of society. Man, he said, appears in sociability as the other, alternating with the one and, at the same time, with the reciprocate. This idea, that seems like a word game, makes up a reality that goes beyond philosophy. It’s a concept that encompasses psychology and neurology as well.

Mirror neurons, just like Dr. Keysers says, are what made up our idea of civilization.  They did that by being aware of the other. This other person that I observe and imitate. This other person in which I see a reflection of myself. The empathetic brain allows us not only to understand the point of view of the person in front of us. It also helps us anticipate intentions or needs. That is because we see ourselves reflected in others. For our brains, “others” are also extensions of ourselves.

You might be asking yourself what is the real purpose of empathy. There isn’t a definite answer to that question. We know that empathy is the ability that allows us to connect with other people in an important way. However, well-known behavioral neurologists like Vilayunur Ramachandran point out that the purpose of empathy isn’t always well-being in others. Human beings don’t always seek to help or take humanitarian action.

That’s because empathy isn’t a synonym of sympathy. So often, as in many social situations, we have other interests.

It’s powerful to be able to see things from the perspective of others. Seeing the world through other people’s eyes is a powerful weapon. It means you can build very complete mental maps that tell you, for example, if the person in front of you has bad intentions. What’s more, we can even anticipate other people’s reactions. We can use weaknesses in our favor to manipulate people. We have the capacity to play with other’s emotions for our own benefit.

Encouraging Empathy to Advance as a Species

Doctor Ramachandran reminds us that mirror neurons mean that our species made an incredible genetic leap. It’s true that other animals have empathetic abilities. However, in humans, these specialized cells imply an incredible advance. They favored the genesis of culture, society, and civilization.

Our awareness grew, our thoughts became more abstract, and the way we related to each other became more sophisticated. Cruel and violent at times, yes, but also more human. Oriented towards promoting well-being, order, and balance. The empathetic brain is the essence of our social relationships and our learning. It allows us to move in the appropriate direction, little by little.

Now, just as we indicated above, empathy doesn’t always imply action. Every person shows different levels of empathy. Mirror neurons don’t work the same in all human beings. Everything affects your social interaction and ability to solve problems. It also affects how well you get along with others. In fact, some scientists point out that mirror neurons are evolving, and so their power will advance with each generation.

Who knows, maybe someday these neurons will help us truly achieve peace. Maybe they will help us facilitate a more harmonious, balanced, and respectful society.

How to Train Your Brain to Be More Creative
Are you someone who believes that being more creative is overrated? Or do you think that humanity needs great ideas? Read more »
Link copied!
Interesting Articles
Psychology
Emotional Blackmail and How it Harms our Kids

Psychology
A Victim's Power of Resilience

Psychology
Our Body Talks To Us Through Pain and Sickness

Being connected to ourselves means understanding the signs our bodies send us. Our body talks to us through pain and sickness…

Psychology
It's Not Selfish to Think of Yourself