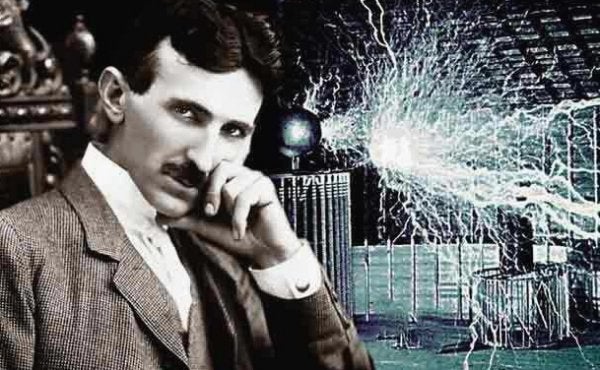 It’s easy to say that Nikola Tesla was the genius who illuminated the world. To imagine a world without him, all you have to do is turn off the light. However, to complete the character, you have to add the solitude and misunderstanding that often accompany great minds. Always complex, always fascinating.

One of the best know quotes from Tesla is one that was immortalized by the journalists of his time. It serves to outline a little more his vehement and always “gimmicky” style: “the present is yours, but the future is mine.”

“If I were lucky enough to achieve some of my ideals, it would be in the name of humanity.”

Perhaps he has a point. There are many who say that without him, our world would look more like the silent forest of Sleeping Beauty. A dark land, no radio, no television, no big industries or the never-ending hum of our modern cities.

It is Tesla we have to thank for the induction coil that ushered in the era of radio. He was also the architect of the transmission system that transports electrical energy to our houses, the remote control, the wireless telegraph, x-rays, and MRI. Another of his engineering dreams that eventually failed and was forgotten was the “Wardenclyffe” project. Its goal was to provide free wireless power to the whole world.

For many, this modern Prometheus of Serbian origin fell into oblivion because he tried to face the power of the industry of the time and tried to make its services more accessible.

Now, something we don’t talk about so often is Tesla’s personality. His psychology and the person behind behind the genius. Come with us and learn a little more about this remarkable historical figure.

Creativity and discipline: the complex mind of Nikola Tesla

There are several books that delve into the deeper universe of Nikola Tesla. Lightning, by Jean Echenoz is one of them. As is Nikola Tesla, personality and neurosis, by Serbian doctor Zarko Trebjesanin.

Tesla was always a bright person with a high IQ. His genius was nourished by something he began practicing from an early age: stubborn, obstinate discipline.

“There is no emotion more intense than seeing an invention work, and that emotion makes you forget everything: eating, sleeping. . .”

When an idea came into his mind, he didn’t let it go until it was fully formed or totally discarded. We know that he slept little and ate less. Also, since early on in his life he believed creativity demanded rigid rules, concrete schedules, and regulated emotions.

His science had a will of iron, to the point that he wanted to become an ascetic. He wanted to avoid any “sentimental” relationships. According to him, this type of relationship would make him lose objectivity in his creative work.

This was, undoubtedly, something he regretted later. In some interviews he even talked about his loneliness. He admitted that creativity takes passion, but that his hungry mind was also one of his greatest enemies. He was always full of ideas. Complex projects assailed him like storms and he could do nothing but obey their lightning-like force.

Nikola Tesla came to New York in the year 1885. He took with him only a notebook full of calculations, a mind full of ideas, a few poems and four cents in his pocket. However, he knew very well what he wanted to achieve.

Just a year later, he had already sold a patent for the alternating current (AC) motor to George Westinghouse. In addition, he was immersed in what was known as the “war of the currents” with his archenemy, Thomas Edison.

Unfortunately, many of Tesla’s ideas did not come to fruition. He never saw the world connected with electricity and invisible systems, at least not the way he had hoped. He stumbled over two great rivals: an iron system and policy that did not harmonize with Tesla’s “risky” ideas. In addition, he suffered from obsessive-compulsive disorder, which took away his energy and health at the end of his life.

The final years of Tesla’s life were especially hard. His obsessive-compulsive disorder took over many of his daily routines. He lived in hotels, where he always asked for 18 towels.  He rarely ate but when he did, he asked the staff to place 18 napkins on the table.

“Life is, and will continue to be, an equation that is impossible to solve but full of factors that we do know.”

Tesla always stayed in room 207, because this number is divisible by 3. His strange obsession with the number 3 and the idea of giving free wireless energy to the world stole his health and balance. The demands he placed upon himself were so high that his neurosis escalated. Sounds would cause him pain; he became hypersensitive. In addition, he ran out of money because he didn’t have any business sense or ambition.

He sold all his patents and died in the most extreme poverty. He left behind all kinds of works and documents that others used to get rich. Today, Tesla’s name has recovered its brightness and sense of progress. Also, now we associate his name with the altruism of a person who never sought to enrich himself, only to put science at the service of humanity.

Everybody Can Become a Genius
for you to find yourself. However, I'm sure that there's something you feel passionate about, and you might even be a genius at it without even knowing. Read more »
Link copied!
Interesting Articles
Psychology
Why is Gender-based Violence Increasing Around the World?

Psychology
Balanced Thinking: a Perspective in Harmony with the World

Psychology
No One Is Worth More Than You

No one is worth more than you. Do not let anyone make you doubt your abilities. Neither your skin color, your sex nor your money defines your potential or your…

Psychology
In Order To Be Happy, I Make Decisions

We are constantly making decisions, either consciously or unconsciously. We direct our path with the choices we make, from more…