The True Story of John Nash, the Tormented Genius 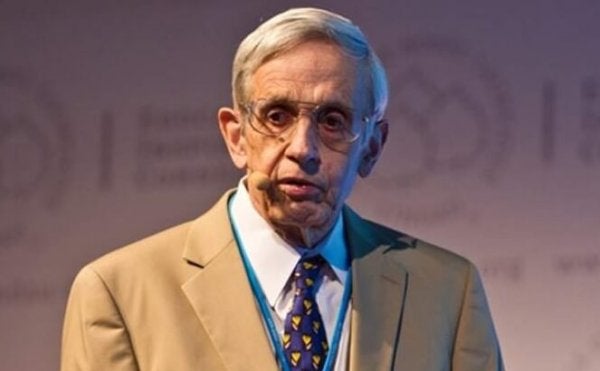 We first heard about John Nash when he won the Nobel Prize in Economics in 1994. Later, thanks to the movie A Brilliant Mind (based on a book of the same name), we learned the extraordinary story behind this math genius.

John Forbes Nash was born on June 13th, 1928, in a small town in Virginia. From a young age, he was introverted and lacked social skills. He had a solitary childhood and adolescence. Though he didn’t play much with other children, he was very curious about books. His mother, far from dissuading him, encouraged him to cultivate his intellect.

Contrary to what you might think and unlike many other geniuses, John Nash didn’t get good grades in school. He was so socially awkward that a lot of his teachers doubted his intellectual capacity. Some even suggested that he had a mild developmental delay. In spite of everything, Nash loved doing scientific experiments in the privacy of his room.

“People are always selling the idea that people with mental illness are suffering. I think madness can be an escape. If things are not so good, you maybe want to imagine something better.”

When he was a teen, John Nash started to show an interest in math, but he was especially interested in chemistry. Some say he was involved in making some explosives at school. And tragically, someone set them off by mistake and caused a death.

In 1945, Nash won a scholarship to study at the Carnegie Institute of Technology. He was going to study chemical engineering, but John Synge, director of the Mathematics Department, convinced him to specialize in numbers. In 1948 he graduated with his math degree and got a scholarship at Princeton to do post-graduate work.

In 1949, as he was preparing for his doctorate, he wrote the article that would win him the Nobel Prize nearly 50 years later. His thesis title was “Non-Cooperative Games.” After that, he got a job at the RAND Corporation, a company that did scientific studies related to the cold war. Two years later he started working as a professor at MIT.

The shadow of schizophrenia

Up until this point, his story is similar to the story that they tell in the movie. But from this point on, the facts are different than how they appear in the film. John Nash had an illegitimate child with Eleanor Stier, which caused a big scandal in his family. Not long after that, his father died. Then, in 1954, police arrested Nash in a raid to catch homosexuals. That’s why his employers fired him from his job.

In 1957, Nash married Alicia Larde, a student of his of Salvadoran descent. They had a son together, but shortly after his birth, Nash divorced Alicia. Nash had schizophrenia and Alicia couldn’t put up with him. After that, Nash started a tour of Europe, where he tried to get political refugee status.

He never had visual hallucinations, only auditory ones. He thought he was the chosen one, some kind of religious figure. At the same time, he felt that there was a conspiracy against him orchestrated by the Soviet Union and the Vatican. “I started to hear something like telephone calls in my brain, from people who were opposed to my ideas,” he said.

Nash, an example of recovery from schizophrenia

John Nash recovered his sanity in a way that many categorize as a miracle. He was hospitalized eight times in different mental health centers. Doctors also treated him with high doses of medication and aggressive treatments such as electroshock therapy. According to his own testimony, he simply decided to stop paying attention to the voices that he heard.

One day, this mathematical genius stopped taking his prescribed medications. In an interview with Xavi Ayén, he said that there is a point at which medicine starts to do more harm than good. He also said that stopping medication is a very delicate and potentially dangerous process. Nevertheless, he stopped treatment and a few years later he was cured.

Nash lived for a time with his ex-wife, Alicia after getting sick. She claimed that there was nothing miraculous about Nash’s situation. She said, “it’s all about living a peaceful life.”

In 1996, Felice Lieh Mak, the president of the World Psychiatric Association, introduced him as “a symbol of hope, an explorer of the limitless universe of the mind.” There are several encouraging and also disconcerting things about his story. One is that his life is proof that schizophrenia doesn’t have to be the end of someone’s life. It is also an inspiration for all those searching for more effective treatment.

Culture
The Fours Laws of Spirituality

They say there's a brief moment in life, when you feel more lost than ever, when an encounter occurs. An encounter…