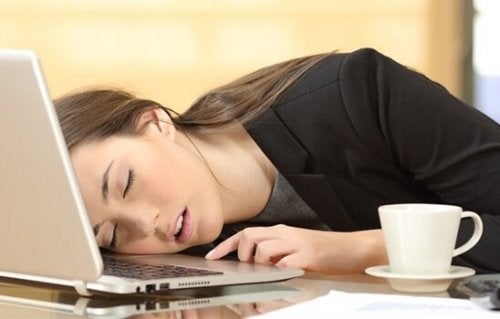 Many people say that narcolepsy is more a curse than a disease. It’s a chronic sleep and neurological disorder where, in addition to excessive sleepiness, patients can experience sudden sleep paralysis, hallucinations, and even fainting. In this article, we’ll be looking at the symptoms and treatment of narcolepsy.

Narcolepsy is both disabling and peculiar at the same time. It has a very low incidence in the general population. This condition, which is also called Gelineau syndrome, still doesn’t have a cure. However, there are different treatments that help ensure that the patient has a reasonable quality of life and is able to take control of their daily life.

Dr. Meir H. Kryger, an expert in medicine and sleep psychology, says that there are few disorders more complex than narcolepsy. He explains in one of his articles that he has treated patients who, instead of receiving a diagnosis of narcolepsy, had been erroneously diagnosed with schizophrenia.

Children and adolescents can be erroneously diagnosed due to the hallucinations the condition can cause. They see imaginary objects and people and these types of experiences traumatize them.

Living in a world where one can’t tell the difference between what’s real and what belongs in the dream world isn’t easy. It’s a life full of fear and frustration since the patient isn’t able to control their own body.

Narcolepsy is a neurological condition, but scientists still don’t understand what triggers it. One thing experts have been able to clarify is that it’s a hereditary disease. There are certain genetic markers that determine whether a person is going to be at risk of suffering it or not.

Another characteristic of narcolepsy is that it’s an autoimmune disease. For unknown reasons, the body attacks itself, alters certain processes, and reverses the body’s patterns and cycles. That’s why their sleep patterns are disturbed and they experience dreams and nightmares while they’re still awake.

When we think of a narcoleptic, we imagine a person who can completely collapse from one second to the next. We think of someone who sleeps excessively and who suffers from sleepwalking at night. However, it’s much more than that. Here are some of the symptoms of narcolepsy:

Narcolepsy affects men and women equally and even affects animals. Each patient’s treatment will be different according to their individual needs. Here are the most common treatment strategies:

To conclude, although the prevalence of this disease is low, it can greatly affect the patient’s day to day life. Moreover, it’s also common for the patient to feel that they’ve lost control and that they’re losing their mind, especially if the hallucinations are frequent. However, with the help of good medical professionals and suitable treatment, the patient may greatly improve.

We should be more sensitive to those who suffer from this sleep disorder and treat their condition as something quite normal and not out of the ordinary.

Busting 5 Sleepwalking Myths
There are many myths about sleepwalking. Most of these myths are false and can have negative consequences for the sleepwalker. Read on! Read more »
Link copied!
Interesting Articles
Literature and Psychology
Three Great Short Legends for Children

Culture
Emotional Intelligence to Heal the Wounds of Our Relationships

We know that relationships, like bones, also break. However, those fractures don't always heal as fast as we think. Time…

Trying to be liked is human nature. Many people learned at a very young age to seek the approval of…