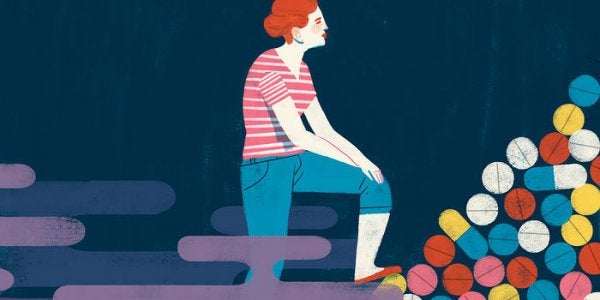 It’s been almost three years since I started suffering panic and anxiety attacks. It’s gotten a lot more intense in the past few months. There were days when I felt like I couldn’t leave the house, or my head, or the darkness of my closed blinds. After one year taking anxiolytics my psychiatrist prescribed me antidepressants. She gave me fluoxetine, at a low dose, just to start out…

This ordinary testimony reflects the currently reality for millions of people. It doesn’t matter about their origins, gender, country, or social class because depression, the all-consuming shadow, multidimensional and yet unique en every mind and body, affects more than 350 million people all over the world.

Depression isn’t sadness, it’s a lack of liveliness. It’s desperation, darkness, and a loss of meaning towards oneself and towards life…

There’s nothing strange about that, though, because our antidepressant consumption has doubled in the last 10 years. Is it possible we’ve forgotten about how to “be happy?” Or are health professionals choosing the easy route of pills for the problems life can bring? The answer to these questions is still up in the air. They’re not easy to respond to because there are other variables on top of those factors: the current economic recession, a pharmaceutical industry that’s fighting to have a chemical solution for every bit of sadness, pain, or discomfort…

The biological focus for treatments for “unhappiness” is growing, we’re well aware of that. But this bitter cocktail that contains ingredients like life’s pain, apathy, lack of motivation, and desperation can’t be blown to bits. That is, antidepressants aren’t effective in every situation. In fact, doctors are currently over-treating different kinds of disorders with unsuitable medications.

An antidepressant isn’t like a makeup you can use to cover up a bruise or scrape on your face. What professionals need  to do first is make sure they have the right diagnosis, and understand that in the majority of cases, like with minor depression, it isn’t necessary to prescribe this kind of medication.

Let’s look at this in more detail, let’s learn more about antidepressants.

Antidepressants – when to use them?

When someone prescribes an antidepressant for a patient, two things usually happen. The first is that the patient becomes truly aware of their illness, their personal reality, and the problem they have to confront. The second thing that happens almost every time is a combination of fear and doubt. What’s going to happen now? What side effects will I experience? How is my day to day life going to change?

Another thing that usually happens all too often is that there are patients who go from one antidepressant to another. They try out brands, adjusting their doses, gaining wait, losing weight, sleeping more, sleeping less, and scrolling through internet forums about the most effective types of antidepressants – is it Sertraline, Fluoxetine, Paroxetine, or Bupropion?

Seeing all this, and also adding that there are always articles that cast some doubt onto how efficient these medications are, we should understand why there’s usually so much controversy about the use and administration of these drugs. That’s why it’s worth clearing up a few different points.

What do people take antidepressants for?

The answer to whether antidepressants are effective is “yes.” But there are some question marks as they’re not useful for minor depression. They do nothing to increase your mood after a breakup, or to get through pain, or to help you confront your fear of flying or public speaking.

We can’t medicate all the problems in our lives, but we can medicate the most intense illnesses, as is the case with major depression. It’s a disorder that also isn’t being treated as much as it should. In fact, we know that around 16 million people in the US suffer from it, but still haven’t taken the step to ask for help or get treatment.

The pharmaceutical market offers us different options of antidepressants based on how they’re taken, how long they take to work, and the side-effects that come with them. Even though they all have the same end goal, a doctor should consider different factors before prescribing one over another.

Now we’ll look at what types of antidepressants you might encounter.

Many specialists tend to start with these kinds of antidepressants. They’re the ones that usually have the least side effects (but we should remember that everybody reacts differently). Some of the medications that are examples of selective serotonin reuptake inhibitors are fluoxetine (Prozac, Sarafe), paroxetine (Paxil, Pexeva), sertraline (Zoloft), citalopram (Celexa), and escitalopram (Lexapro).

They’re most commonly used in clinical practice and they’re psychopharmaceuticals that work, as their name suggests, by specifically inhibiting our re-absorption of serotonin, without affecting other neurotransmitters.

In this case we’re looking at medications like venlaxafine and duloxetine. The way these medications work is by preventing our reuptake, or reabsorption of serotonin and norepinephrine. When they work against these two neurotransmitters, they tend to have an extremely quick effect.

“You largely constructed your depression. It wasn’t give to you. Therefore, you can deconstruct it.”
–Albert Ellis-

Until recently these were the most commonly prescribed antidepressants. They have almost the exact same effect as the ones we just talked about, that is, stopping our reuptake of serotonin and norepinephrine. But they’re more unpredictable and can generally have an impact on other hormones, like acetylcholine, histamine, and dopamine. Because of this imprecise, uncontrollable effect, they can be very addictive, dangerous kinds of medication.

Until recently, these were one of the most commonly used types of antidepressant. But luckily, seeing the risk factors, the pharmaceutical industry has brought other options to the market, like “selective” inhibitors of serotonin and norepinephrine that don’t affect other hormones.

But these kinds of antidepressants are still used in very specific situations and extremely serious cases of major depression.

Later on came a second sub-group, reversible monoamine oxidase inhibitors (RIMAs), which have a lower risk factor. But like we said, because they’re so much older it’s more common to use the antidepressants that work by inhibiting serotonin reuptake.

Side effects of antidepressants

As we’ve seen, every antidepressant has a higher or lower degree of associated side effects. The oldest medications (the tricyclical ones) are just as effective as the new ones (SSRIs), but they’re much more dangerous. That’s why the specialist will always be the one who determines which one to start with, what dose to prescribe, and how long the treatment should last. This should be somewhere between 6 and 18 months.

Now let’s look at some of the associated side effects.

It’s not common for these to be prescribed nowadays. They cause hypertension and are very dangerous when they interact with any foods that have tyramine (certain kinds of fish, nuts, cheeses, certain meats…)

They have the same side effects as the selective serotonin reuptake inhibitors, or SSRIs.

It’s also worth remembering that tricyclical antidepressants are very dangerous in the case of an overdose.

Many antidepressants can produce tolerance and dependence. This is really important to keep in mind, especially when we’re talking about tryclicals. Coming off antidepressants must also be supervised by a doctor. There can be a relatively intense period of withdrawal, so you have to be very careful with how you go about stopping these medications. The ideal is to stop taking them over time and let the body adapt to the new situation little by little.

“Although the world is full of suffering, it is also full of the overcoming of it.”
-Helen Keller-

And as we’ve suggested in this article, antidepressants aren’t the only, exclusive response to depression treatment. This is especially true with major depression. They’re an essential, effective, and necessary tool you have to mix with psychological help and a cognitive-behavioral focus that will help you overcome these difficult, complex realities.

Depression Is Harder Than What Metaphors Say
People love using metaphors for depression. It seems that it inevitably brings us sadness, and sadness brings us to an "ocean." Or rather, to a "deep dark pit"... Read more »
Link copied!
Interesting Articles
Culture
Maslow's theory of human needs

Abraham Maslow is the founder and main figure in human psychology. He created the hierarchy of human needs, which he…

Culture
The Myth of Apollo, the God of Prophecy

The myth of Apollo is about the most revered god in Greek antiquity, after Zeus. He was very important, so…

The idea that someone out there is the "love of your life" is quite popular. In some way, it's similar…

Culture
What is a Minimalist Lifestyle?

Architect and writer John Pawson says that "minimalism, more than an architecture, is a way of life". This is exactly how…

As of now, many life situations are still in confinement. They say each household is a world in itself... and…