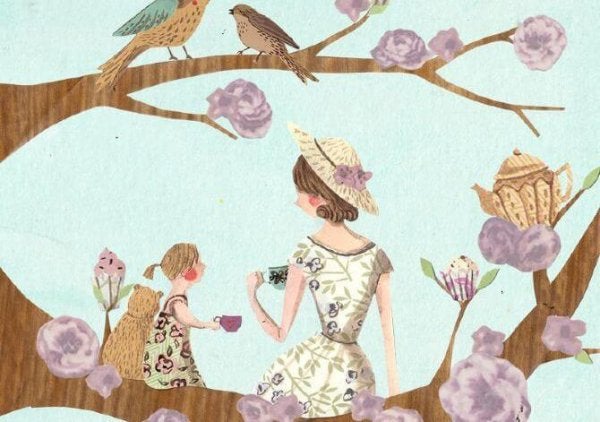 Very often mothers feel invaded by fear of the fate of their children. How could they not be afraid in a world in which there is danger, ranging from falling and scraping their knee, to unthinkable situations such as kidnappings or death from a newly discovered virus?

“The hand that rocks the cradle rules the world.”

The problem itself is not fear, but rather the strategy employed to address it. A fearful mother can transform her fears into a reasonable prudence, but can also succumb to them and become a “mother hen”.

“Mother hen” colloquially refers to all those mothers who want to keep their “offspring” under their wings, “curled up” as the nursery rhyme says. They seek to extend a protective blanket that insulates them from all the risks and dangers that can happen in the world.

Their conscious intention is perfectly understandable: they want to prevent their little ones from experiencing unpleasant, or perhaps traumatic experiences. They do not want them to be exposed to tough situations that may affect them physically or emotionally.

These mothers feel that their children are extremely fragile beings. Of course, to a large extent, every child is, as they have not reached their full physical and psychological development and are therefore vulnerable to multiple risks. The “mother hen” wants to make sure that none of those risks reach their children.

One of the techniques used by the “mother hens” is constantly warning their children about the dangers of the world. “If you go near the stove, you can get burned.” “Careful while playing with the ball, you can fall and break a bone.” “Don’t go out into the street, there are people who steal children.”

So although their intentions are very tender, eventually they end up creating a catalog of horror for their children. They are taught to move around the world in terms of fear. Well, this “moving around the world” is a figure of speech, because ultimately they encourage them to not move, since almost every situation involves a risk.

As children are growing and require increasingly wider spaces to take action in the world, the “mother hens” start controlling and blaming. They establish mechanisms to keep their children under surveillance permanently and make their attempts at autonomy seem like an aggression towards the mothers.

The children of the “mother hen”

The “mother hens” believe that what they want is the happiness of their children. Their concept of “happiness” is the absence of mishaps. They think that if they bring the kids to adulthood without being scratched by any suffering, they have done a great job.

The contradiction of the matter is that the children of these mothers eventually end up experiencing the opposite. They experience excessive emotional stress resulting from anxiety felt by their mother, who is warning them all the time, imagining the worst situations and thus filling them with fear.

That’s why they practically can’t enjoy anything. When they are very young they do not want to upset their mother and her warnings become demands that must be followed exactly. If the relationship is not good or maternal demands become excessive, the opposite happens: the child constantly challenges dangers as a way of claiming independence.

Both the very passive, obedient child and the very uneasy, defiant child end up attracting new problems. They find it hard to trust themselves and the world. They fail to adapt creatively to difficult situations and develop their exploration of the world with strong feelings of restlessness. Very often these children become difficult adolescents over the years.

Thus a story is written in which no one wins. Both mother and child will develop a relationship pattern that alternates between extreme dependence and episodes of abrupt separation. Blame will be the center of everything and none of those who are involved will have peace.

The “mother hens” are also called “chickens” for their stubborn attachment to fear. They underestimate the capabilities of their children and project onto them their own sense of helplessness. They do not understand that every human being has a life and that life includes difficulties, problems and situations of risk and danger that we all must learn to overcome.

In fact, what makes us adults is having learned to overcome difficulties, mistakes and problems. That is what gives us confidence in who we are and what we can do. That’s what differentiates an adult “chick” from a strong and healthy adult.

Childhood is one of the most important stages in the life of every human being. Their perception of themselves and the world… More »

Every day, at any place and circumstance, we expose ourselves to being in the middle of a conflict. In order…

Psychology
The 8 Best Books on Psychoanalysis

Psychoanalysis is a fascinating field: its theories and hypotheses are just captivating. Although that's true, some books on psychoanalysis, especially by…

Psychology
Is There Such a Thing as Positive Jealousy?

Jealousy is a part of our human condition. There are millions of references to it and it has always been considered…