A relationship needs more commitment and less sacrifice. Read on to learn more! 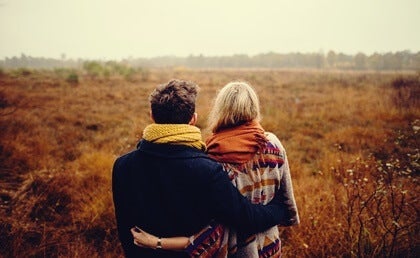 A relationship needs more commitment and less sacrifice. However, many people believe that true love requires sacrifices and constant concessions and that, the bigger they are, the more authentic the bond will be. Assuming this premise can lead you to erect unilateral power relations licensed for emotional extortion and loss of identity.

Some things aren’t acceptable when it comes to love. Graham Greene said that everyone comes into this world with an authentic and noble notion of love but ends up misusing it at some point along the way. Perhaps it’s all due to the classic model of romanticism people have been brought up with. The one that’s made us believe for a long time that love and pain or sacrifice go hand in hand.

In fact, you’ve so intertwined affection with the idea of ​​sacrifice that you seem to evaluate love through these two ingredients. Seeing love through this prism leads you to understand this feeling as a kind of ancestral god who demands special treatment and painful offerings before you’re truly worthy of their love.

Thus, avoid going to such extremes. Instead, understand that, although relationships sometimes require sacrifices, this practice shouldn’t become the norm. Authentic love requires commitment above all. It must be a source of daily fulfillment and never a pyre of suffering.

“What a shame that love has no dictionary in which to ascertain when pride is simply pride and when it’s “dignity!”’

Sacrifices are sometimes necessary. There are times when you hope that your significant other will take an important step such as leaving their hometown to start a life with you. They must leave their job, postpone a project, etc. Then, there are other times when they must travel many miles and uproot, move, reformulate their future, and make new goals, etc.

However, these actions must always be carried out of their own free will. Furthermore, a person must interpret them as a benefit and never as something painful. They must believe they’re gaining something so the sensation of loss is minimal. Therefore, there must be an adequate balance. They should also interpret it as a useful action that’ll strengthen their bond. That’s a courageous decision that’ll further strengthen their commitment.

On the contrary, sacrifice seldom feeds one’s commitment because it’s usually painful. There’s a sense of loss for those who carry it out, and such an experience comes at a cost. Thus, there’s something important to reflect on studies such as the one conducted at the University of Toronto and the University of California, Berkeley.

Humans often underestimate the great impact that these dynamics can have. Continued concessions and renunciations completely erode people’s emotional structures and even the boundaries of their identity.

The emotional cost of continued sacrifice

The aforementioned study was conducted in a three-year period. 80 couples participated in order to discover the impact sacrifices could have in a relationship.

When sacrifices were constant and the person didn’t express the emotional cost of such actions, they became frustrated, had self-esteem problems, and were deeply unhappy.

A relationship needs more commitment and less sacrifice. Thus, in the event that you must make a concession for your loved one, you must clearly state the emotional and personal cost that this entails. Actually, you must verbalize feelings and record what each action entails.

A relationship needs more commitment and less sacrifice, everyone knows that. Right? However, people continue to be conditioned by the idea that love and sacrifice go hand in hand. Therefore, it’s common to opt for silencing the weight of each concession. In fact, others go so far as to rationalize them thinking that it’s the best thing for the relationship, that they must do it.

Thus, there may be situations where someone tries to tell themselves that leaving their job was the best thing, that abandoning that hobby, that house, that project, that tradition, or that friendship is the right thing to do. Because, after all, love is what truly matters. People can usually maintain this reasoning for a month or even a year.

However, there’ll come a time when there’s no balance. The day will come when losses are greater than gains and this is when frustration emerges. There may even be hate towards that person for whom, one day, you gave up your own identity.

You must understand that loving doesn’t equal making sacrifices. Every relationship must promote your personal development, not impair it. Therefore, a relationship requires more commitment and less sacrifice and, as such, you can do for one another almost anything that improves the quality of your bond. But be clear about the signs and don’t ever agree to something that makes you lose your identity!

Commitment in Relationships
Most people see commitment in relationships as a good thing, but what happens when it goes too far? Read on to learn more! Read more »
Link copied!
Interesting Articles
Romantic Relationships
A Love Letter - Thanks for Being You

Romantic Relationships
Are Women Who Play Hard to Get More Attractive?

Women who play hard to get tend to create obstacles during the love conquest. Traditionally, people think that this attitude…

Messages that say "Good morning, I miss you" or "How is your day going?" are simple gestures that enrich our…